Hello dear readers. Here we come to the last but one post. In fact, my journey is almost ending. I’m now in Cancun, from where tomorrow I’ll fly to legendary Cuba!

I recap the last days. From San Cristobal, I went to Oaxaca, a lovely city, where I met with Ketty, a friend from my hometown (Benevento), and her mate Gianluca. We visited the ruins of Monte Alban, the most important city of the Toltecs.
Then, we went to sea in the village Mazunte, a bit ‘south of Puerto Escondido. We didn’t do many baths because the sea was rough, as often on the Pacific side. However, the sweet laziness of the town shrouded us pleasantly for few days.
In the next village, San Agustin, we sat for a couple of hours in front of spectacular waves higher about 3 meters. On the beach of Zipolite, it seemed as if just passed a tsunami because a few days before some storms had caused enormous damage.

I went back to San Cristobal with them, and we visited Oventic, a small village about an hour by road, under control of the Zapatistas. On the wooden houses of the community, artistic murals are praising the EZLN and the revolution.

After, I left Ketty and Gianluca, and I moved towards the Yucatan. I stopped one day in Campeche, a tidy city with colorful houses, a beautiful promenade, and walls and bastions built after countless pirate attacks.

Now I’m in Cancun, a very touristic place where I had already been fifteen years ago. Walking the streets, I can’t figure out if I remember it or if I confuse with other tourist cities made ​​with the same stencil, perhaps on another continent or planet. Only the sea is really admirable, even the beaches are almost all fake, with the sand brought from elsewhere. Another problem: to reach the beach, often I need to pass through luxurious hotels full of rich ugly gringos(*).

(*) “Gringos” is the way in Central America the U.S.A citizens are called. It comes from “green go”, directed to the marines. 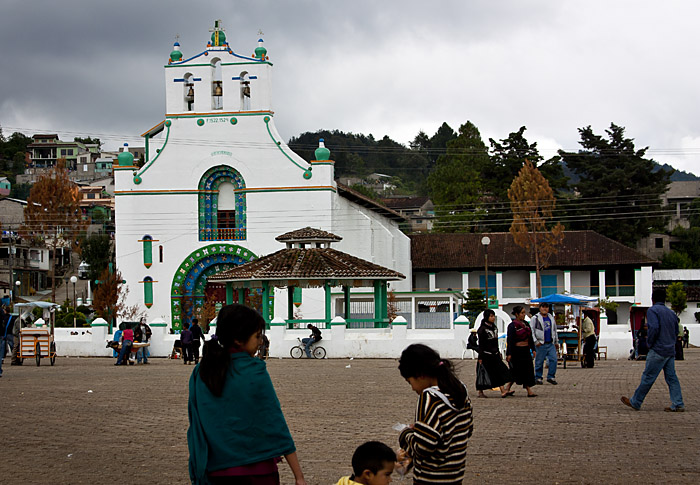 The church of Chamula, a town near San Cristobal, is one of the most evocative places visited during this trip. Inside, there is an evident syncretism between the Catholic religion and the ancient Mayan traditions. Unfortunately, it was not allowed to take pictures.
Dark, bare of decorations – the only are large flakes of colored cloth hanging from the ceiling. The floor is covered with pine needles and candles around which sit and pray the faithful, some of them with a chicken to sacrifice. By the walls, all around, there are tables with candles and statues of saints, often dressed in bright colors. There isn’t the altar, and the place of honor, on the top center, is reserved for St. John, patron of the city (San Juan de Chamula). Jesus himself is located in a less visible position, on the left side.
Before leaving San Cristobal, I saw in the museum of Mayan medicine that these rituals have specific rules, such as the number and color of candles to light, depending on whether it is to cast the evil eye, or be protected from envy, to heal from a disease, etc… Rituals handed down orally for thousands of years. 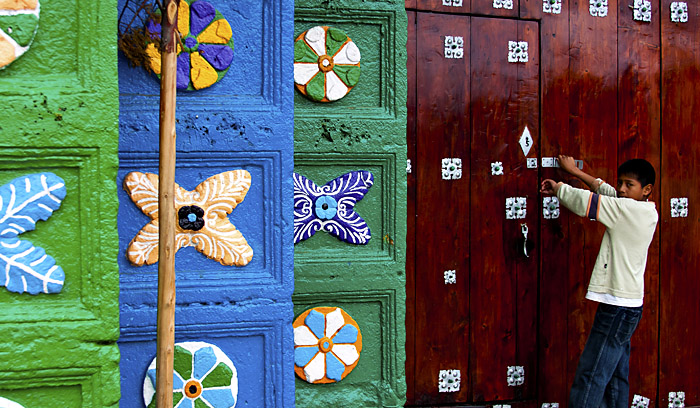 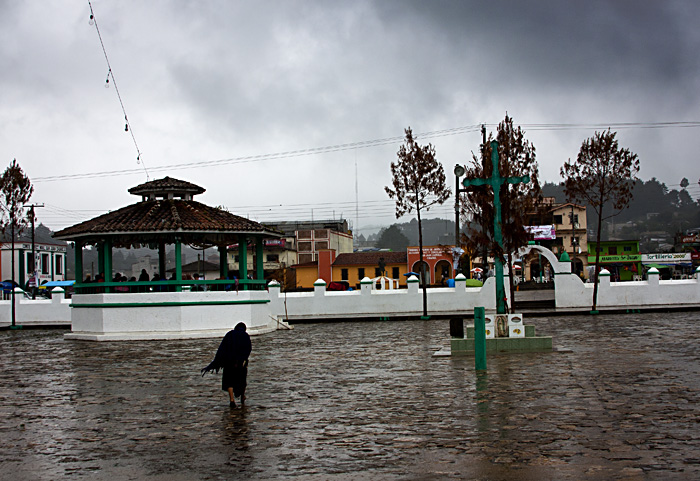 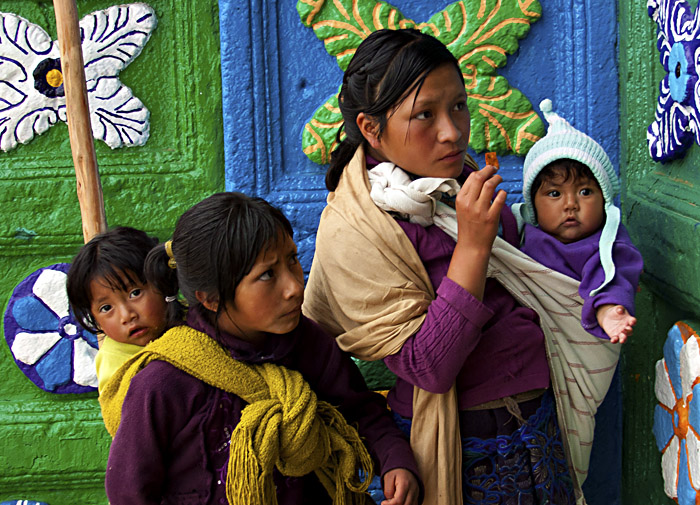 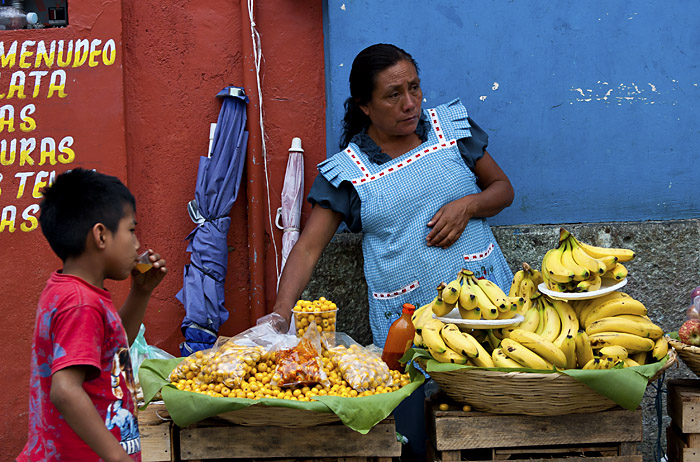 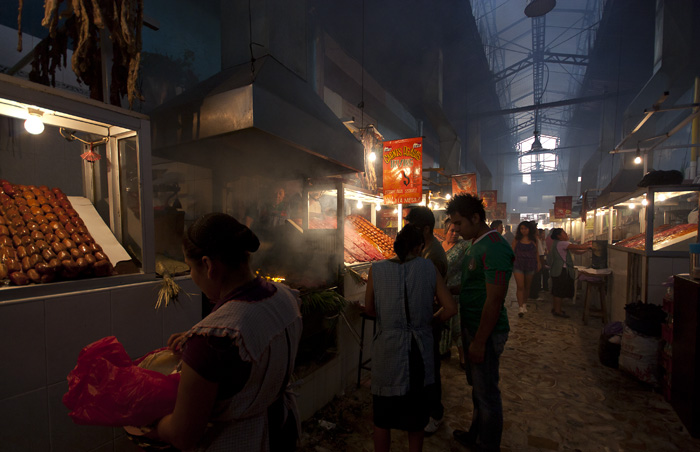 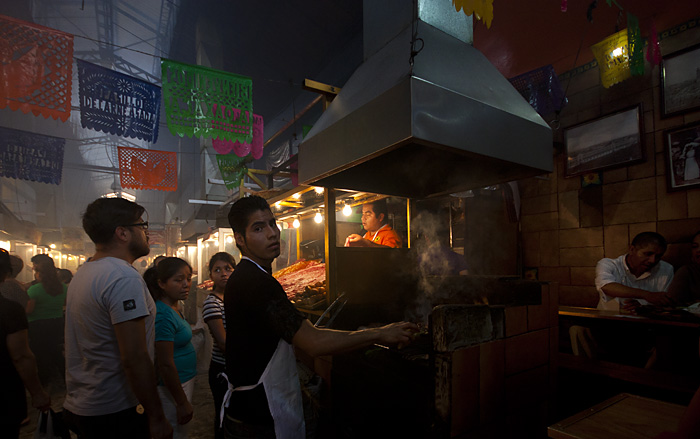 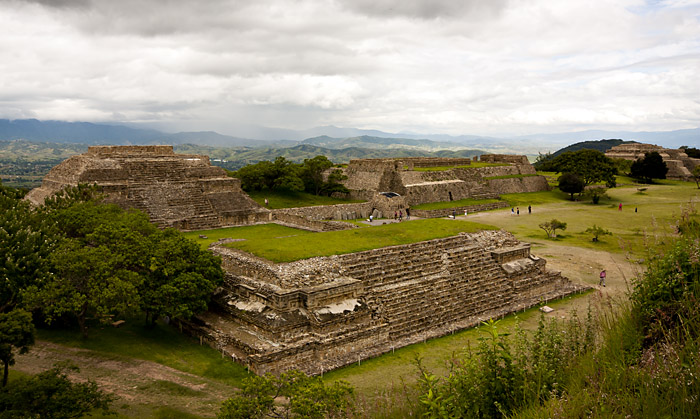 Monte Alban, near Oaxaca. For over a millennium, it was the most important city of the Toltecs. Founded around 500 BC, reached in the early centuries AD a population between 15,000 and 30,000 inhabitants. It was abandoned around 750 A.D. 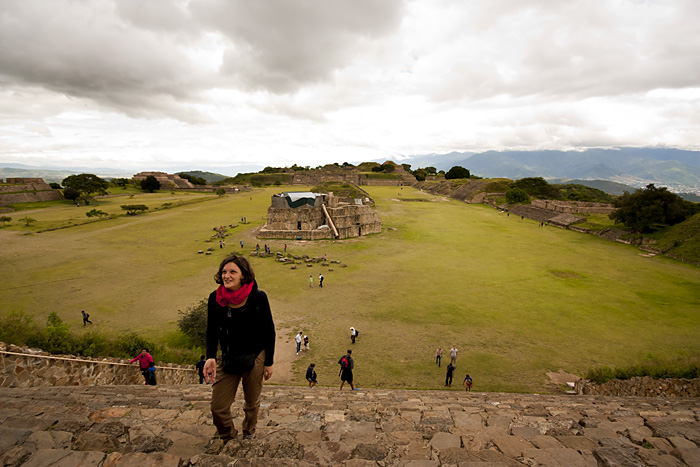 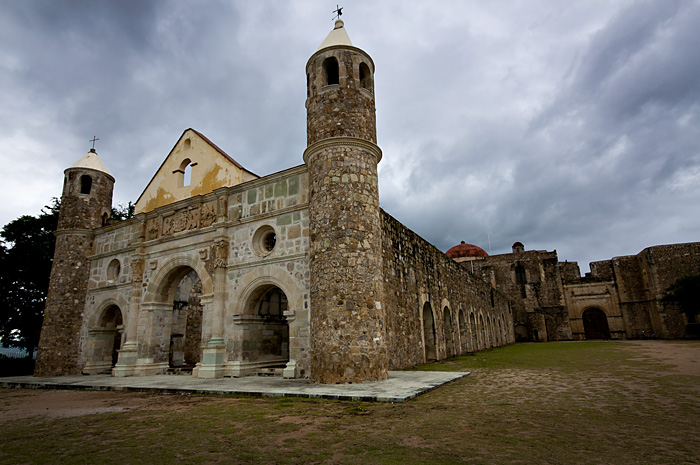 The monastery of Apostle Santiago, near Oaxaca. Beautiful, but, unfortunately, without a roof. It was never completed! 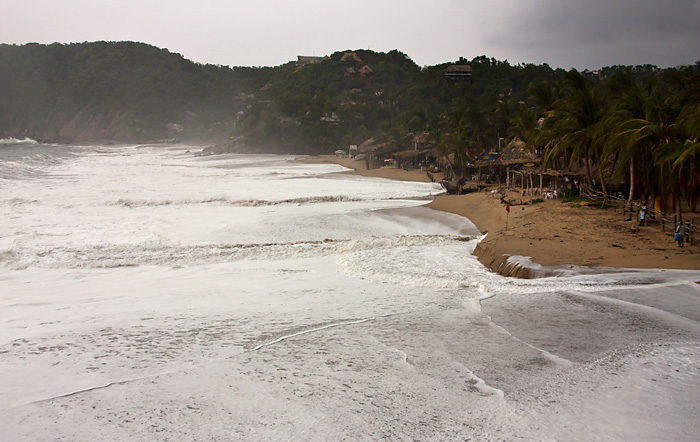 The Mazunte beach, near Puerto Escondido. The waves were almost arriving at my room. 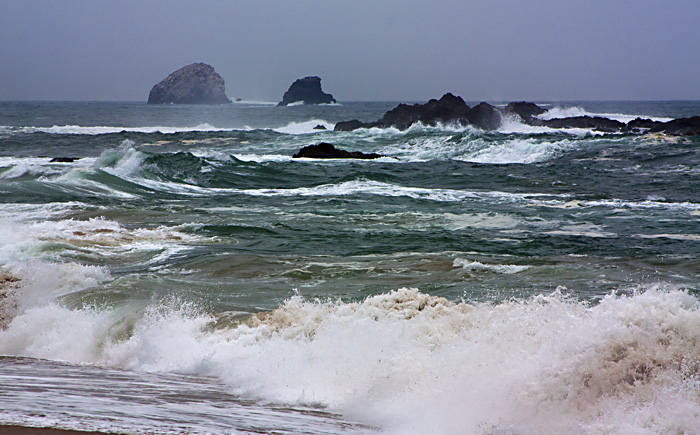 I’ll have another beer with friends. There will be a better time for swimming. 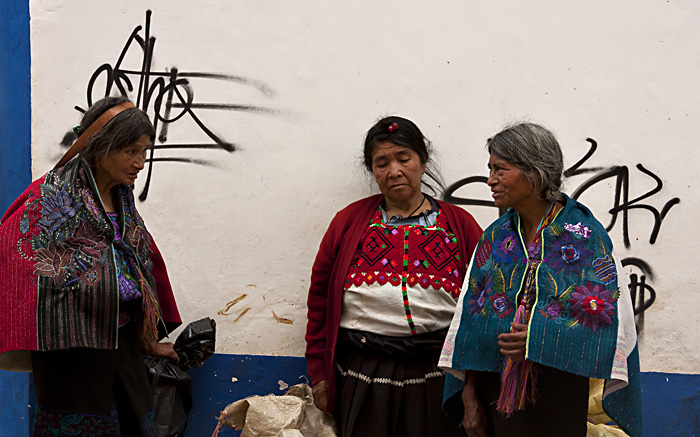 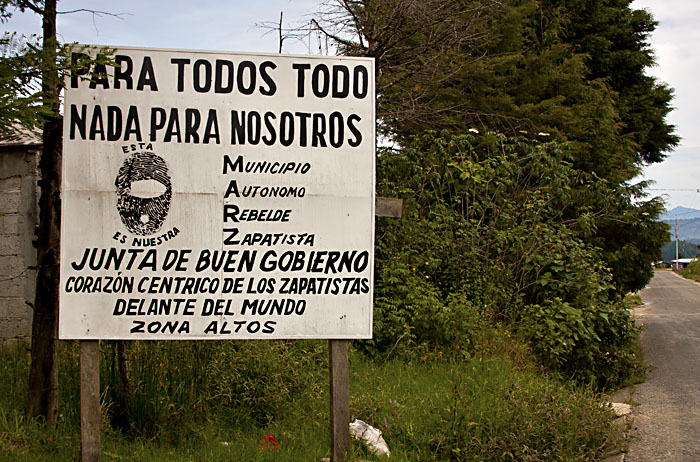 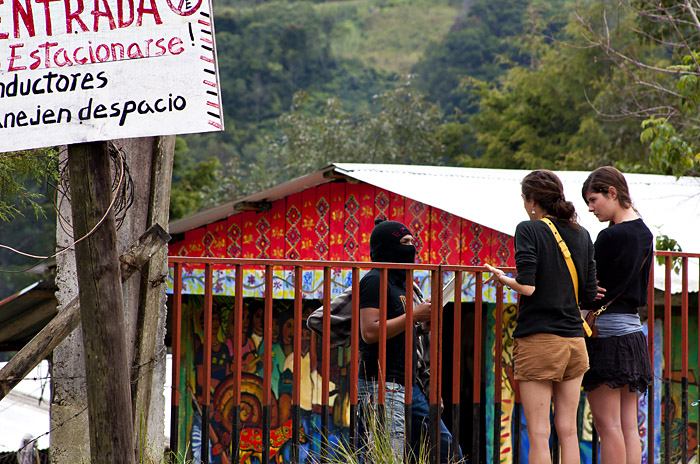 At the entrance, the Zapatistas ask some general questions to check what visitors know about the EZLN. Sometimes they keep with them the passports during the visit. To me, Ketty and Gianluca just asked name, nationality, and profession, and, a few minutes later, we were allowed in. Anyway, in case, we were very knowledgeable! 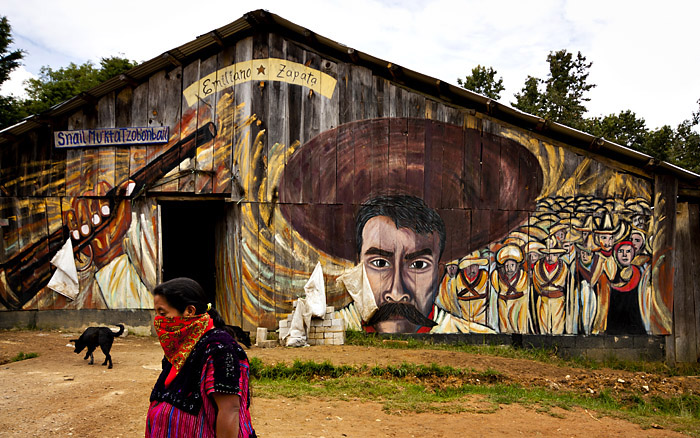 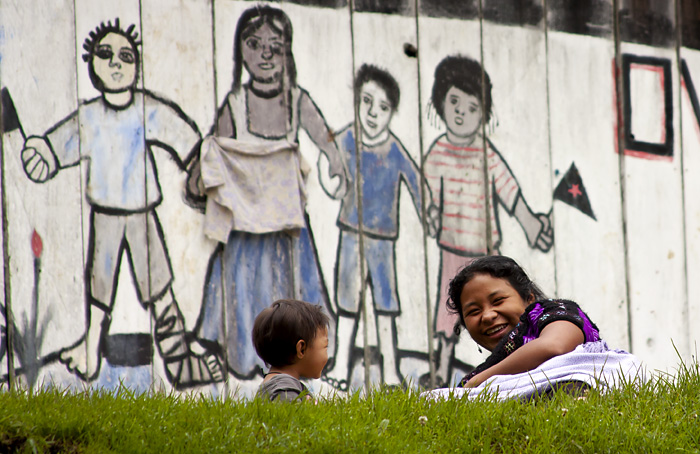 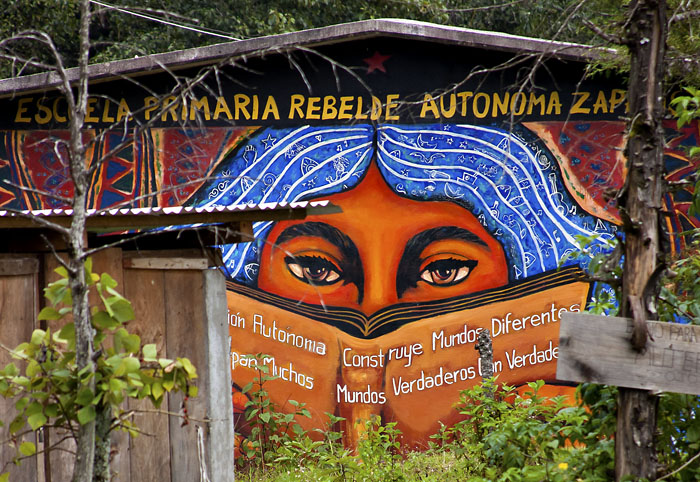 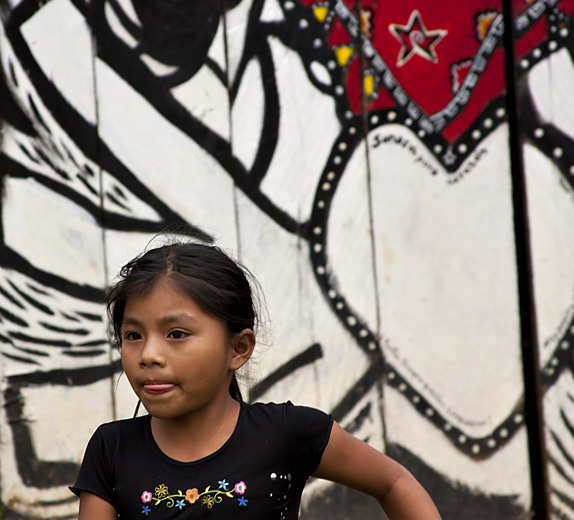 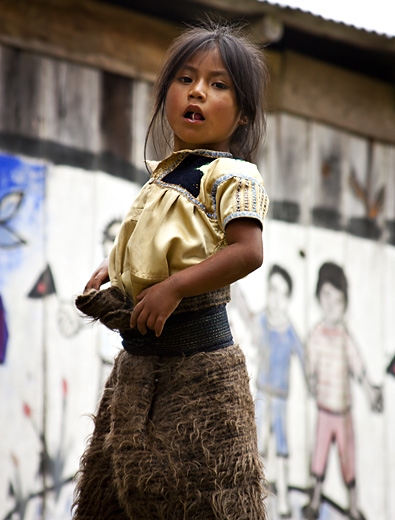 “Happiness doesn’t come by itself. Let’s walk to happiness”. 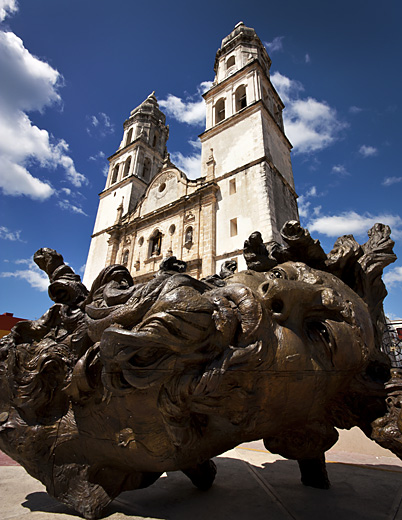 A sculpture in front of Campeche cathedral. 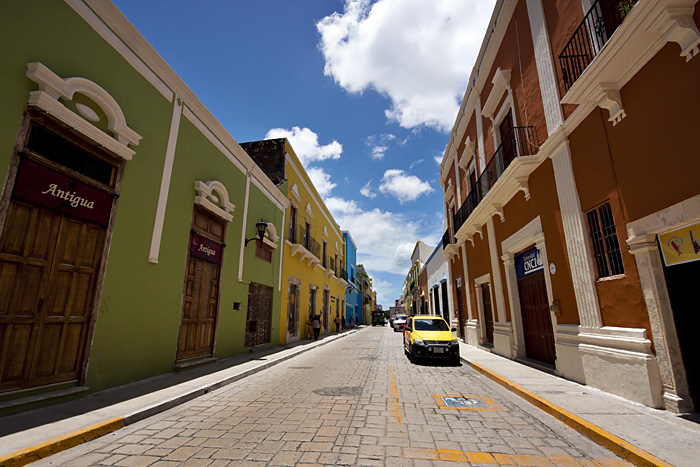 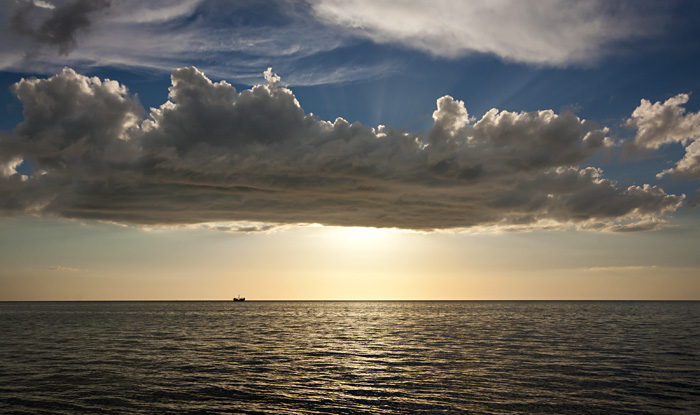