Hello everyone! I’m in San Jose, the capital of Costa Rica and I’ll tell you quickly what happened in the meantime. From the archipelago of San Blas (Kuna Yala) I and Aparicio went to Panama City thanks to a shift from a Colombian couple. After a few hours of roads shrouded by dense vegetation, the city appeared from a distance, with large, white modern skyscrapers.

The next day we visited it, but to be honest, we didn’t see much, as in those strange dreams where you have to do something simple, but you are continuously barred for some reason. Traffic jams, wrong bus stops, downpours, etc., prevented us from seeing the mirador of the Panama Canal and the old town.
It’s also true that there was not much to see because Panama city has been destroyed several times. The most recent invasion was in 1989 by U.S. Marines to get rid of the dictator Noriega, a faithful and brutal former ally, trained directly by the CIA, that eventually wasn’t anymore obeying the directives from Washington (the same fate that happened to many other cruel dictators, as for example Saddam Hussein).
The invasion killed nearly 3,000 civilians, more or less like the September 11 attacks. Still, because these casualties were Panamanian and not U.S., no one wrote that it was the “most heinous crime that humanity witnessed”,” the return of the era of barbarism”, and similar. No. Instead, in the mainstream history books, the invasion is officially remembered as a “surgical operation”. Yes, by Jack the Ripper.

From Panama City, we arrived on the Pacific coast at Santa Catalina, together with two girls we met on the bus: Eva, Slovak, and Stephanie, Canadian. It is a village known for surfing, but being low season, there was almost no one. We spent 3 beautiful days in a place overlooking the sea, perfect for drinking rum and wine at night.
I tried surfing for the second time in my life. The first time was in Bali about 15 years ago. I can now definitely say that is not my sport.
One day we went by motorboat to Coiba National Park , an island about 20 km from the coast, where until a few years ago, there was a penal colony. While snorkeling around there, we saw many colorful fishes and even a small shark, hidden under a rock.

From Santa Catilina, I, Aparicio, and Eva went to Bocas del Toro, on the Atlantic, passing through the spectacular national park La Amistad. Although a tourist place in some respects, the archipelago of Bocas del Toro is charming. And if the snorkeling in Santa Catalina has been so far the best regarding the fish seen, the one in Bocas del Toro was the best for the corals, gorgeous, as colored abstract compositions.

I thought that Panama was a place where there wasn’t much to see and do. Instead, even just with the places I’ve visited, it has nothing to envy to countries which are famous tourist destinations.

Finally, we arrived at Puerto Viejo in Costa Rica, still on the Atlantic Ocean. It was a place full of lunatic rasta men. There, we were reached by Jorge, a Costa Rican friend of Eva, and yesterday they gave me a ride until here in San Jose, through beautiful streets and parks. I will tell you about it in my next post.

Now I’m alone again, but tomorrow I will reach Aparicio that, instead of flying back to Brazil, has changed his mind and flight ticket at the last moment and is now on the Pacific coast. 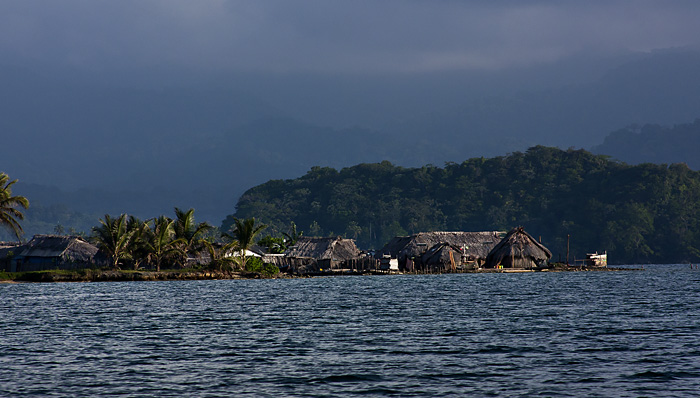 Another photo of Caledonia, the Kuna village in the archipelago of San Blas (Kuna Yala) in Panama. 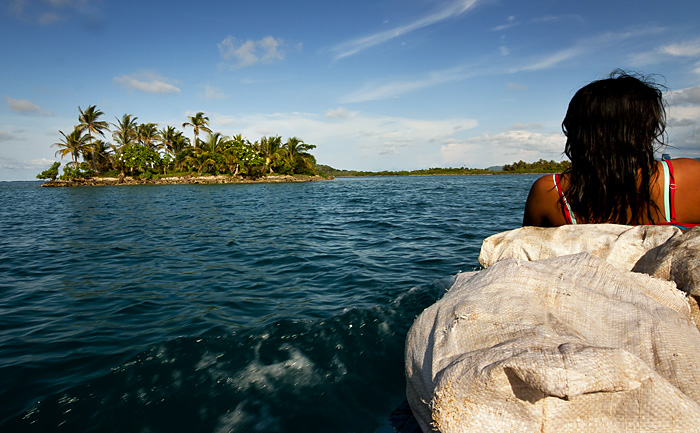 On a small boat in the archipelago of San Blas. 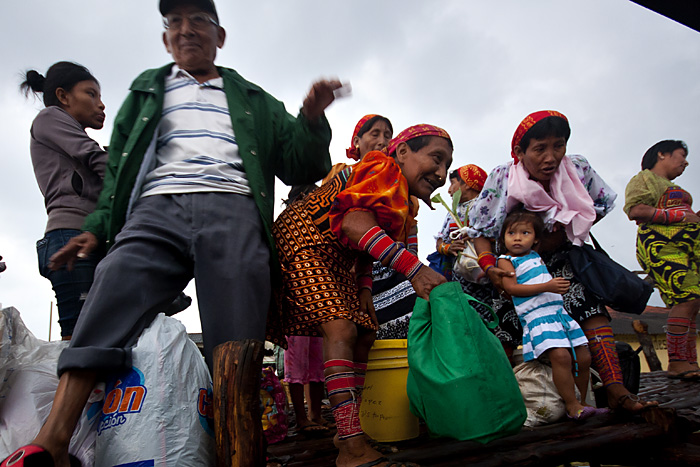 At the pier of a Kuna village. 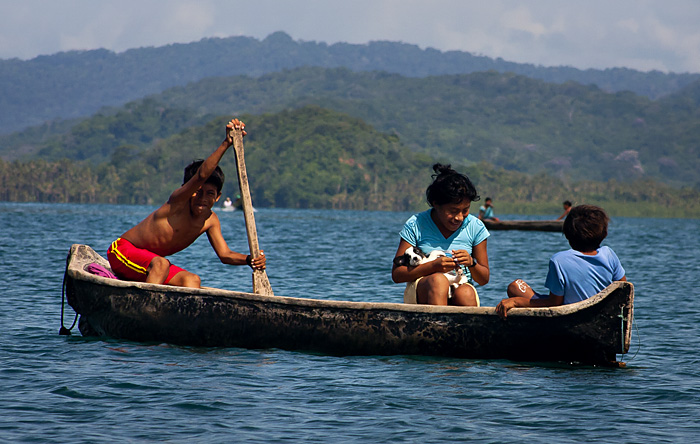 Canoe with a little dog. 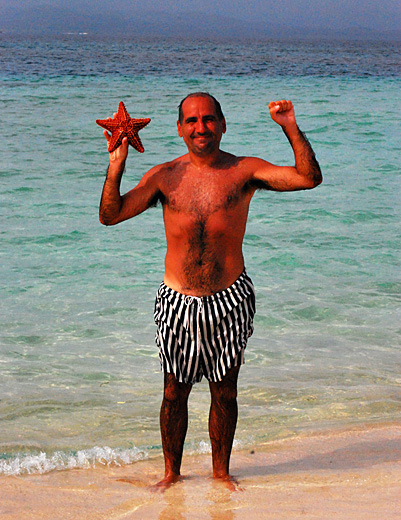 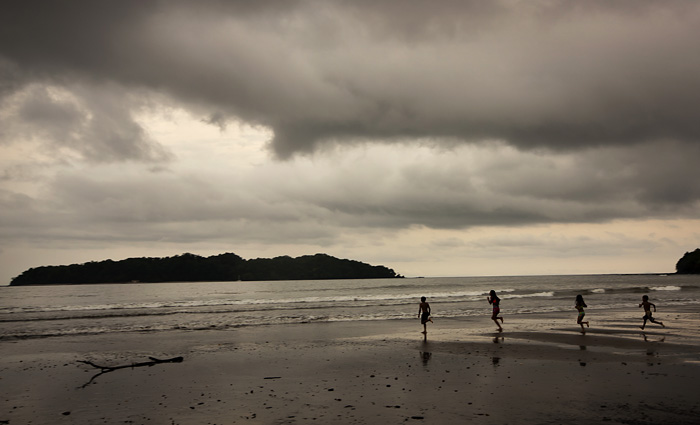 On the Pacific side, the Santa Catalina beach. 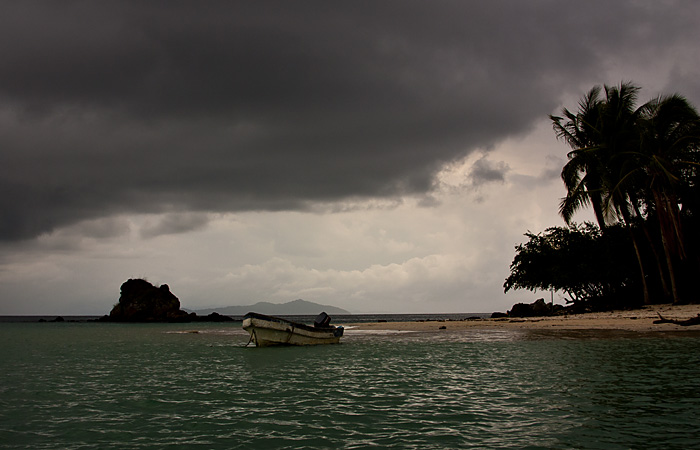 An island of Coiba national park. 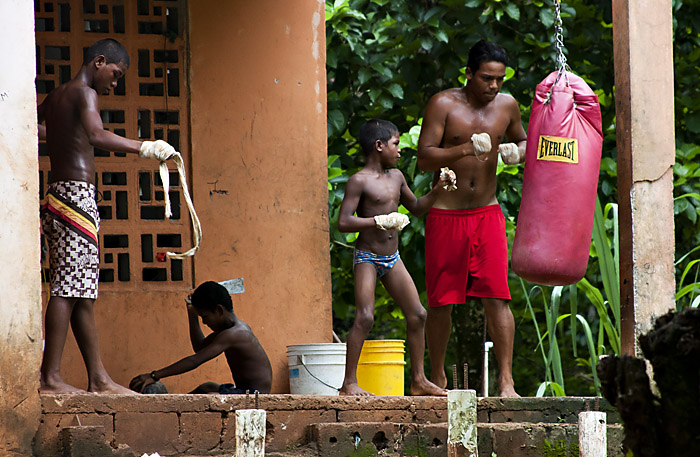 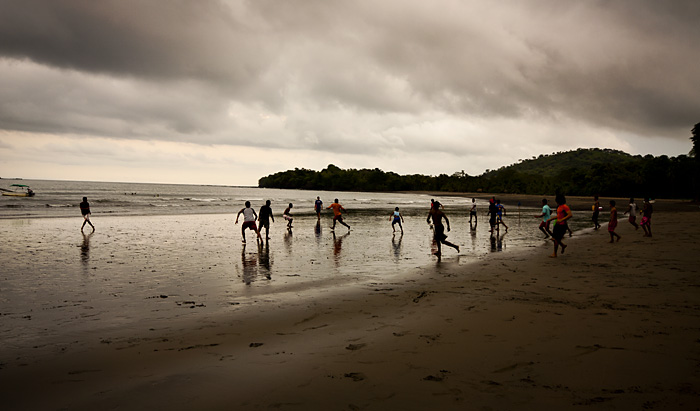 Football match on the beach. 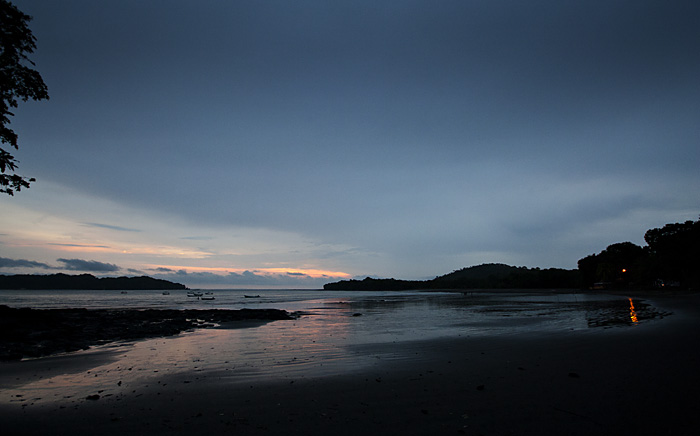 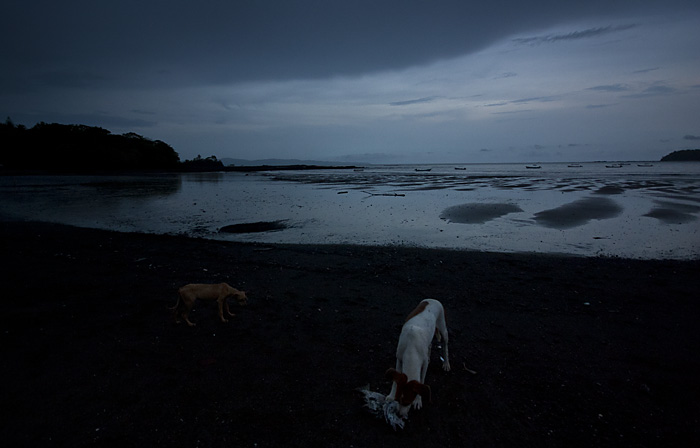 Dogs on the beach in the evening. 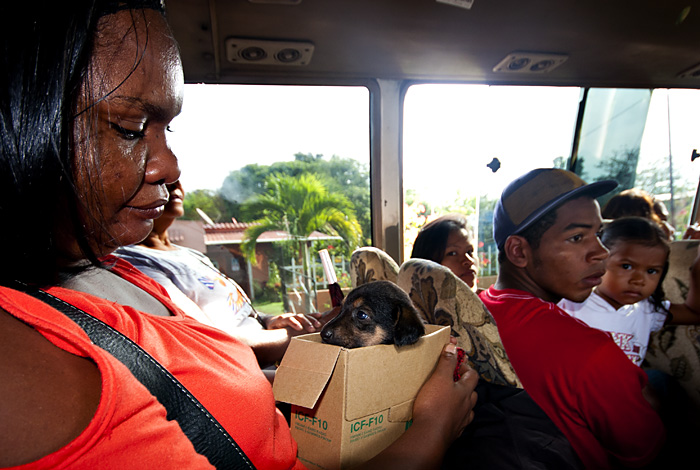 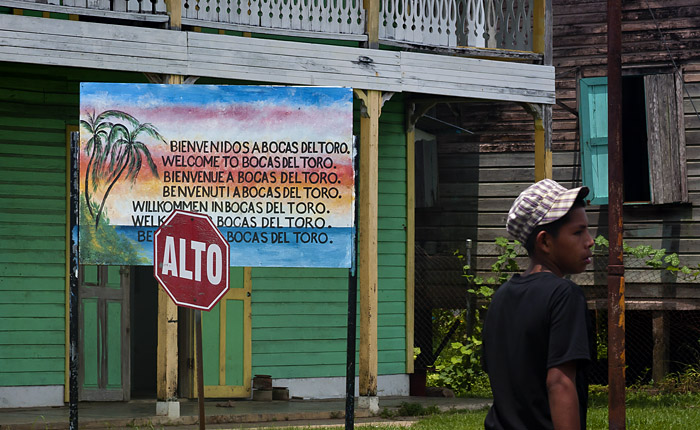 In Bocas del Toro, again on the Atlantic, almost at the border with Costa Rica. 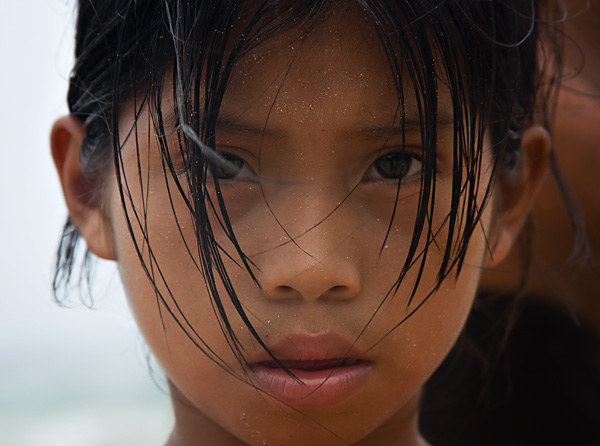 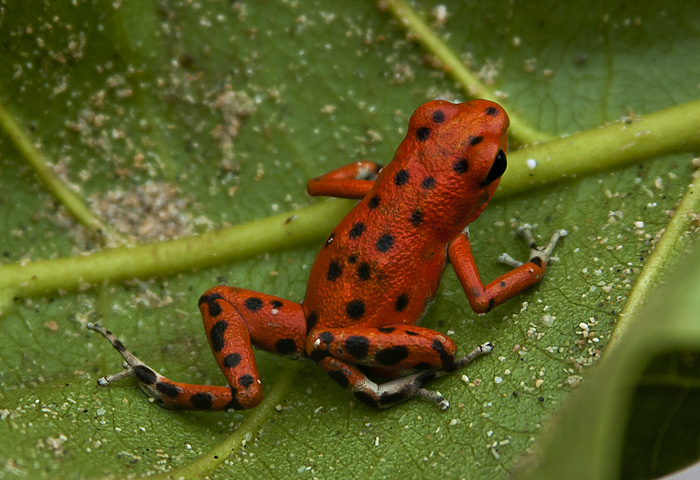 The typical red frog, actually red-black, of Panama and Costa Rica. Its skin is poisoned. It is called ‘dart frog’ because the natives used them to poison their arrows. It is said that taken in small doses, the poison gives a hallucinogenic effect. Jorge, the Costa Rican guy, once accidentally touched one, and its poison passed into his blood through a small wound. He risked dying! 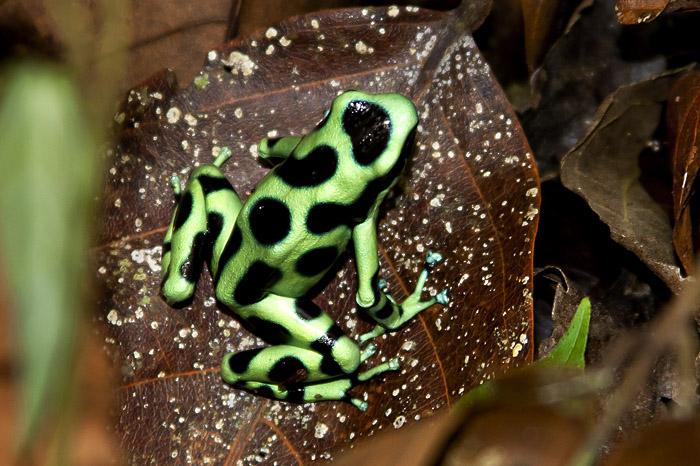 And this is the green frog, also poisonous. As already said in the post on the lost city the temptation to make a ‘hallucinogenic’ lick was very strong! 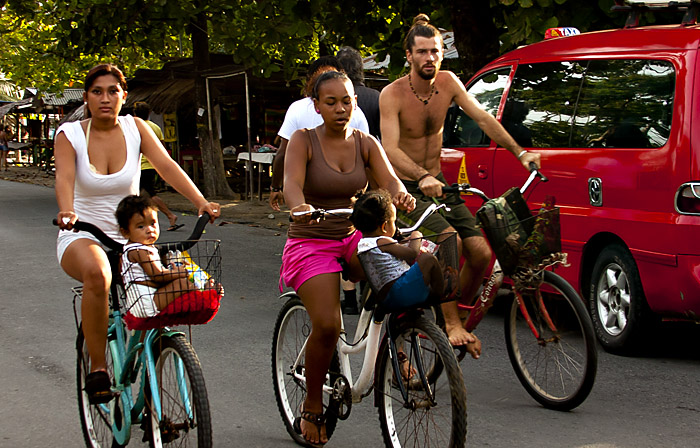 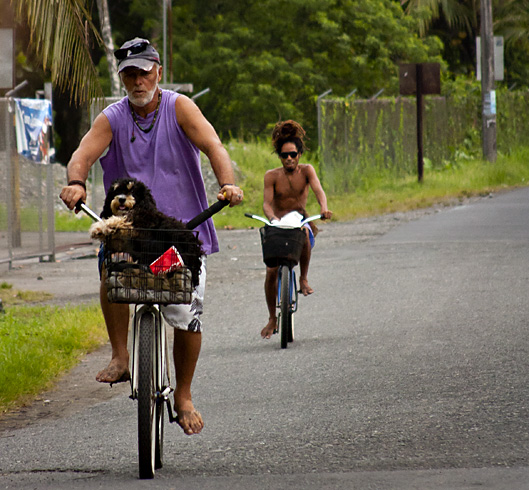 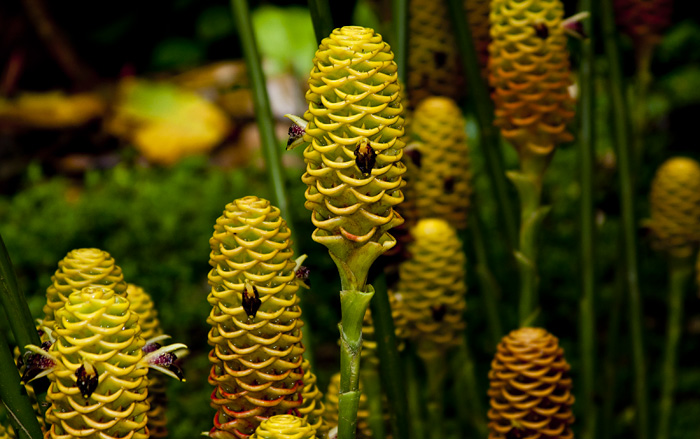 A plant. In Costa Rica, there is an enormous variety of plants and animals. A quarter of their territory consists of protected national parks. 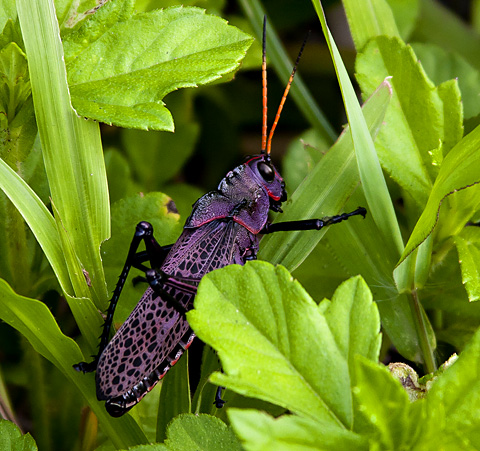 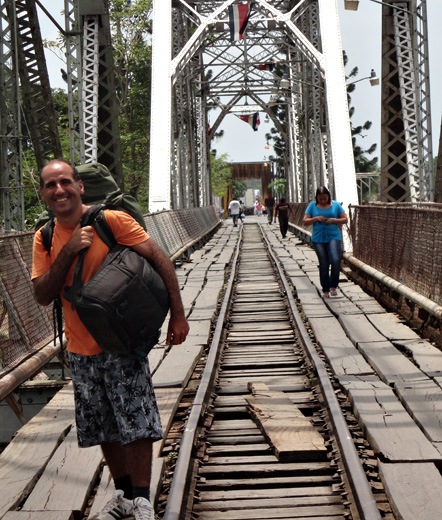 Me, at the border Panama – Costa Rica.

New map of the places I visited so far. On the coast of Brazil until the mouth of the Amazon river. On a cargo boat until Manaus, where I took a flight to Bogotà. Up in Colombia on the Caribbean coast, then down until Guayaquil in Ecuador. Again in Colombia, then Panama and Costa Rica, hopping between the Atlantic and the Pacific Ocean.

Thank you Kaliopi! I’m very happy you are enjoying my stories and photos. I hope to see you again, somewhere