Hello friends, here I am. Sorry for the delay, but I couldn’t access the internet for several days, apart from Panama City.

These two weeks were very intense, with many voyages, often by sea with speedboats. I quickly crossed Colombia and arrived in Panama on the Atlantic side, passing through a fabulous place: the archipelago of Kuna Yala (or San Blas). From there, I went on the Pacific Ocean in Santa Catalina and Coiba National Park. Now I’m back on the Atlantic in Bocas del Toro, near the border with Costa Rica.

I tell you quickly about my last few days. From Pasto, I returned to Medellin, where I stayed one day. After, I went to Turbo, a sinister place where I took a speedboat that reached the sea after a stretch of river and arrived in about 3 hours in Capurgana, a beautiful village on the border with Panama.
I would have stayed there at least a week if I didn’t find an excellent opportunity: for only $ 200 a boat tour of three days in the archipelago of Kuna Yala in Panama.
An opportunity because it was almost the same price I had to spend anyway to reach Panama (by sea or by air), without including the tour in Kuna Yala, that would have cost much more from Panama.

So, I joined the tour organized by Fabio, a Neapolitan guy that runs a posada in Capurgana, and from time to time organizes these tours (link: www.capurgana-sanblas.com).
In the tour group, apart from me and Fabio, there was a Brazilian guy, Aparicio, a French couple, and eight Israelis. On a long narrow motorboat, we reached Caledonia, an indigenous Kuna village, where we remained for three days while visiting the deserted islands around.
After, the others returned to Capurgana, while Aparicio and I stayed two more days in Caledonia. Then we went to an island at about 4 hours by speedboat, Franklin’s Island (or Tuba-Senika). There we met a Colombian couple very kind that, once we reached the Panama mainland in Cartì, offered us a ride car to Panama City… but from that I will tell you the next time.

In the village of Caledonia, besides us, there was a group of South Korean Christian missionaries completely crazy and rude, the worst kind of scum. It is even possible that they pretended to be missionaries to cover some sort of shady business.

Ok, I tell you with the photo story, but until Kuna Yala (San Blas), otherwise the post comes out too long. Very soon, I will write the second part. 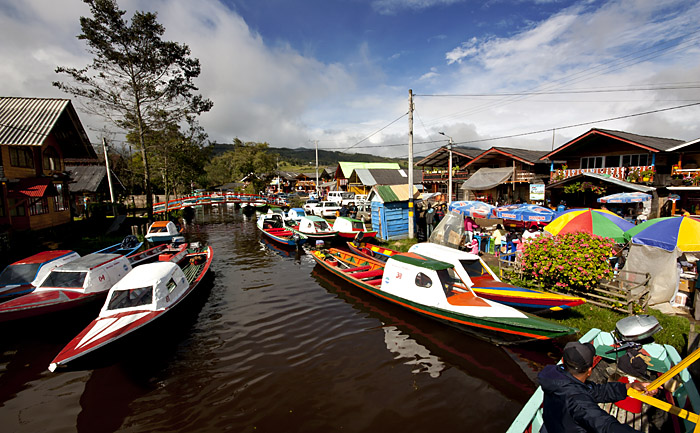 Colorful boats in a village by the lagoon de la Cocha, near Pasto in southern Colombia. 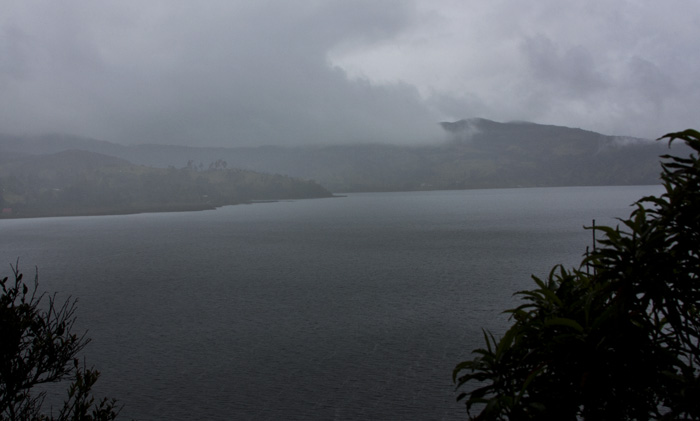 The lagoon de la Cocha, under the misty. 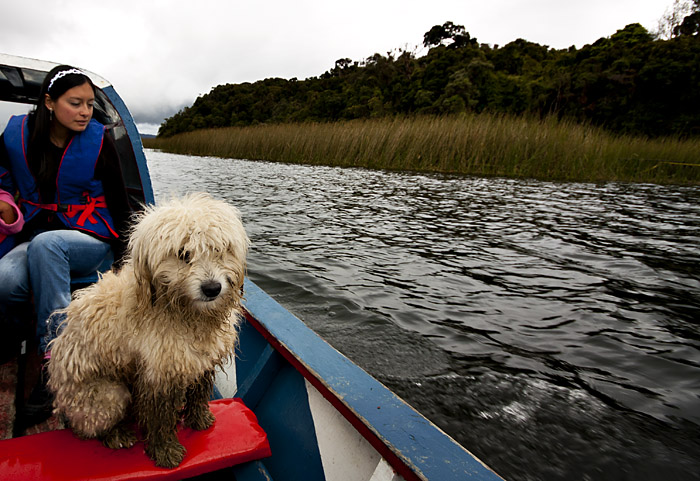 When the weather got better, I took a ride on a boat. The only problem was that filthy little dog (look at the legs) jumping continuously on me, making my jeans totally dirty. It makes to think that there are people in the world so weird to prefer dogs to cats. I’ve never seen a dirty cat in my life (apart, a little, Rasputin). In fact, cats spend most of their time cleaning themselves. 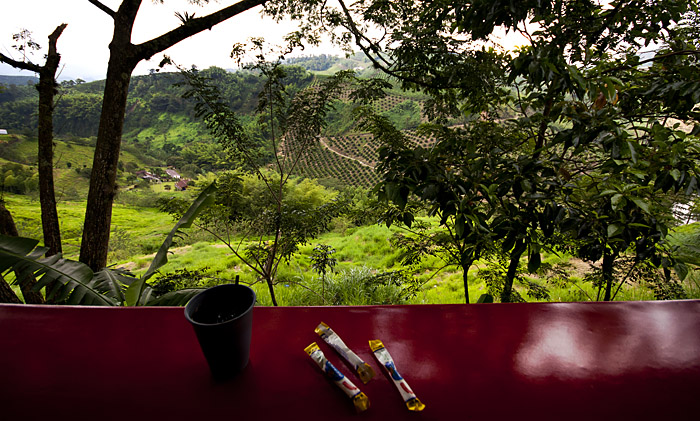 As mentioned in the previous post, I pleasantly re-passed through Colombia, from the spectacular cliff roads around Pasto to those in the charming Zona Cafetera… 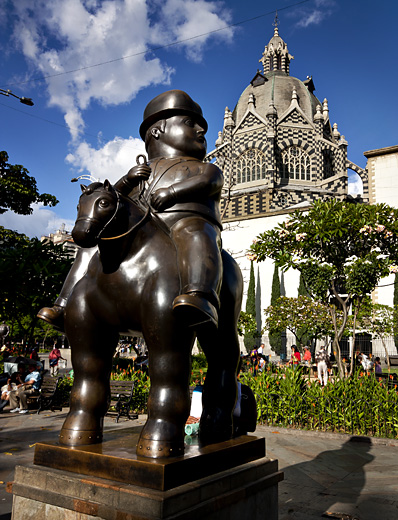 …and again in Medellin which, I repeat, it’s a pleasant city, despite its bad reputation. It is, though, still a bit ‘dangerous: in 2009, there were 2899 cases of violent death. However, the district where I stayed both times, El Poblado, is tranquil.
This is Botero park. Botero was born in Medellin. 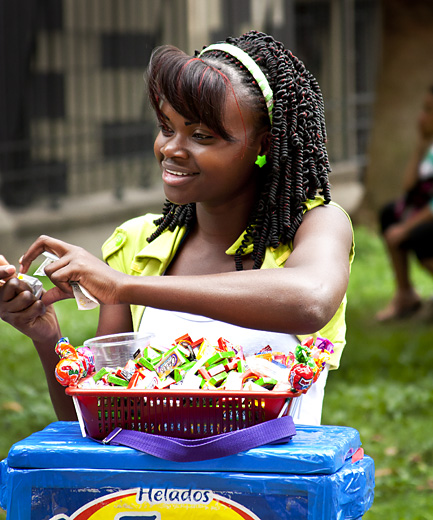 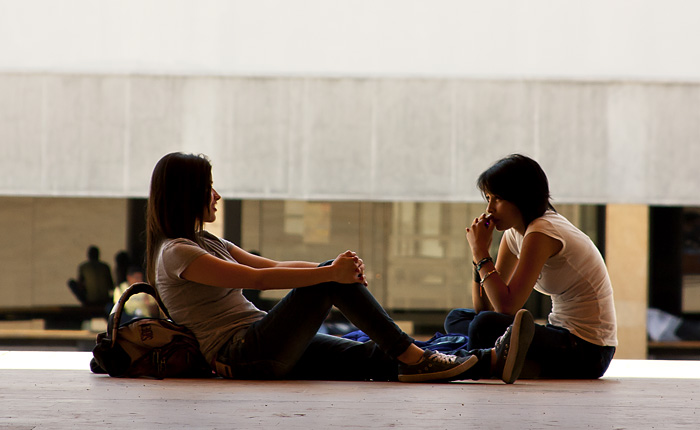 Girls in the university district. 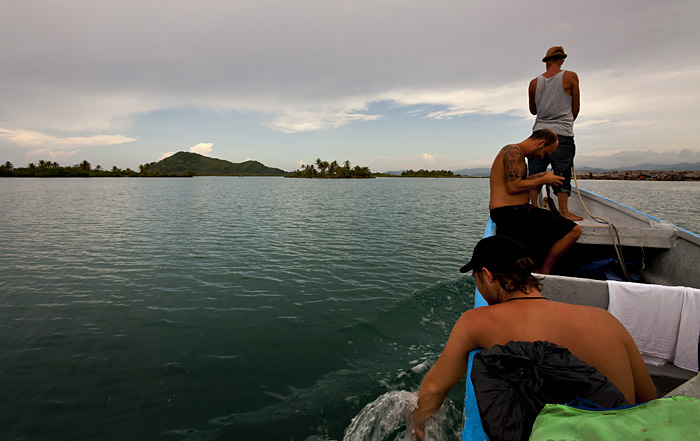 Finally, I reached Capurgana, on the northern border with Panama, on the Atlantic side. As I said, I reluctantly left it after only one day to join the boat tour with Fabio in the archipelago of San Blas or Kuna Yala, in Panama.
Behind Fabio (ahead), Aparicio, the Brazilian guy I am traveling with now, and an Israeli guy. 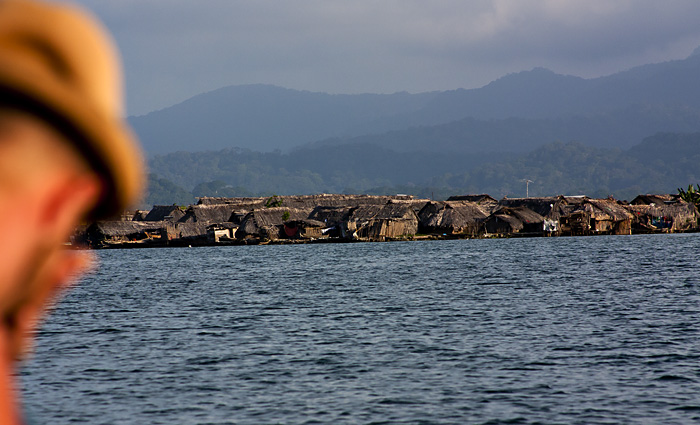 Reaching Caledonia, a kuna village with about 1000 inhabitants, where I stayed 5 days. The islands of the archipelago of San Blas are property of the Kuna people.

The Kuna (also spelled Guna) is an indigenous group of about 70,000 people who live in the archipelago for centuries with very little interference from the Panamanian government. They prefer to inhabit only a few of the nearly 400 islands belonging to them, leaving the others uninhabited.
It was the first group in Latin America to achieve such independence. However, it seems to me (but I could be wrong) that, right now, they are doing the reverse path to most of the other indigenous groups in Latin America. If these, which seemed on the verge of disappearing, are rising back from their ashes in these last two decades, claiming their origins, cultures, and languages, the Kuna, after having for centuries preserved their customs, are in recent years dangerously losing them.
A big challenge for them is resisting the pressures from the multinationals of the tourism industry that offer astronomical sums for having the permission to build holiday resorts on their islands. 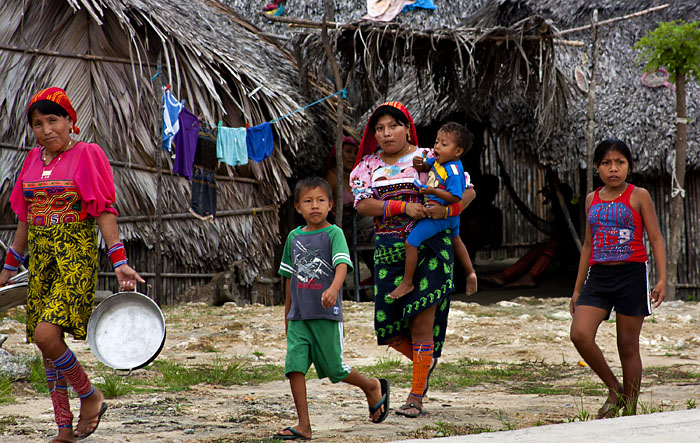 Kuna people watching us between suspicion and disgust in their village 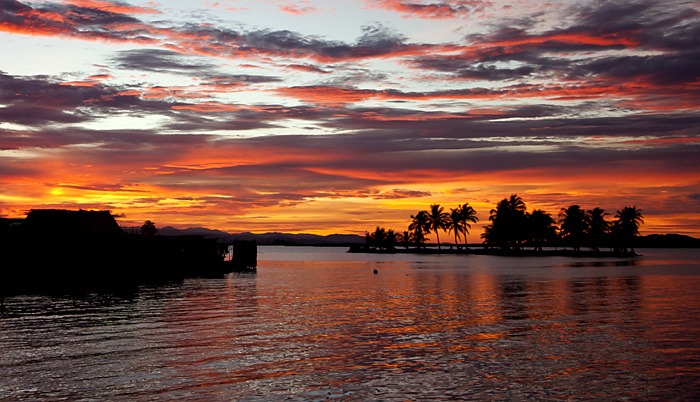 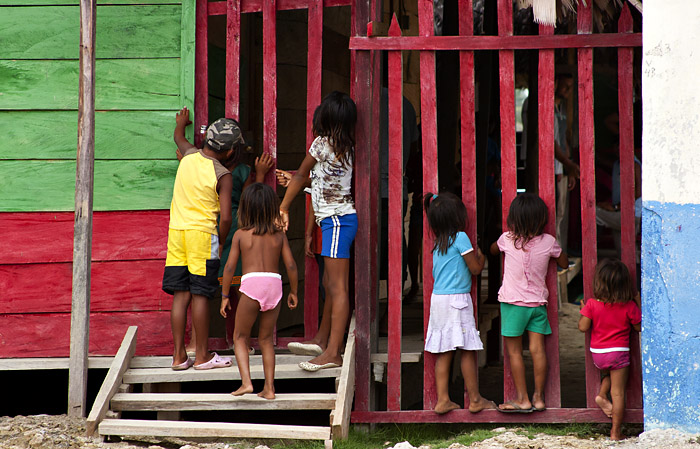 Children locked out in their own village by the South Koreans. In fact, they used to close with a padlock the passage leading to the pier near their rooms because they didn’t want around children and other visitors. Aparicio and I, that the last two days had our backpacks there, sometimes had to use a canoe from another dock to take our stuff!
South Koreans treated the children in a disgusting way. However, at a specific hour, they transformed from Mr.Hyde to Dr.Jekyll. Maybe, in their schedule at that hour, there was: “play with children”. So, they moved to the central square with balloons and strings to play with the kids. They were unwatchable, with a constant hypocritical smile on their face. Even a non-violent pacifist like me felt a desire to punch their faces. 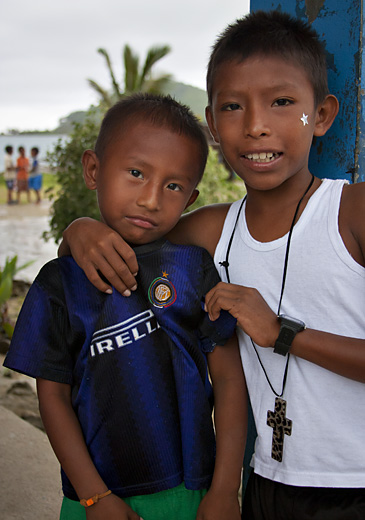 I could witness firsthand the tragic influences of the neo-colonization. One evening, the South Koreans assembled a canvas, like a cinema. I thought they wanted to show a movie, but no… it was for karaoke! Luckily, after, the same indigenous people said that it was crap.
Another time, the missionaries distributed crosses (as to the guy on the right). The kids loved this gift and after were repeating excited “Christians!”, “Christians!”. So I told them nooo… Christianity is a religion for losers! You have to become Buddhists! They liked the name, so they started repeating amused “Buddhism,” “Buddhism”. So, it’s a really globalized world, with South Koreans who convert people into Christians and Italians that re-convert the same people into Buddhists a moment later…
But nothing can describe my deep discomfort when I saw that kid on the left converted into an Inter football team fan! We need to do something! 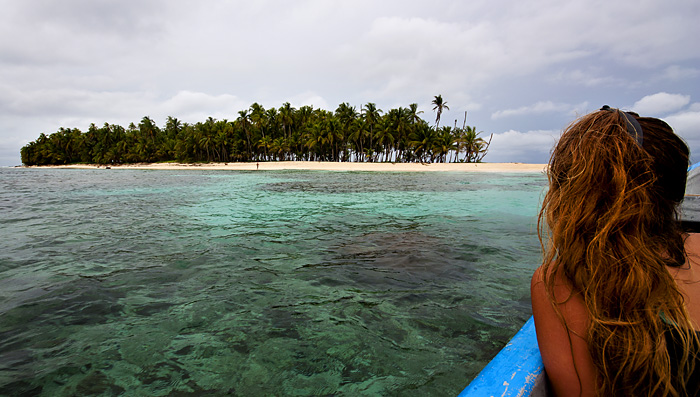 Another example of the harmful influence of contact with the neoliberal civilizations: until 1990, so 12 years ago, the currency used by Kuna people was … the coconut! Yes! And, of course, they were happy: no tricks from shady banks that “create” money, no inflation, and every year it was reproduced naturally.
But now they only think of dollars. So, one evening a kuna man told us that their primary task now is to look for loads of drugs that traffickers threw overboard when they are intercepted, by land or by sea, by the police. In fact, that is now the main route used by cocaine traffickers from Colombia to the United States.
A few months earlier, they found a load that after, through some contacts, they sold to the same traffickers for $ 50.000, divided by the whole village.
All the sea around there has therefore become a sort of mega slot machine. Jackpot: it’s said that once a village nearby found a load of cocaine that paid one million dollars!

By coincidence, right the day after hearing this story, as we were going to that delightful desert island, we saw from afar a large container, like a thermos, floating. At that moment, I really thought I had finally solved all my life problems. And everybody on the boat was feeling the same. But the euphoria was short-lived because it was just a floating buoy used by a scuba diver. Even on the way back, we saw something similar. We were all a bit skeptical this time, but the Colombian driver, Marcellino, still wanted to go to check. It was a broken bucket floating upside down. Never a joy. 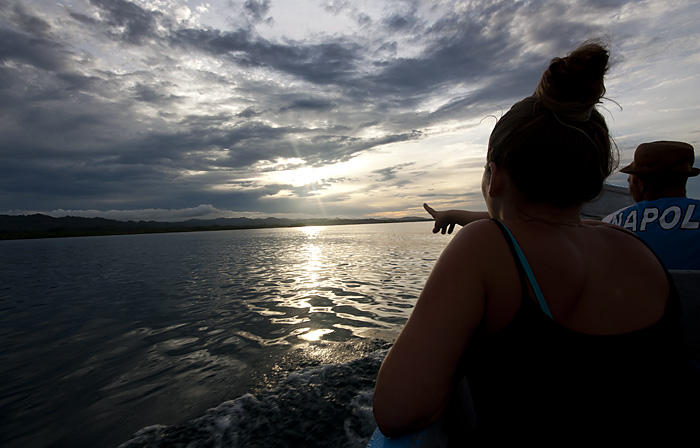 From time to time, we saw dolphins, manta, fish jumping, flying fish. At one point I saw one very big near the boat, I don’t know which one was. And many when snorkeling. 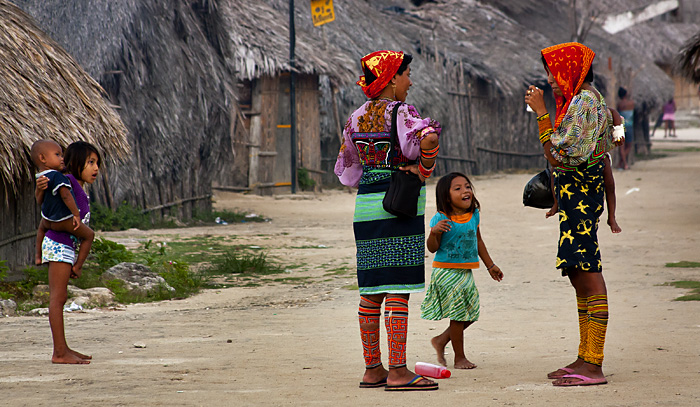 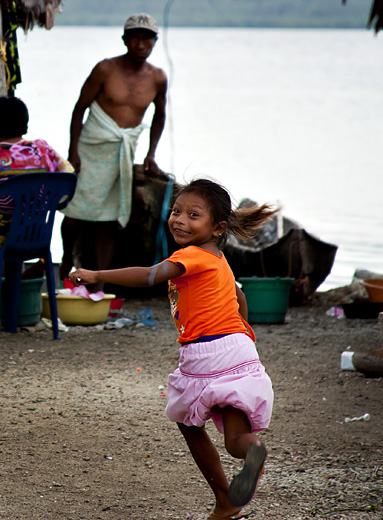 Little girl runs away because she doesn’t want to be photographed. 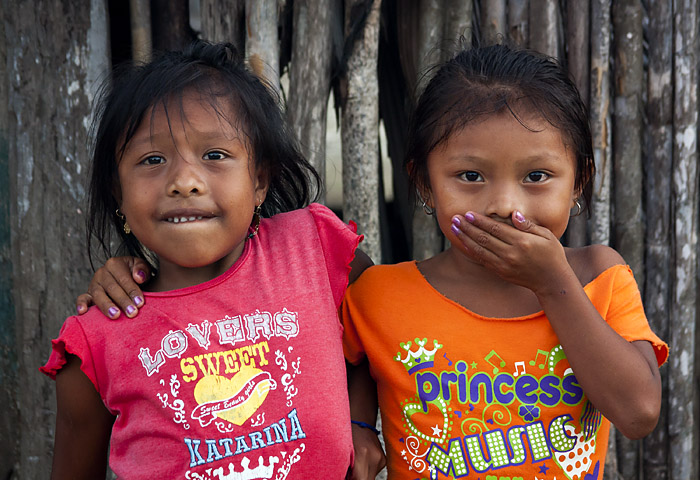 After, she changed her mind. 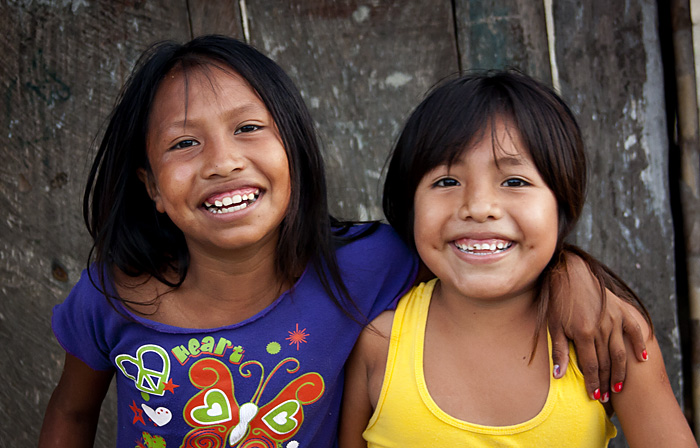 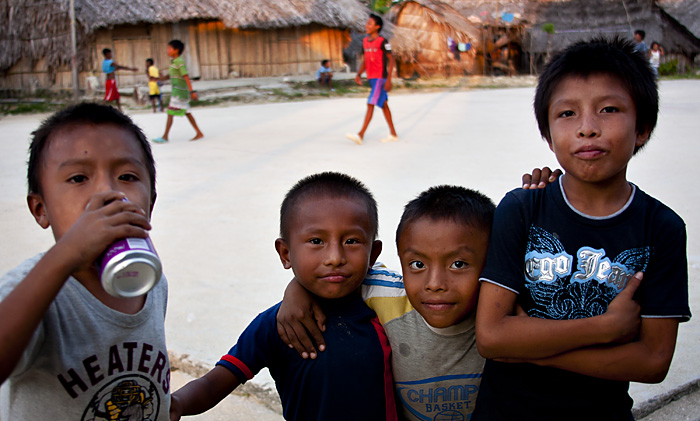 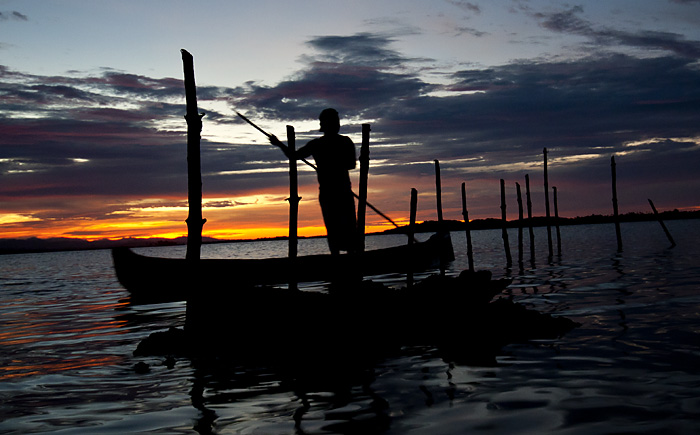 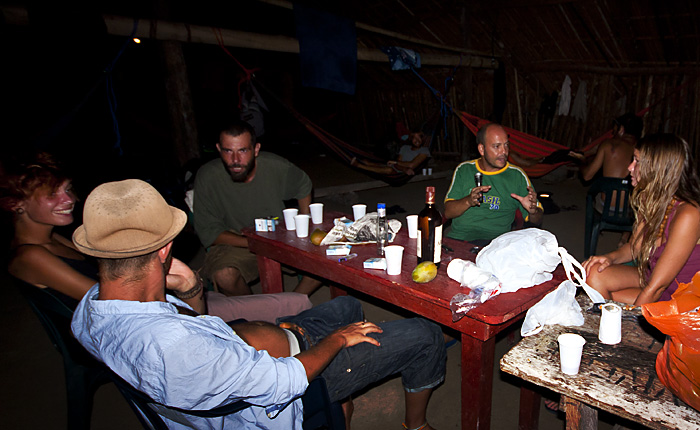 Drinking rum in the shed where we slept in hammocks. From the left, Fabio, Mary, Daniel, Aparicio and Ory. 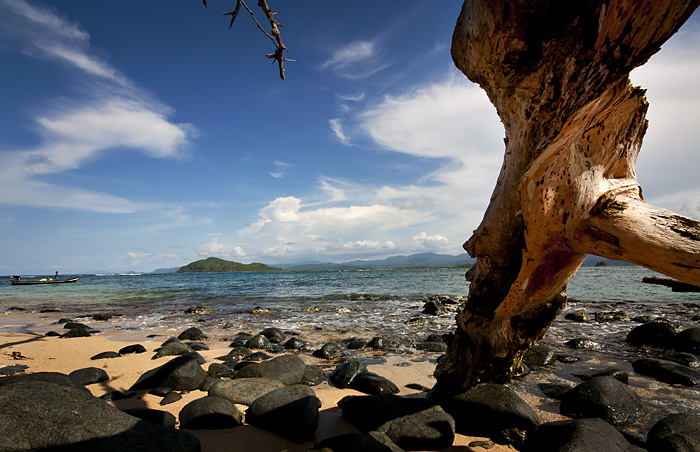 A trunk on the beach. 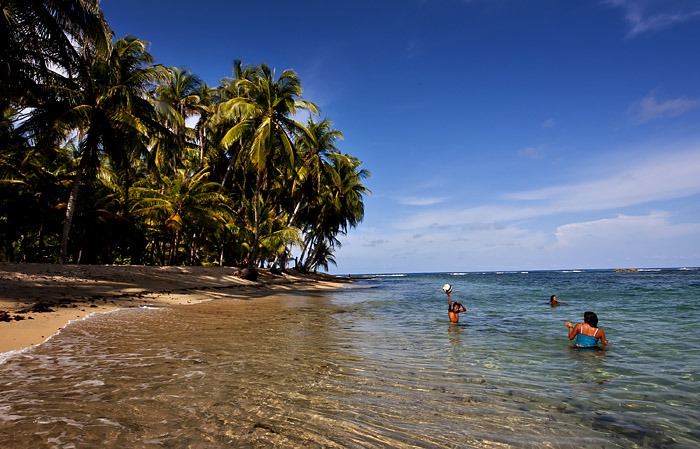 There are other interesting photos of Kuna Yala, but that’s enough for now. Maybe, next time, I will add more, along with those of Santa Catalina, Coiba, Bocas del Toros, and Costa Rica, where I should arrive in 3 days. Unless I don’t move back permanently to a San Blas island to become an anarchist missionary.