Hello frieeeeends!! I’m finally back after two years. No, Covid didn’t take your favorite blogger away, but every time I started planning a trip I found myself overwhelmed by so many restrictions and bureaucratic mess that I always gave up until now.
And maybe you are right in saying that the pandemic will be remembered by posterity especially for having stopped, temporarily, Dekaro Diario! Ok, this is a little moment of self-exaltation, perhaps due to the joy of writing after so long.
So, let’s stop nonsense. I’ll tell you about this short trip, a little less than two weeks, to Albania, North Macedonia, and Kosovo

Map of the visited places:

Me and Riccardo, now a regular guest of Dekaro Diario, arrived in Durres by ferry from Bari. We rented a car and went down to Butrint. From there we went up towards Lake Orhid and entered North Macedonia. Then up to Pristina in Kosovo and from there back to the south, returning in Albania until Tirana. 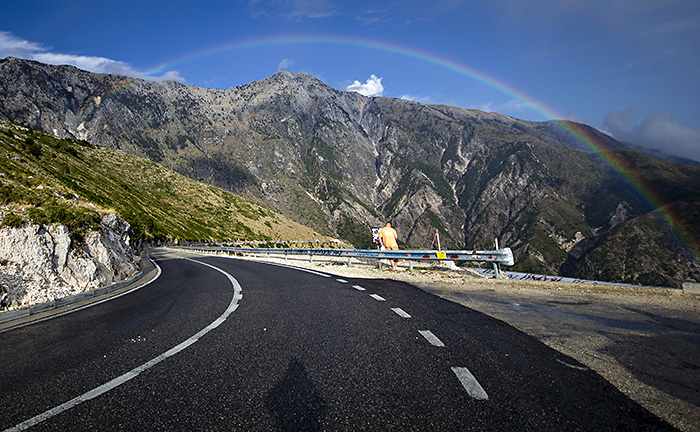 On the road again! The rainbow greets us for this new journey.

Albania has made extraordinary progress since the collapse of the isolationist communist dictatorship, in 1991, and year after year it is opening more to tourism, thanks also to new infrastructures, especially the roads.
Today it is a country with great energy and a very hospitable young population with great optimism towards the future. But, of course, not all that glitters is gold. Systematic corruption, unemployment, severe inequalities, organized crime, financial mafia, and all the other disasters that accompany capitalist liberalism are the new challenges that the country now faces. 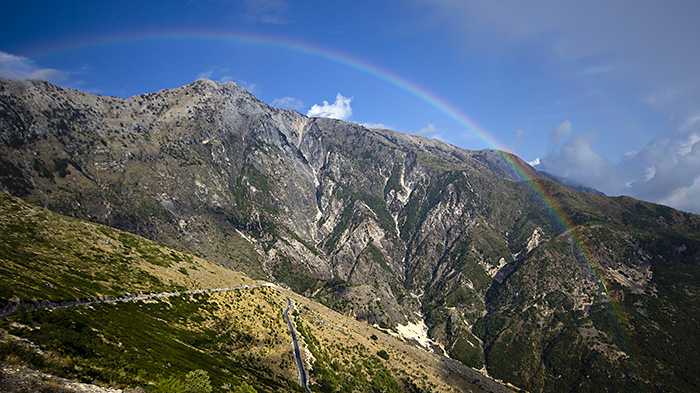 Rainbow over the mountains. 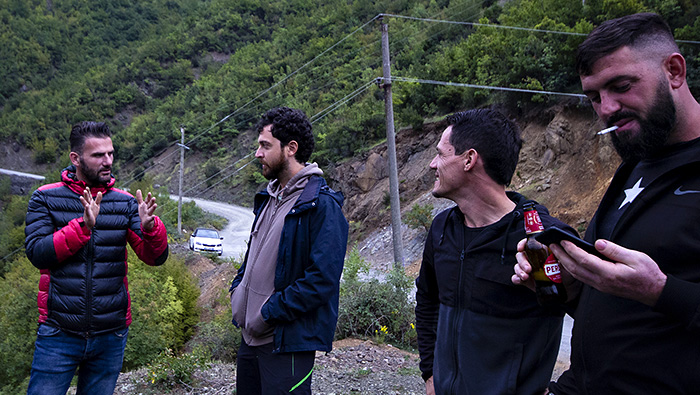 Riccardo and some Albanian guys.

Berat, the first city visited. It was founded in the 6th century BC. by the Illyrians, from whom the Albanians descend. It is nicknamed the “city of a thousand windows” because of these white Ottoman houses that climb the hill towards the castle. 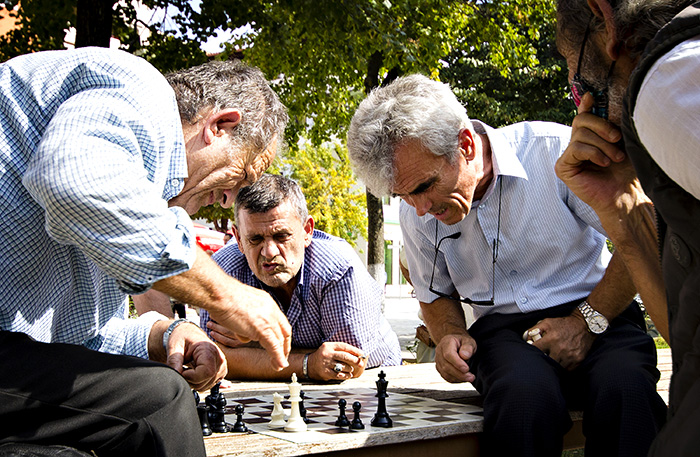 Tension and concentration in this chess endgame in a Berat’s park. 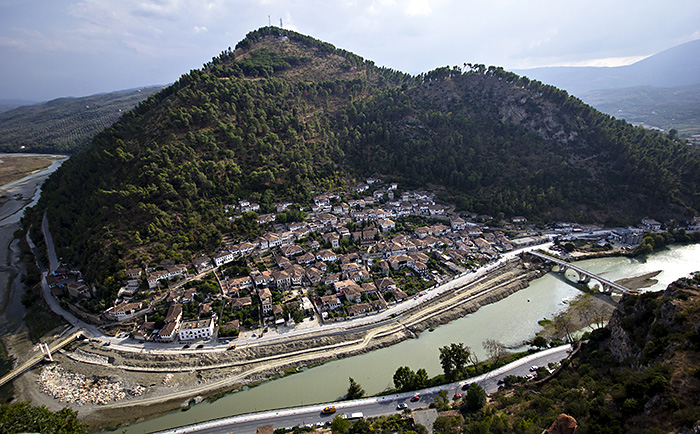 Across the Osum River is Gorica, the Catholic neighborhood of Berat. 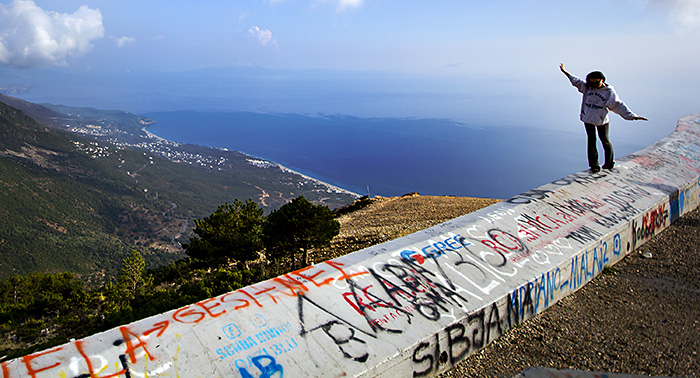 The coastline, going south. During that journey, we also visited the ruins of Apollonia, an ancient city of Illyria and later an important Roman city, and Valona, a large tourist city. 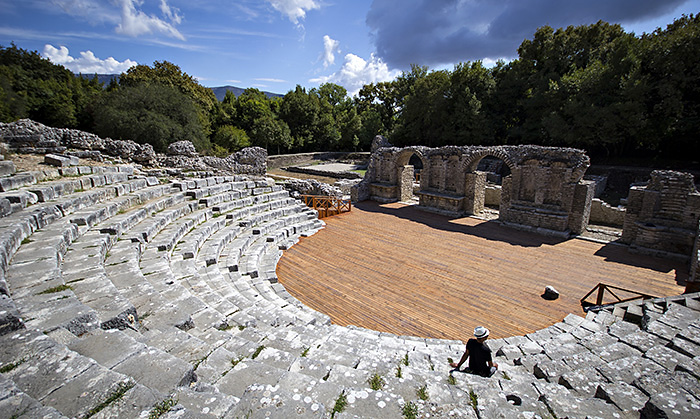 To the far south are the splendid ruins of Butrint, a Greek and later Roman city located on a peninsula. 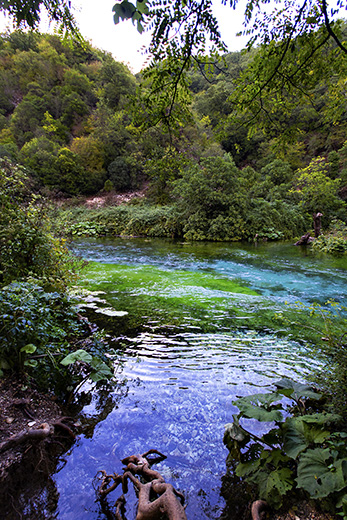 The crystalline waters, blue and green, of “Blue Eye”, formed from a spring that flows from under the river. The colors remind me the painting ‘Ophelia’. 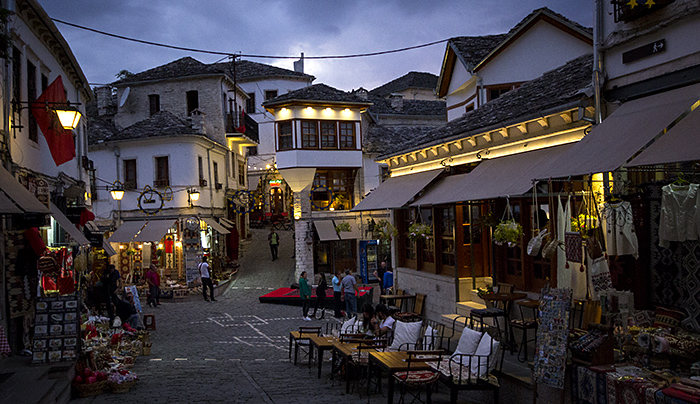 Ottoman-style houses in the center of Gjirokastra. 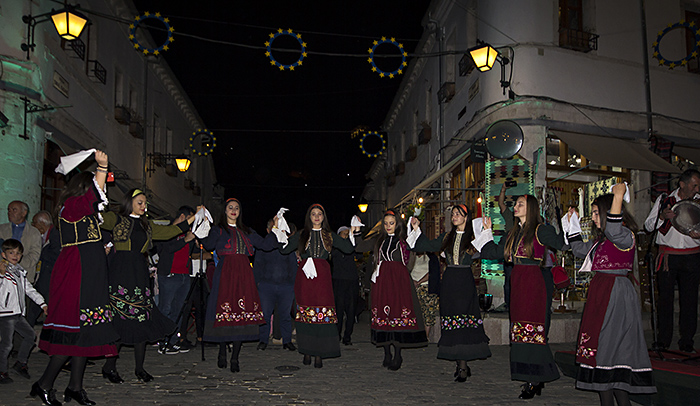 Traditional dance in the streets of Gjirokastra. 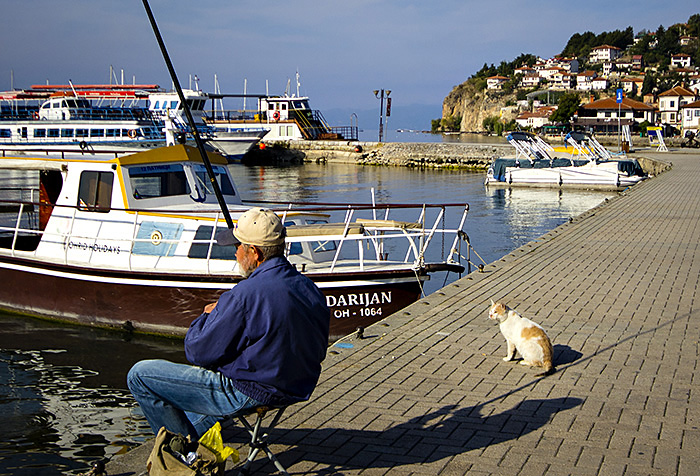 Cat waiting hopefully on the pier in Ohrid, a charming Macedonian town on the same name Lake Ohrid.
North Macedonia (please remember to specify ‘North’ otherwise the Greeks get very upset) was formed as a province within Yugoslavia after the First World War. During the breakup of Yugoslavia, it was the only country to have achieved independence without suffering even a day of the war.
Macedonia as a historical region includes also part of Greece (which, as I said, is very touchy about it), Bulgaria, and small parts of Albania, Kosovo, and Serbia. 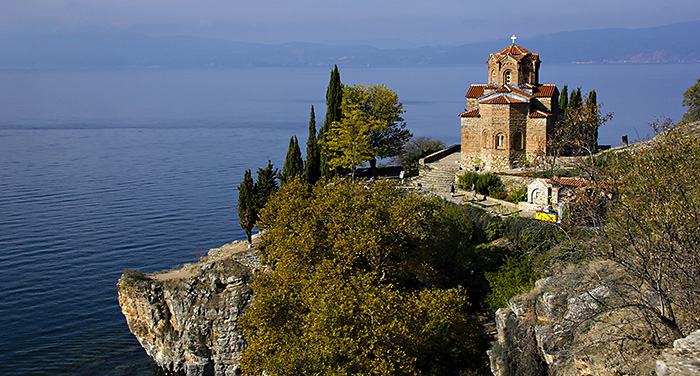 One of the most photogenic places on the trip: the Orthodox Church of Saint John at Kaneo overlooking Lake Ohrid. 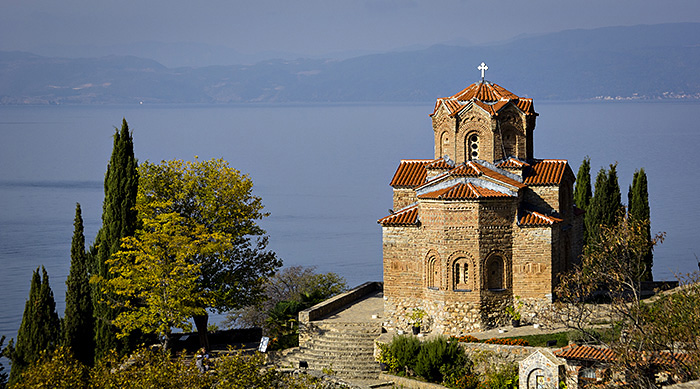 It was built in the 13th century. 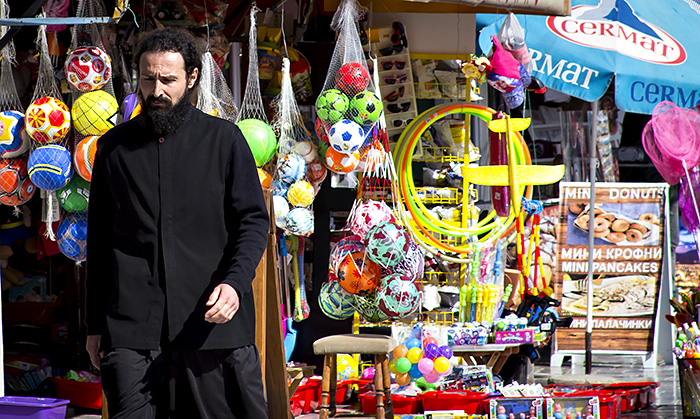 Orthodox monk walks thoughtfully in a world of futility. 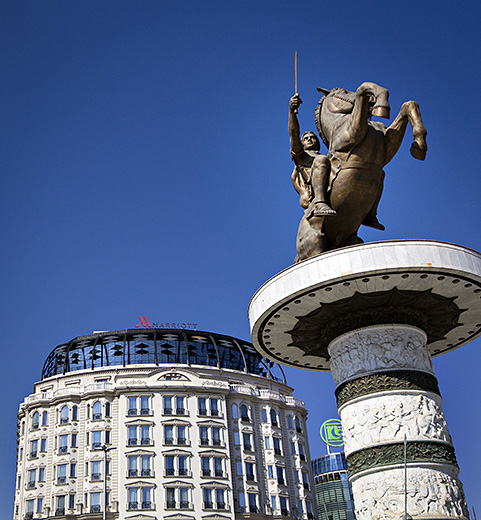 “Warrior on a Horse” statue in the main Skopje square.
But is it not by any chance Alexander the Great!? Don’t say it!!… you would unleash the fury of the Greeks who have imposed this statue to be called “Warrior on a horse”, without mentioning him. They look like kindergarten children, it’s mine… no it’s mine…
Even the name “North Macedonia” instead of simply Macedonia has been imposed by Greece after an international campaign of political and economic boycott carried out with surprising stubbornness.

About the statue, a free tour guide told us that it cost a disproportionate amount, around 10 million euros and that there is a real mania to build statues everywhere in Skopje, probably, apart from chauvinism, a way to steal public funds.
The new buildings in the center of Skopje are mostly white, with colonnades and statues around, usually quite kitsch. A trend that I had already noticed in the new buildings of the capitals of the Central Asia countries, even if to less extent. 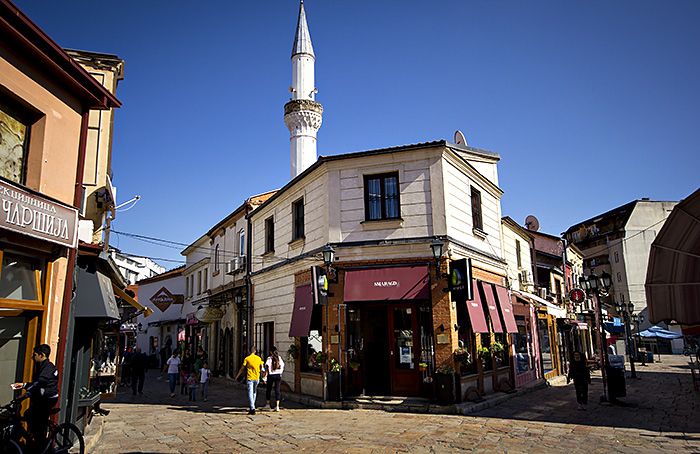 The most beautiful area of Skopje is the old bazaar, one of the few areas to have survived the terrible earthquake of 1963 which destroyed almost completely the city. 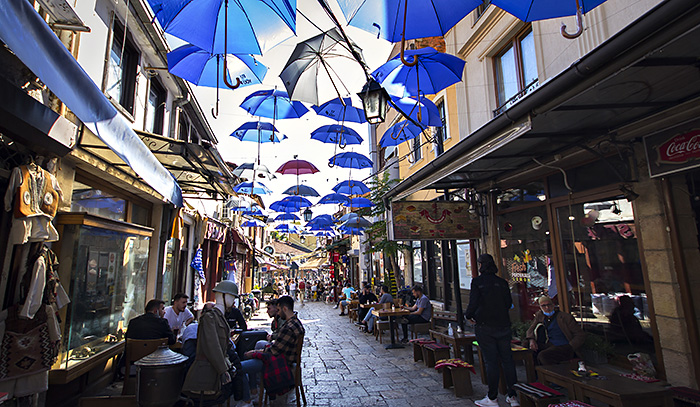 A street of the bazaar.

The “Newborn” monument in Pristina, the capital of Kosovo. This monument was inaugurated on the day of Kosovo’s self-proclamation of independence, February 17, 2008. Still today, many countries don’t recognize the Republic of Kosovo, beginning with Serbia which considers it as its own province.
It has a very young population and there is optimism for the future but even here, perhaps even more than in Albania, all that glitters is certainly not gold. Suffice it to say that last year the president Hashim Thaci, one of the main political figures of the last twenty years, had to resign on the obvious accusations of war crimes, international drug trafficking, torture, killings on commission, and even organ trafficking of Serbian prisoners. So, you can imagine where are flowing the international investments into this land which is, in the end, one of the last conquests of the Western countries’ wars.
Pristina is a very modern city, full of cafes, shops, and clubs, even if seems one of those places made with the mould of globalization, with the exact same chains of shops and restaurants. 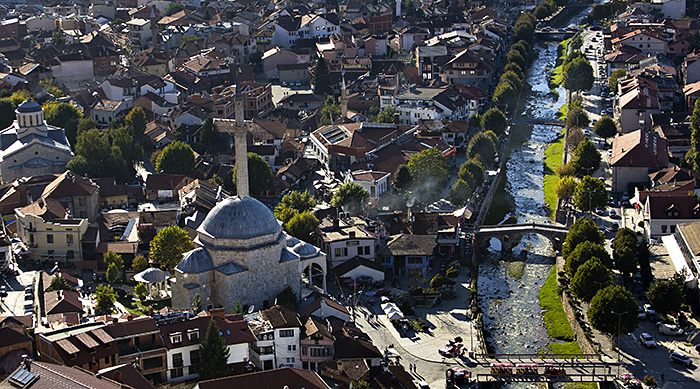 Prizren, the second largest city of Kosovo and historical capital. On the left you can see the Sinan Pasha Mosque, on the right the Old bridge.
Its demographic composition, with continuous repopulation and escapes between the Albanian and Serbian ethnic groups, reflects the troubled history of the centuries-old tensions between these populations in Kosovo, with continuous atrocities and attempts at ethnic cleansing from both sides. A shameful campaign of ethnic cleansing by the Serbs was one of the main causes of the outbreak of the Kosovo war in 1998. During the war almost all Albanians were forced to flee this city. After the war, it was the Serbs who suffered violence and reprisals and were forced to flee. At the moment only about twenty Serbs live in Prizren and only 5% of the population of the whole of Kosovo is Serbian, the rest almost all Albanian. 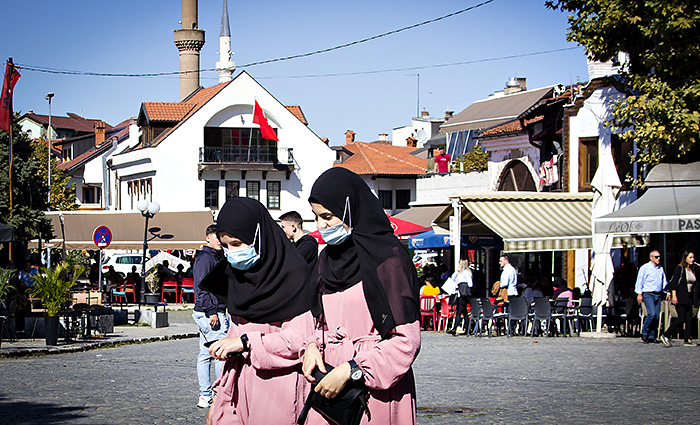 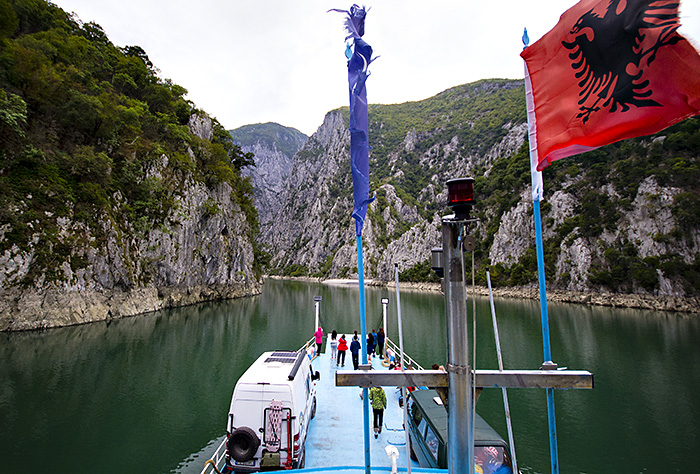 Back in Albania, we took a journey of about 3 hours on a ferry from Fierze to Koman (in the map above it’s the stretch between points ‘A’ and ‘B’). It’s a spectacular route inside a dam surrounded by overhanging rocks.
Unfortunately, the sky that day was cloudy and did not enhance the colors. 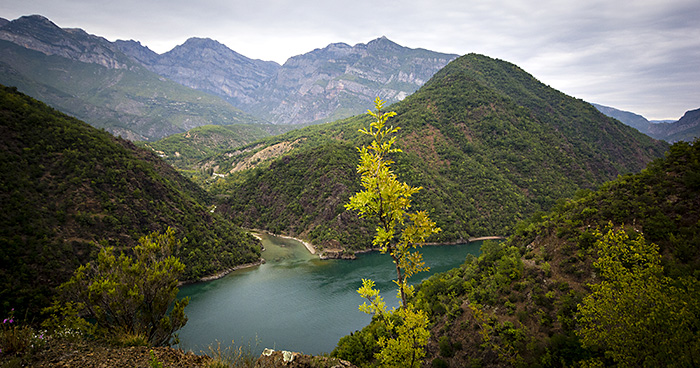 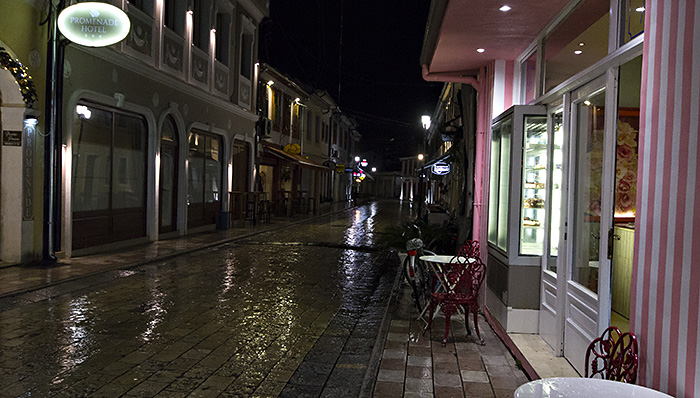 An elegant street in Shkoder. It had several dominations. The Venetian one probably influenced the style of some parts of the city. 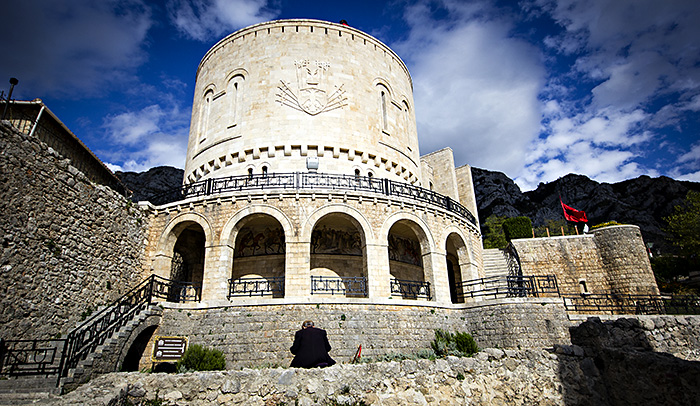 Museum built inside the Kruje castle in honour of Skanderbeg, who from here defended Albania from countless invasions by the Ottomans. Only after his death from malaria, the Ottomans managed to conquer Albania in 1478, remaining until independence in 1912.
He is considered one of the greatest commanders in history and his statues are ubiquitous in Albania and Kosovo. 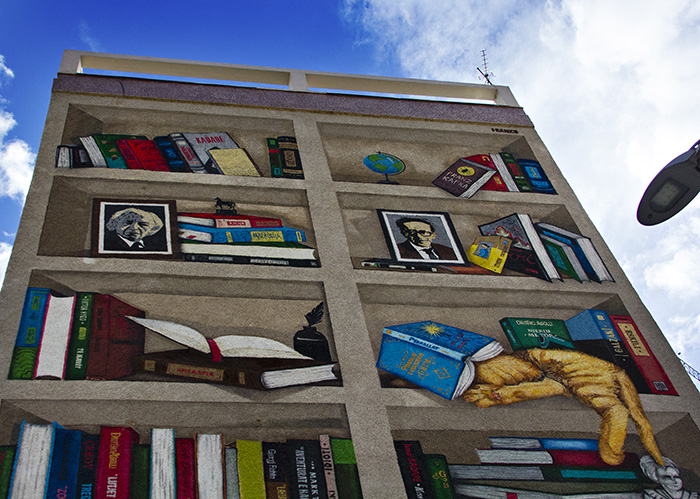 A building in the center of Tirana. The whole downtown area is full of lively clubs, cafes, bars, and restaurants. A very pleasant place. 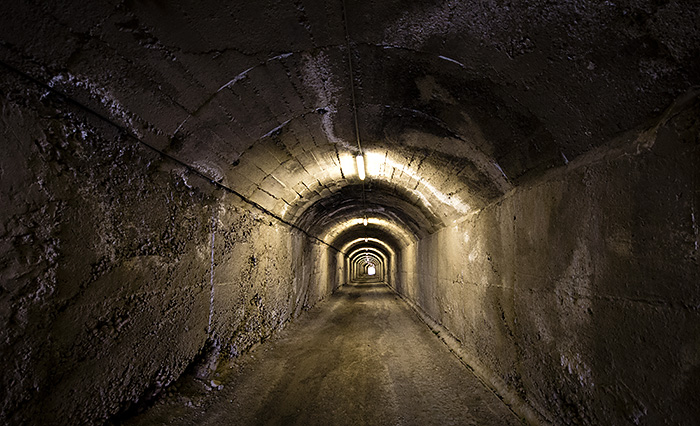 The disquieting tunnel that leads to Bunk’art, a formerly secret underground bunker, built in the seventies and now converted into a place for art exhibitions and a museum of the recent history of Albania, with particular attention to the abuses of the dictatorship. Some rooms, as for example those reserved for important politicians of the time, have been left as they were.
At the end of this tunnel, there is a hill under which was dug the several floors bunker.
The dictator Enver Hoxha had developed a kind of paranoia and believed that the invasion of Albania was imminent. Bunkers are scattered throughout Albania, most of them very small, which can still be seen today.

I made a video that makes better understood the place, also because part of the atmosphere is created by the music and sounds inside the rooms. 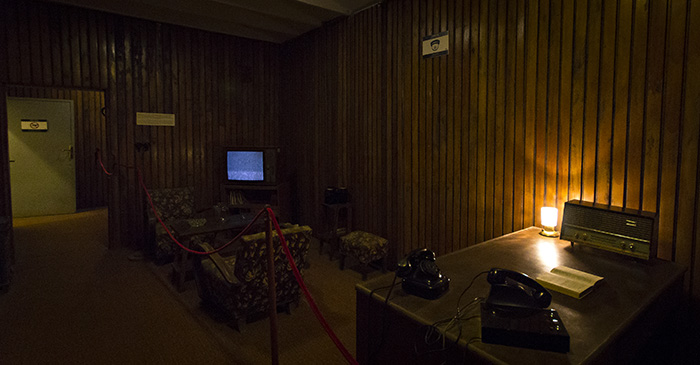 This was the room reserved for Prime Minister Mehmet Shehu. 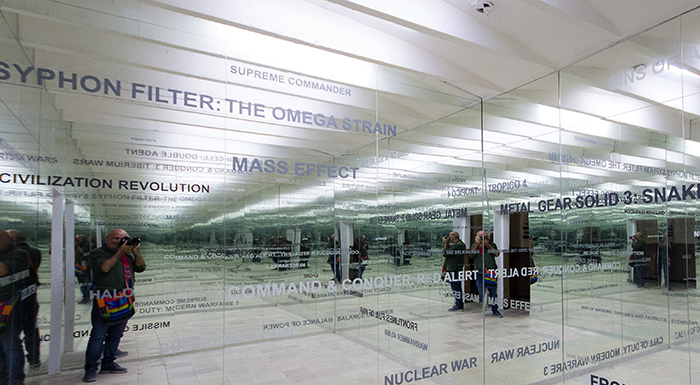 Well, it was a great pleasure to meet you again, and let’s hope we don’t need to wait two more years now! Actually, I reveal you that I’m already planning a short trip very soon… as fast as possible, before the arrival of the next variant! I’ll let you know soon!