Hello friends! This time a small trip to Slovenia and northern Croatia, especially around Istria. 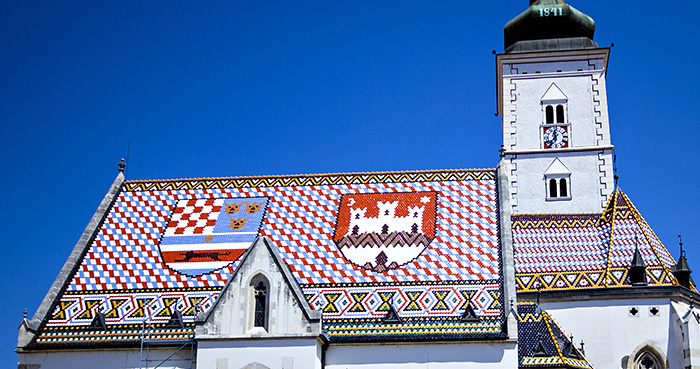 First stop Zagreb, the capital of Croatia.
The tiled roof of St. Mark’s Church with the coats of arms of Zagreb and the former kingdom of Croatia-Dalmatia-Slavonia.
Like many buildings in Zagreb, it’s still uninhabitable after the 2020 earthquake. 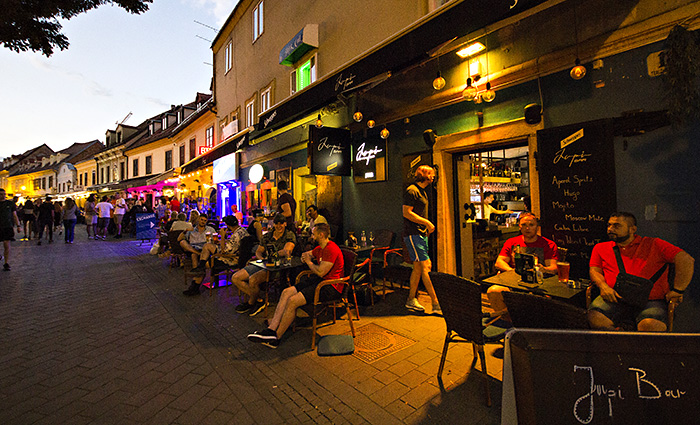 In the center of Zagreb there is a lively nightlife. 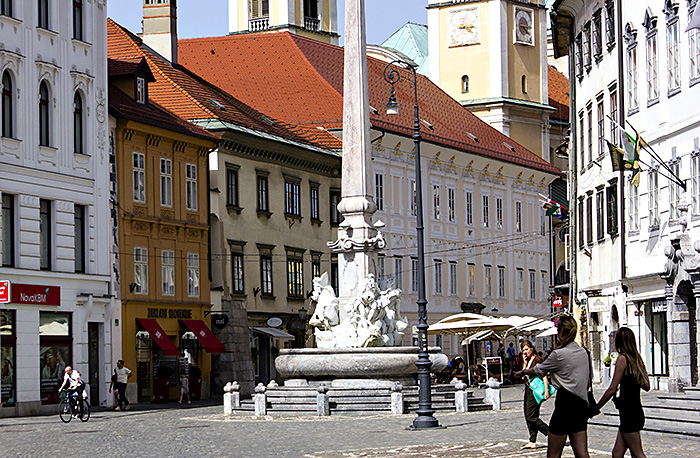 Ljubljana, the quiet and relaxing capital of Slovenia. 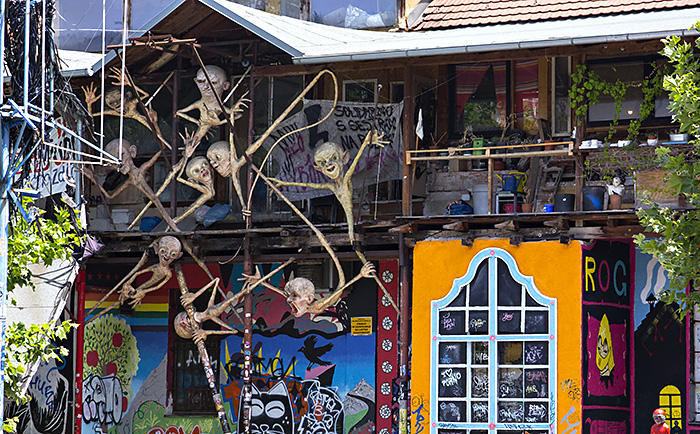 The most interesting place to go in the evening is, definitely, Metelkova City Autonomous Cultural Center, a squat created inside former barracks. It’s the main meeting point for Slovenian alternative artists. They have embellished it with graffiti and works of art.
Where there is Anarchy, there is Beauty. 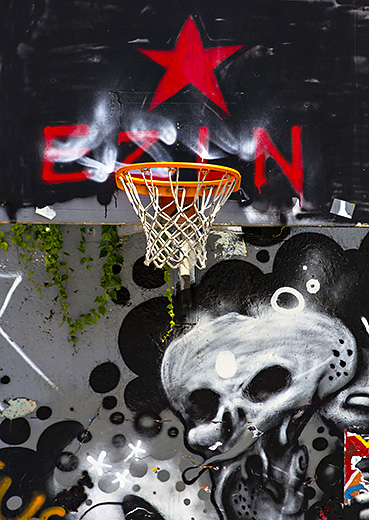 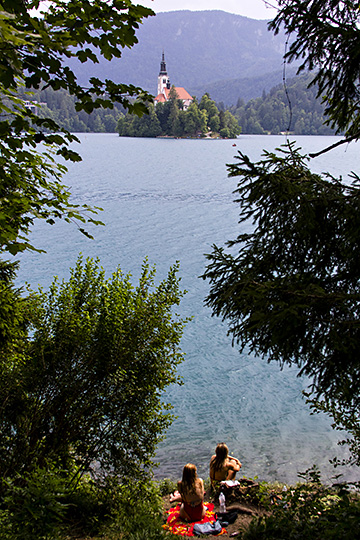 Lake Bled, surrounded by green hills and a castle, is one of the most pleasant places in Slovenia. In the middle there is an islet with a church. 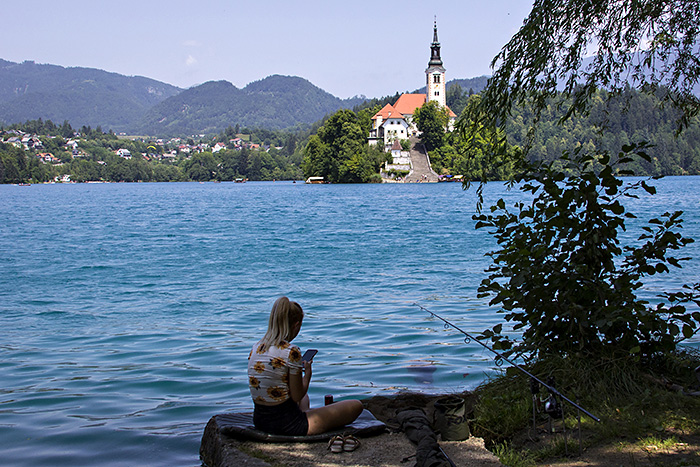 Fisherwoman by Lake Bled. In the background, the church on the islet. 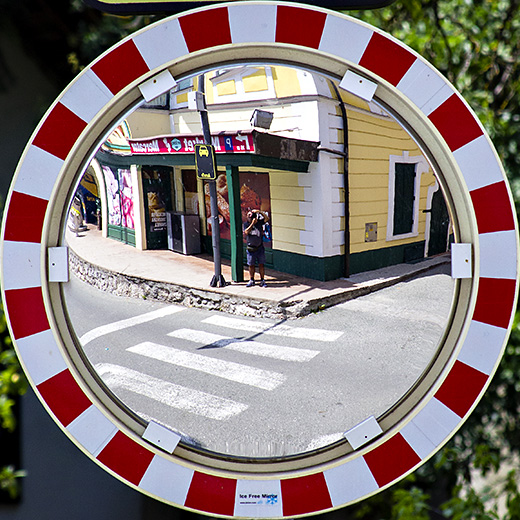 - Magic mirror on the crossroads, who’s the fairest one of all?
- For sure not you, Dekaro.
- Fuck off. 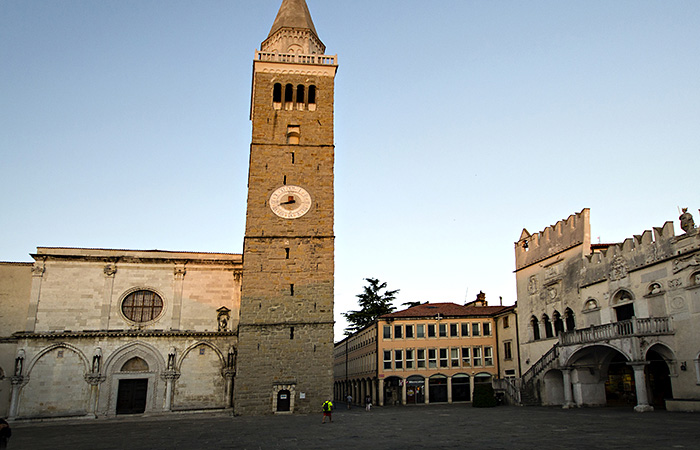 The central square of Koper. From here I begin to travel in Istria, going south.
In general, Istria has plenty of towns with Venetian architecture, overlooking the sea. Sometimes you can see also Roman ruins and Austro-Hungarian buildings.
A pleasant surprise is that they understand Italian more than English. As for me, I learned only one word of the abstruse Slavic languages: “pivo”. And that’s enough for me. 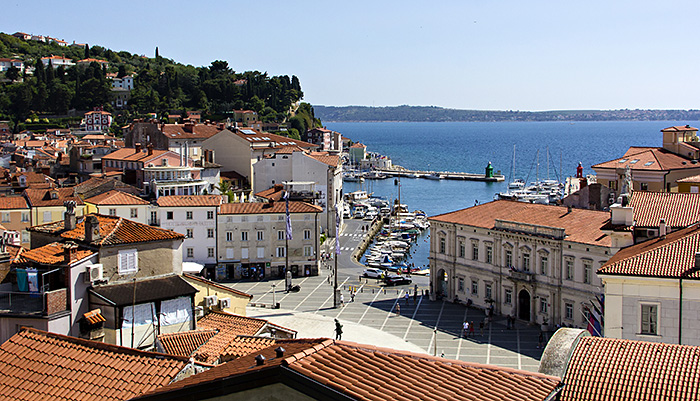 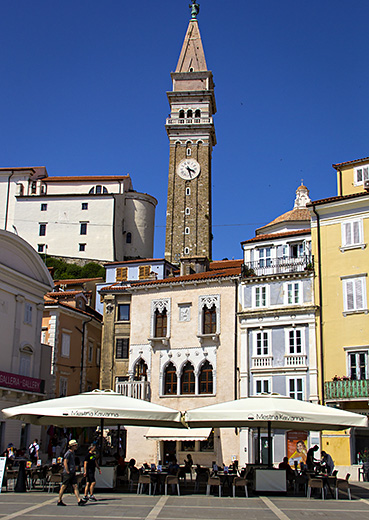 Venetian architecture in the central square of Piran. 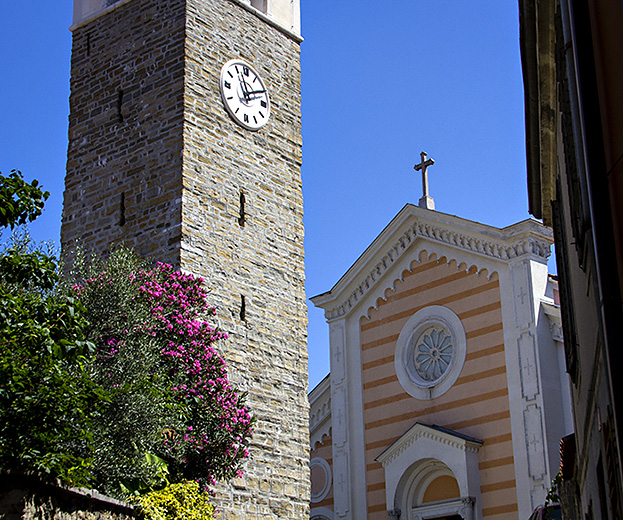 Church and bell tower in Izola. Like Koper, it was an island until a couple of centuries ago. 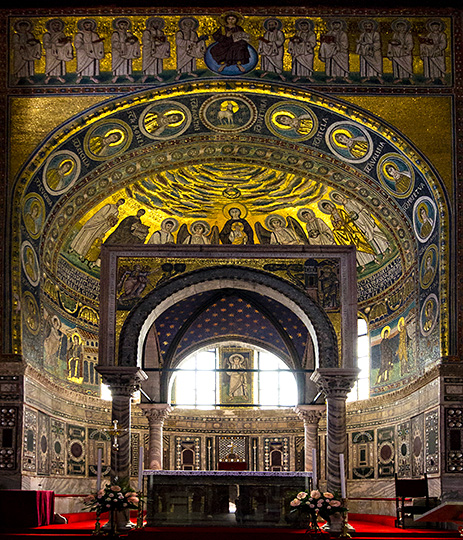 Again in Croatia, in Poreč.
A stunning Byzantine mosaic in the Euphrasian Basilica, founded as early as the 4th century. 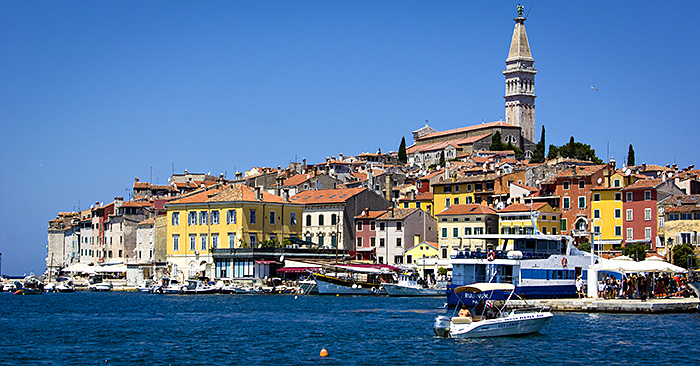 Rovinj, one of the most beautiful cities in Istria. 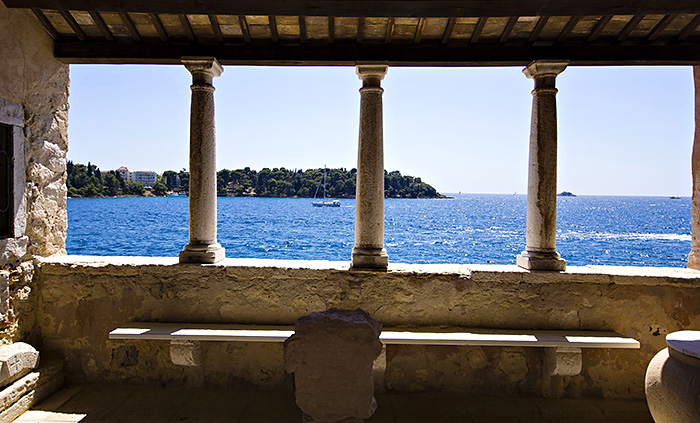 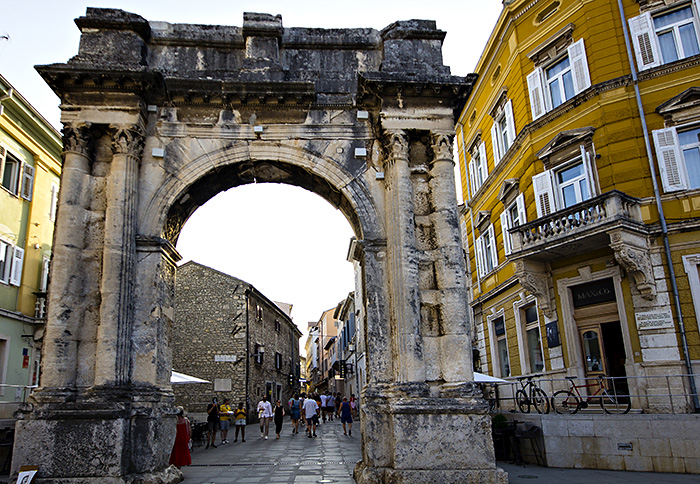 Roman triumphal arch, at the entrance to the old town of Pula. 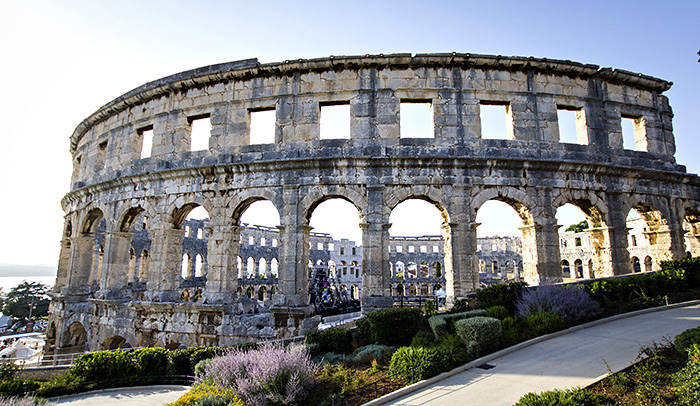 The Roman amphitheater of Pula. 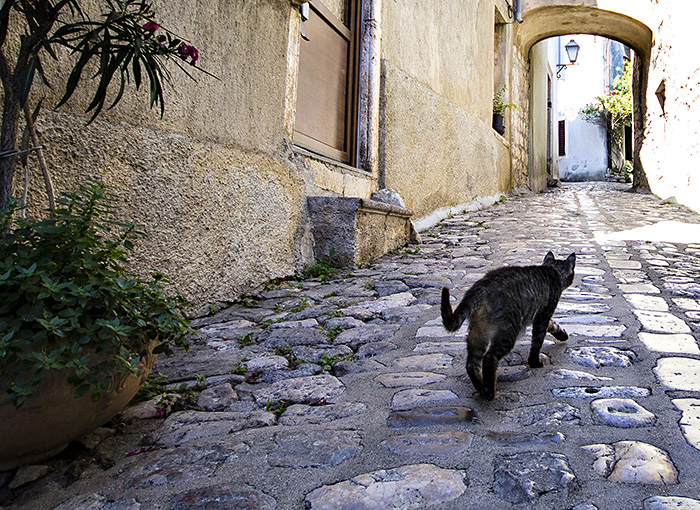 A cat walks along the cobbled streets of Krk, the main town of the same-name island. 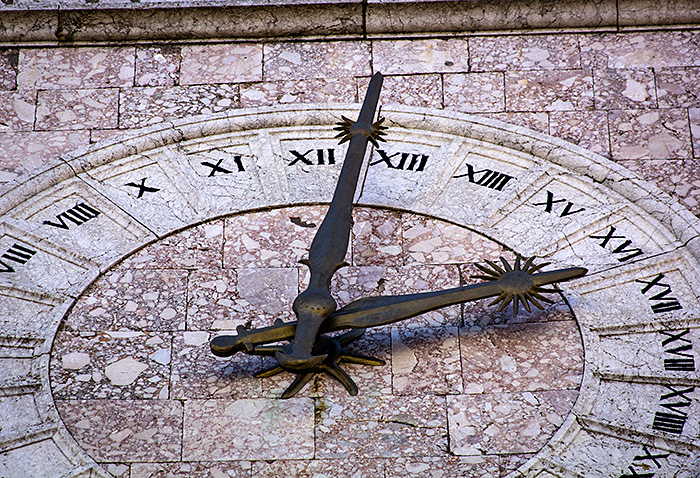 The clock in the Krk’s square. 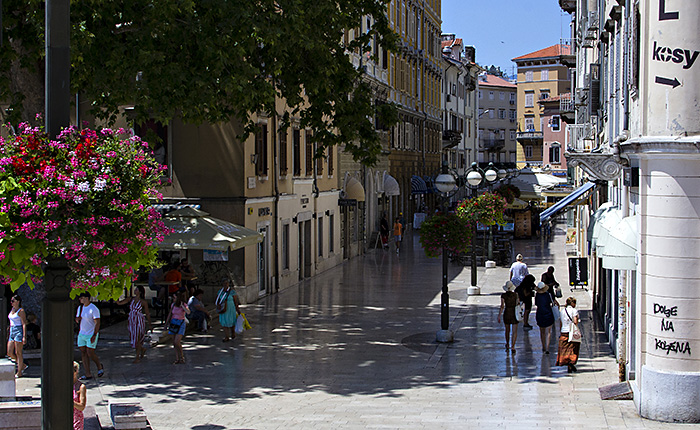 Rijeka, Fiume in Italian, a city famous in Italian history due to the so-called “Impresa di Fiume” (‘Endeavour of Fiume’), when a variegated group of fighters, led by the Italian poet and writer Gabriele D’Annunzio, occupied it from September 1919 to December 1920 in an attempt to annex it to Italy (it was disputed by the nascent Yugoslav state).
Even today, historians are divided on the evaluation of those 15 months, also because in the following years, fascism glorified that venture. However, if we really want to apply a political etiquette, it is perhaps the anarcho-syndicalism. In fact, the “Carta del Carnaro”, the constitution given to the city during the occupation, was drafted by the anarcho-syndicalist Alceste De Ambris and proclaimed direct democracy, decentralization of power, collective sovereignty of all citizens without distinction of sex, race, language, class and religion, hospitality for anyone wishing to live in Rijeka, and so on. Not surprising, the only foreign state that recognized the “Regency of Carnaro” was the Soviet Union.
But apart from the constitution, it was the experience lived by the citizens of Rijeka who resembles anarchism, with exceptional freedom for the time, thanks also to the large influx of young people, intellectuals and artists that reached the city.
Perhaps this was one of the main reasons that in the end, paradoxically, it was the Italian army that had the international task to ”free” the city with cannon fire. 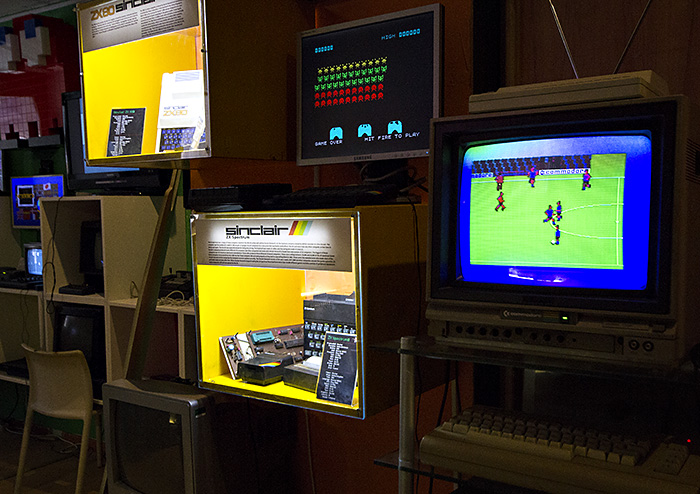 For those my age, it’s hard to hold back tears of emotion in front of the memorabilia at the Peek & Poke Computer Museum.
In this photo, you can see the Commodore 64 with the Football video game and the Sinclair ZX Spectrum with rubbery keys. There was also the legendary VIC-20, my first computer when I was 12, and the Commodore 128, my second computer (the latter is actually also on display in my little house in Benevento, former Maleventum). 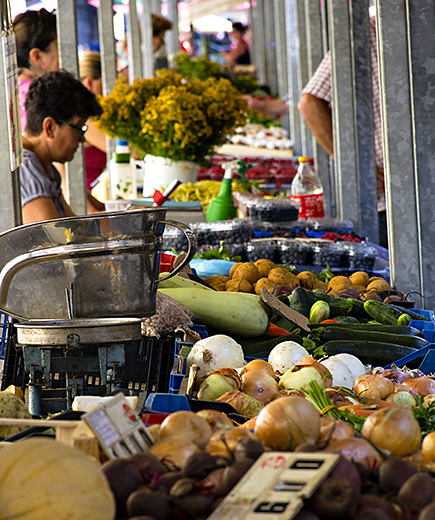 Cat overlooking via Medulica at night. 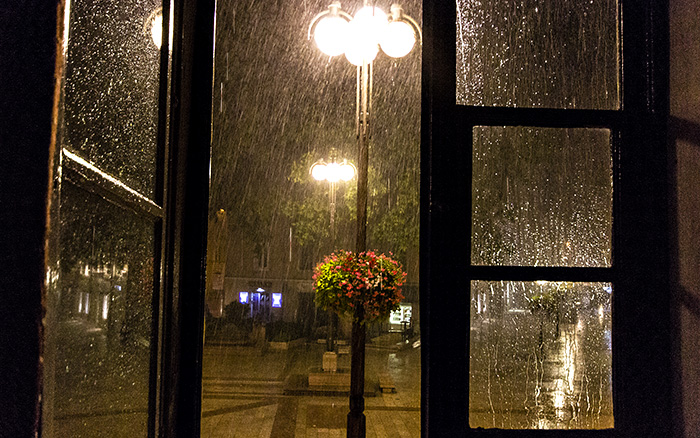 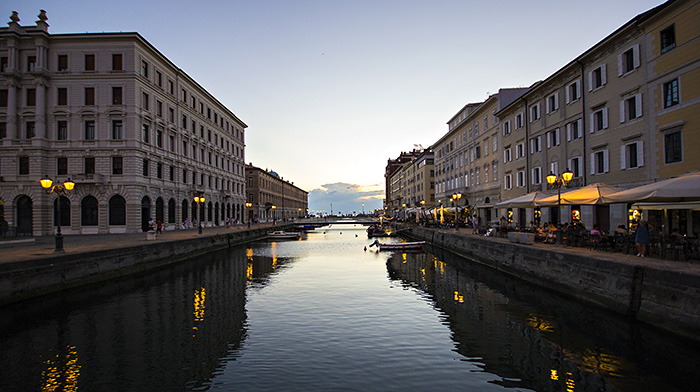 The Grand Canal in Trieste, Italy.
As far as I remember it’s the first time that an Italian city appears in Dekaro Diario! (it could be a symptom of senile fatigue coming.

). But let’s not exaggerate: Trieste became definitively Italian only in 1954.
Jokes apart, Trieste is a wonderful city, where you can stroll among majestic buildings of the Habsburg Empire, houses of wealthy merchants, and churches, also Orthodox. 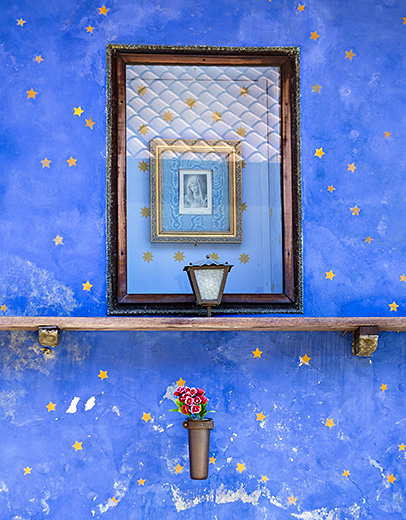 Icon of the Madonna on a street wall. 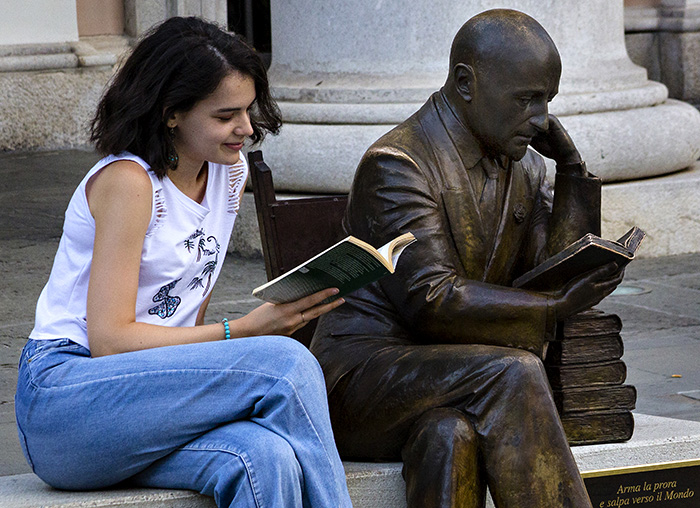 And that is the poet and writer I mentioned before: D’Annunzio, sat next to a girl, pretending to read solemnly. He was in fact an astute womanizer. 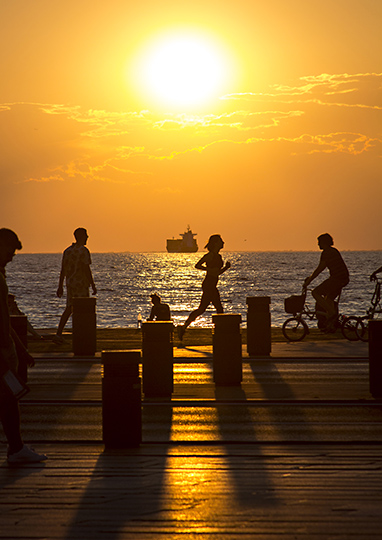 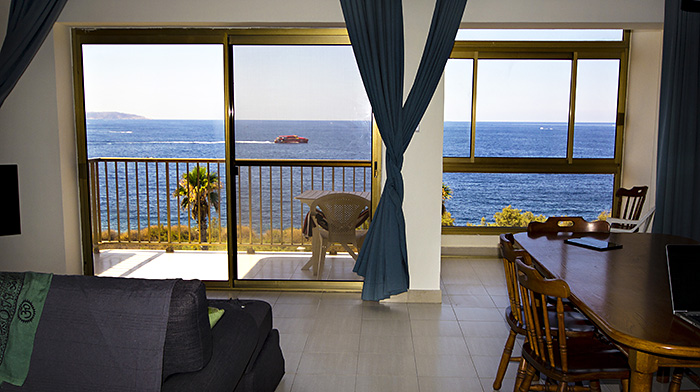 Happily back to Malta, in the apartment where I live now, with an amazing sea view! In the evening, I sit on the balcony, watching the sunsets, always unique. The ideal place to have a little drink and meditate on the impermanence of existence.

In the meanwhile, Dekaro Diario turned 10! It was in fact 2012 when I started it, on the occasion of a long trip to South and Central America. Therefore, I believe that it’s time to conclude this blog. I will make one last episode at the end of the year, it will be Oman, and we say goodbye. Maybe I will do another kind of blog in the future, before the inevitable departure, but I don’t know yet. We’ll see.