Hello everyone! This time a photo story of the animal market in Otavalo, the cockfighting, Quito, and the “mitad del mundo” (the half of the world) where the equator passes, about 20 km north of Quito. 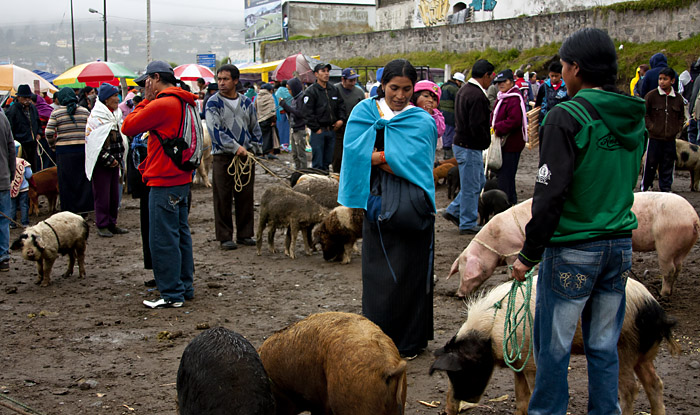 Otavalo comes alive on Saturday when the whole center becomes a giant market, mostly indigenous, from the square Los Ponchos all around until out of town, where there is the most interesting part: the animal market , with pigs, sheep, chickens, dogs, cats, alpacas, guinea pigs, etc. … 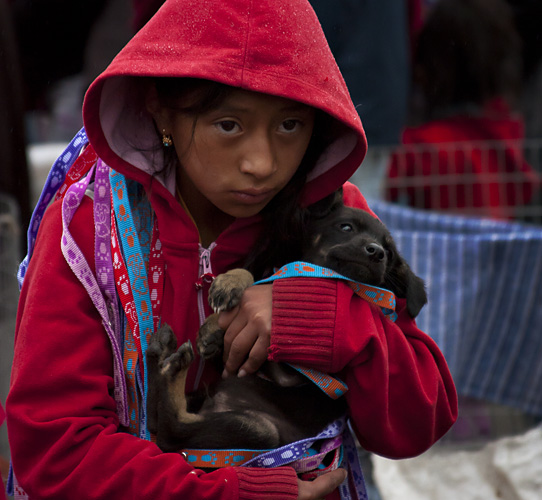 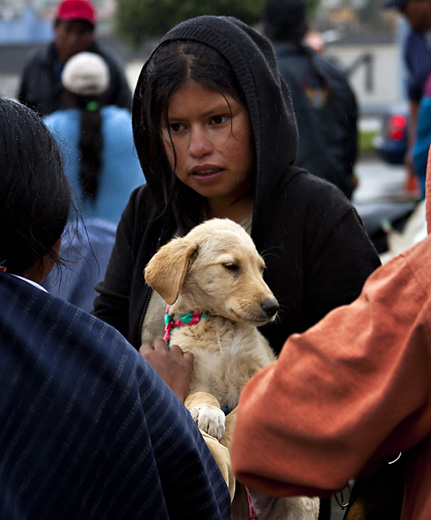 Another child with dog. 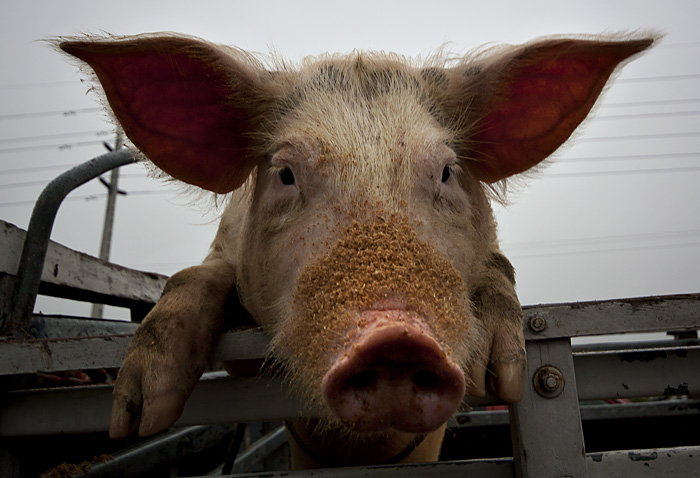 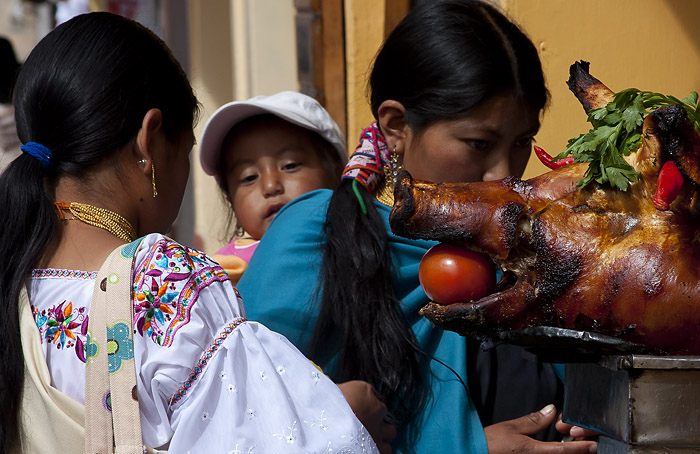 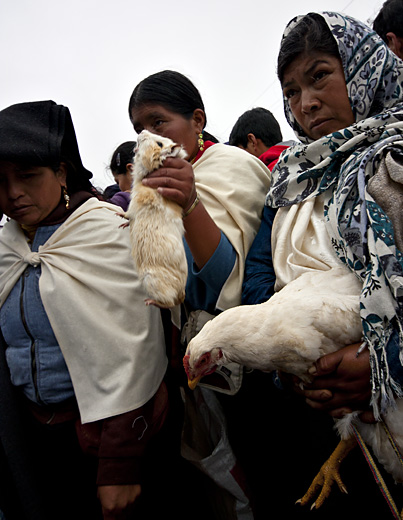 Some women were there with just one animal to sell. 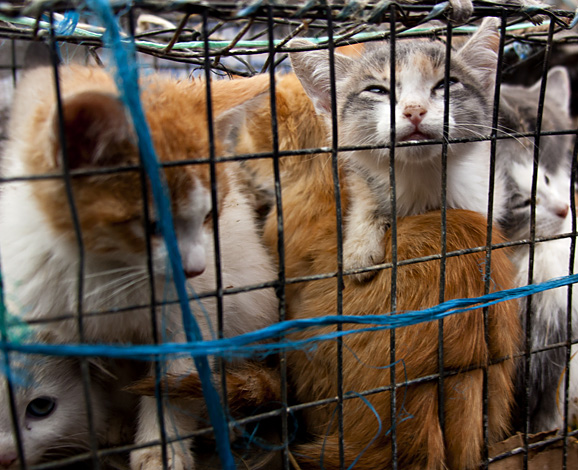 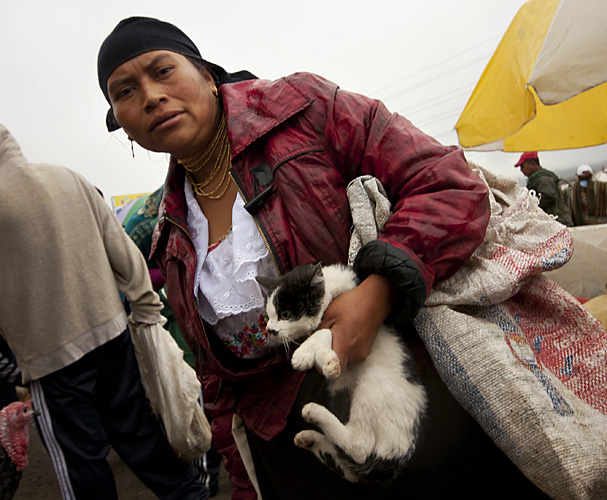 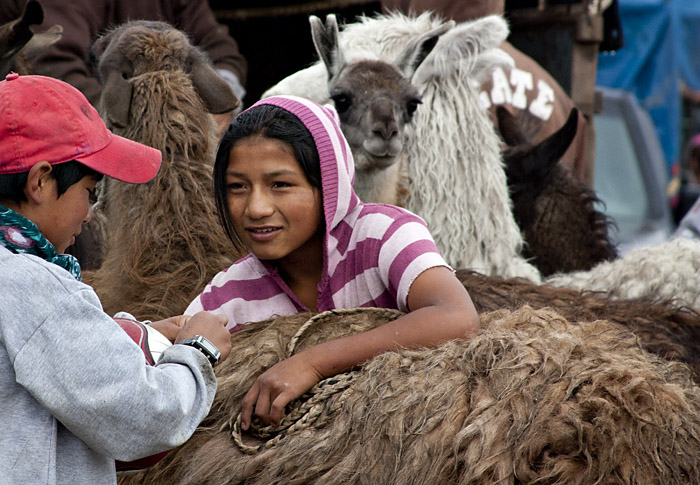 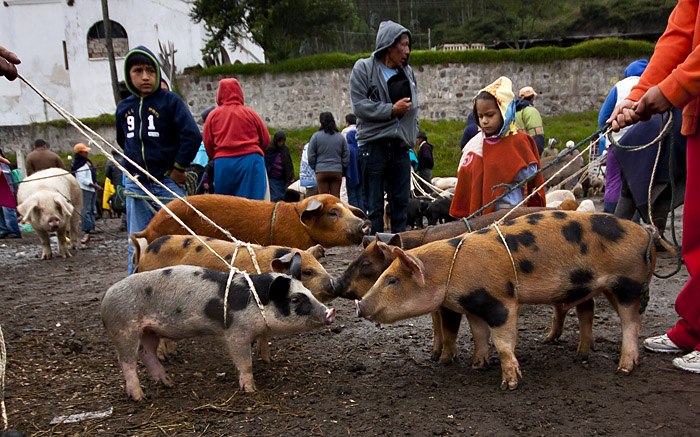 Little pigs meet each others. 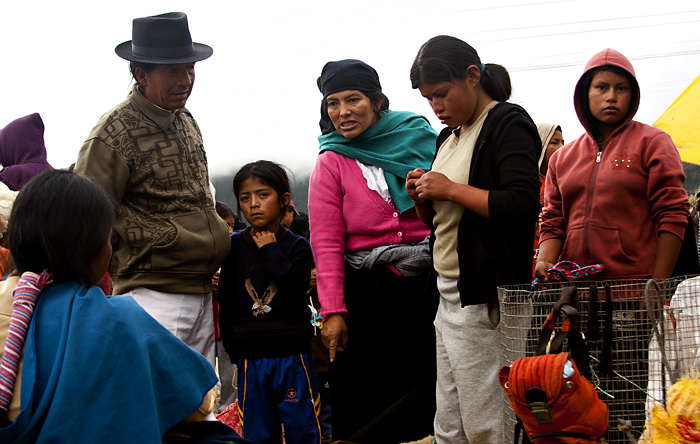 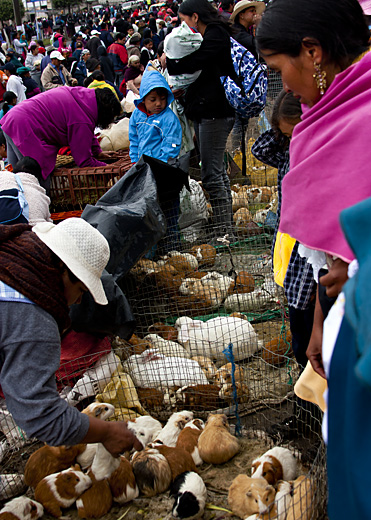 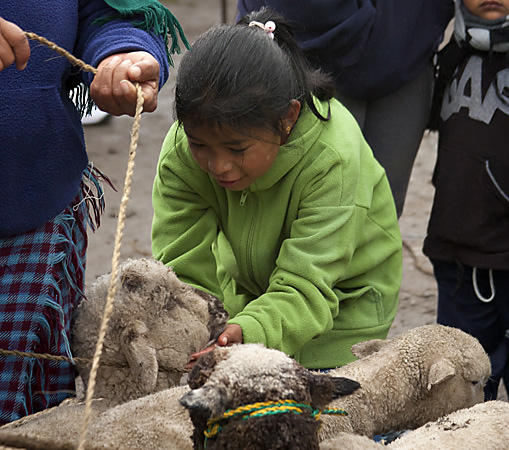 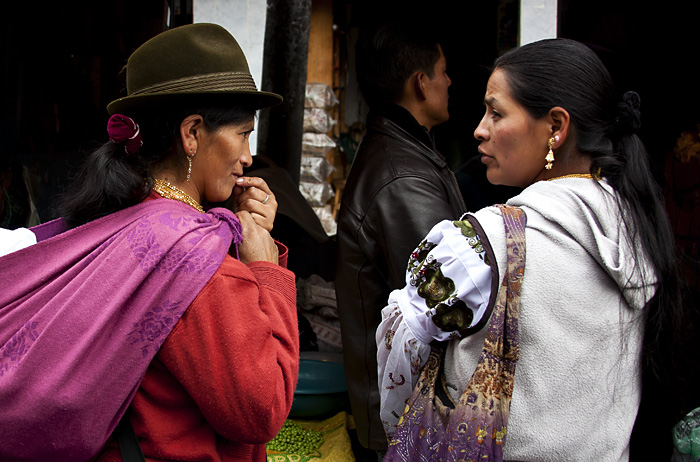 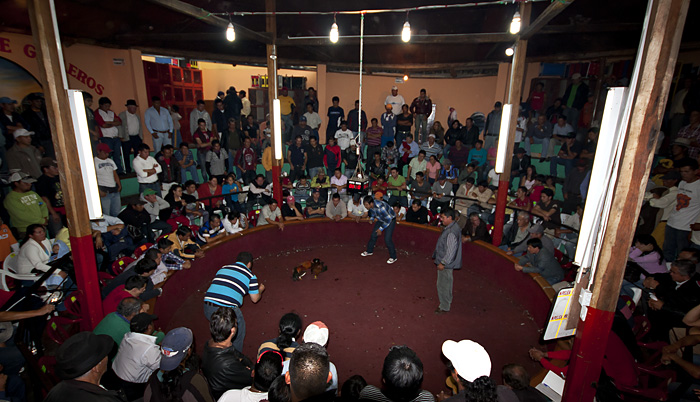 The cockfighting is more or less as you would imagine it or as you saw in some Hollywood movie. From a small door behind the curtains of the market, I came into a dirty and cramped place, with people a bit shady and dollar bills passing back and forth for betting…

Each cock has a coach (I guess it’s also its owner) who spurs him during the fight. Like football coaches, each of them has his own style: from those stressed all the time to those who remain impassive.
Even the cocks have their own fighting style: some were constantly thrilled and continuously pecking. In contrast, others preferred to remain almost stationary to dodge, for suddenly starting quick pecks at the opponent’s neck.

The bad thing is that the match ends with the death of one of the two cocks . If I knew it before, I would haven’t gone. But there is no doubt that the fight has its charm. It seems something from another time. 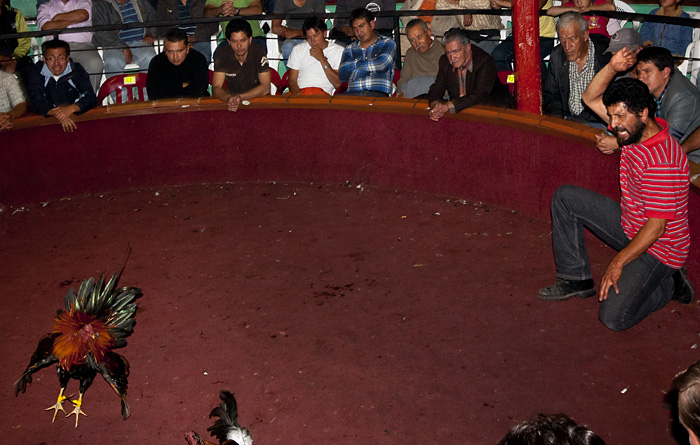 The last match I saw was the most beautiful, also because it ended in a draw, so both cocks were saved. Looking at the two coaches, I was curious to know who would have won: one was a big braggart that also incited the audience, the other seemed like an Eastern sage, quiet and focused.
In the first minutes, the braggart ran around the ring even more than his rooster, spurring with sweeping gestures and shouting, while the other coach almost didn’t participate. 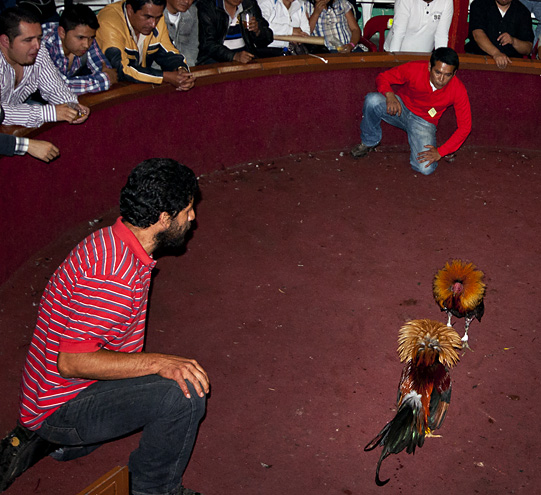 However, after about 5 minutes, they both started to behave similarly, giving just some silent advice to their cocks, from time to time.
At about three minutes left (on 10 total), the fight became very harsh. The two roosters pinched each other with ferocity and violence, without thinking to defend themselves, and the public became excited. There are some rules that I didn’t understand because sometimes the referee stopped the match, as in a boxing break, sparking protests from coach and fans or, vice-versa, he was requested to interrupt for some irregularities.
At the last minute, the two cocks were exhausted and bleeding, almost couldn’t fight, and even the coaches knew it would end in a draw and didn’t spur them anymore. 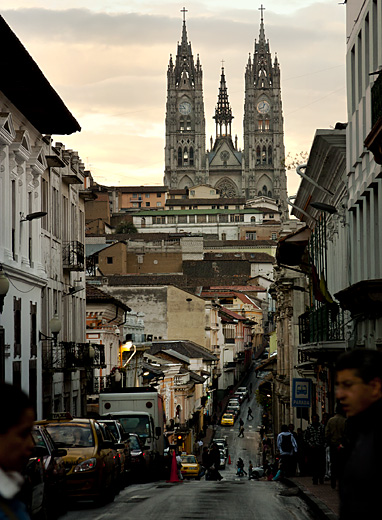 Quito, the capital of Ecuador, is located 2800 meters above sea level. The beautiful historical center, the “Old Town”, is mainly composed of colonial buildings. 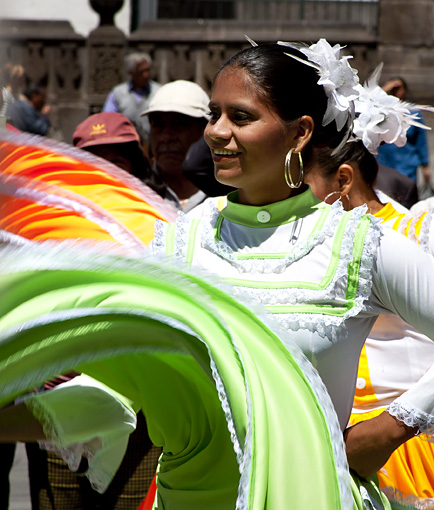 A traditional dancer at “Plaza Grande” in Quito, where is located the government’s palace. Here, almost every day, demonstrators demand their rights or protest against government decisions. Indigenous, animal rights activists, trade unionists, etc…
I was told that often president Correa comes out to discuss directly with the activists. 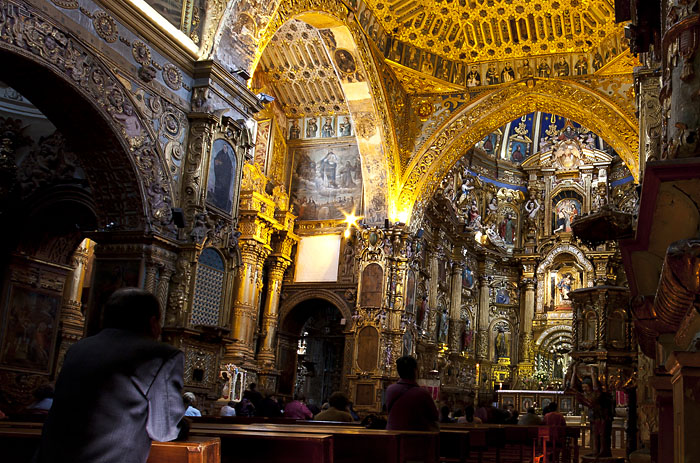 The church of San Francesco. In the historical center of Quito, there are many baroque churches, extraordinary notably inside. Their style is unique, “the school of Quito”, born from the fusion of indigenous and Spanish styles, including Moorish. 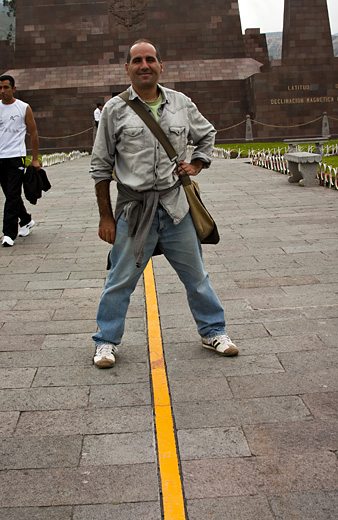 One foot in one hemisphere and one foot in the other, at “mitad del mundo” (half of the world).

I don’t know why Ecuador got this sort of “copyright” related to the equator. A quick view on the world map shows that it crosses at least 10 countries. So why has Ecuador taken its name, the heritage site “mitad del mundo”, the various museums on the equator, and so on? Yes, I will be more critical with the report of the places I visit from now on. Many things still don’t add up. 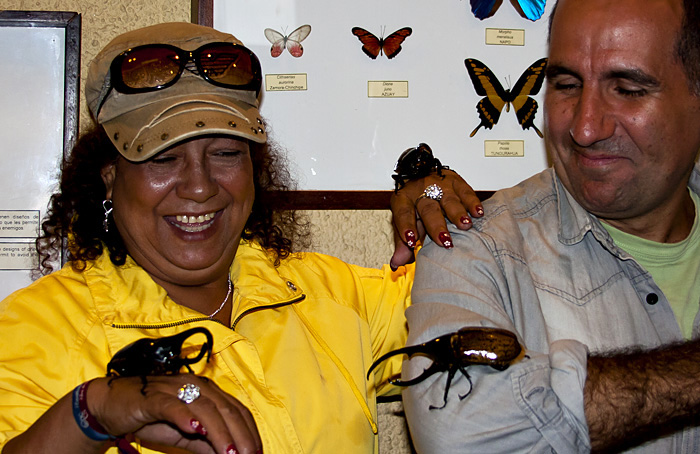 At the “mitad del mundo” I met two very nice ladies from Guayaquil, the second-largest city in Ecuador. Here we were in a small museum there, dedicated to insects and where it’s possible to play with giant cockroaches. 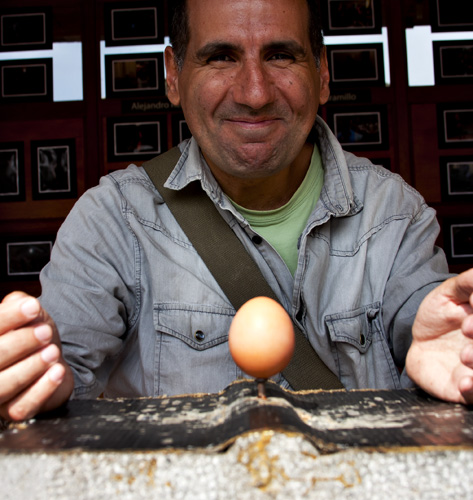 I answer the comment:
Thank you Yannick! And good luck with the Chelsea final!