Hi friends! After three months of travel, I arrived in Ecuador, a country of which, at the moment, I know only that, in fact, the equator passes on it. But we’ll discover it together.

After San Agustin, I took the road from Mocoa to Pasto, spectacular and dangerous. Rocky walls with dense vegetation, hundreds of meters high, sloped down to the river, which flowed into a strait below. There were many waterfalls, with their water sometimes crossing our narrow dirt road. The view from up there was amazing.
However, it was also scary. The wheels of the bus were constantly on the edge of the road. Looking out the window, I couldn’t see the road below, only the cliff. When we met another vehicle began complicated maneuvers, often in reverse, to pass both.
When it became dark, it was even worse. It started heavy raining, with very low visibility and the road became mud. At that moment, I also remembered that in those areas, on the border with Ecuador, it’s dangerous to travel at night for the risk of being attacked by armed bandits, as it happened a few years ago at an Italian guy that I met in Santa Marta, Oscar.
However, in the end, all right, and after a day in Pasto, I arrived at the border.

I had my passport stamped for exit from Colombia, and I was already walking to Ecuador when a big rude Colombian policeman called me for a search.
This time they also checked the two main pockets of the photo-backpack, the ones that in my last post, jokingly, I said were hiding 3 kilos of cocaine. In reality, however, they contain something perhaps even more valuable: the red panties of Joyce. Not so much for Joyce, a Brazilian girl with whom I stayed more than 10 years ago, but because it seems to me that these panties bring good luck. So I keep them always with me (not wearing, of course

)
In many controls, a bit ‘all over the world, when found, the policemen had always been very professional. But professionalism does not seem home in Colombia… he started laughing “Ah ah ah ah ah, I didn’t think… you didn’t seem … ah ah”. No, wait, those are from a Brazilian girl… that you could just dream in the night, maybe in your lonely wanks (actually at the end I didn’t add this last part of the sentence, because I’m always careful to not saying something that might hurt).
“Mhmm … true? True?” Of course it’s the truth! Anyway, are we here to find drugs or to talk about lucky charms? And please stop enlarging them with your ugly hands for observing from all angles…
Finally, shortly after, the search ended, and I arrived in Ecuador.

I took a bus from the border towards Otavalo. About 10 minutes later: stooop. The police came up on the bus and checked everybody’s documents. After that, me and some people had to go down for a search.
Again, they searched above all my photo-backpack. And again especially on the same side, the rear for the laptop.
So, an advice for any would-be drug traffickers: never put it there!
In a previous search, they had pulled out the internal parts of my bag, breaking them. This time the policeman made tiny holes inside it with a boxcutter. When I protested, he said: not worry, no break, no break … and in the meanwhile kept puncturing it with his knife. Dunno, maybe “break” has another meaning for them.
Meanwhile, he was pulling Zeus, the police dog, to sniff these tiny holes. But Zeus didn’t show any interest, he was sniffing around like crazy, except my backpack, and despite the policeman was forcefully pushing his head inside, there was no way, nothing that would attract his sniffing, not even Joyce’s panties, until a boy, a bit ‘strange, also in line for the checking, gave him a kind of pudding on which he jumped to devour it, among the desperate cries of the policeman “noooo what have you done? Now he will not sniff anymore!”. And, amid the general laughter, also this search finished.

I went back on the bus, and we left. About one hour later: stoooop. Again the police on the bus, again a check of everybody’s documents, but this time I had the honor to be the only one to go down for the search. Very long, on both backpacks, with the driver protesting, “he has already been checked!” “Don’t meddle… let us do our job…”.

So, with 4 searches, I strongly advise to not bring drugs within 200 km of the border between Colombia and Ecuador. And if you really must, at least remember to always carry with you a pudding to donate to the dog. 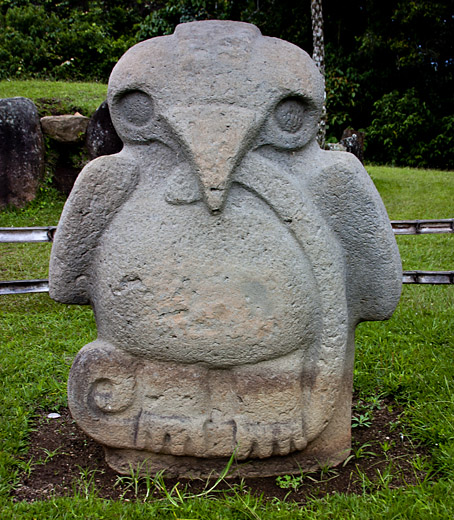 It is said that this sculpture represents the “Double-self”: the warrior with the spirit of the animal that guides him. 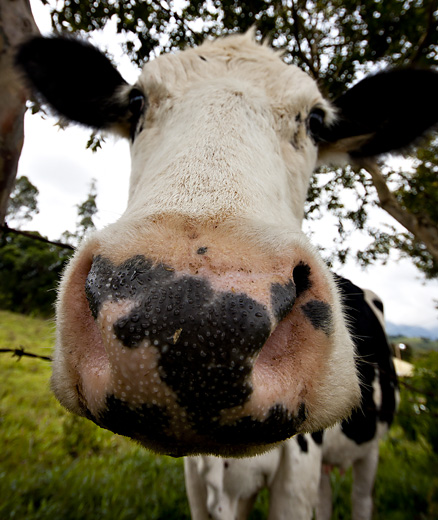 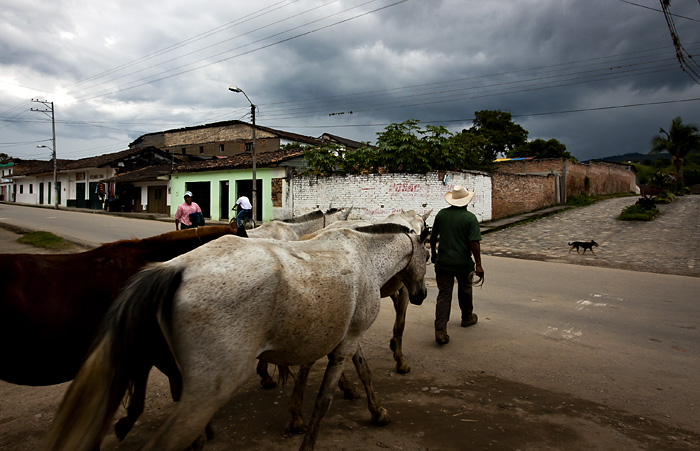 A street in San Agustin. If you happen to go there, don’t miss the Italian restaurant of Ugo, a nice Italian guy who even offered me dinner.
To reach him, ask Anibal, a local guide (if you don’t find him, he will find you). He will be happy to take you there with his motorbike, at high speed without headlights, in total darkness, and when you point it out, no problems: he will turn on the mobile phone display as a beacon. And indeed, in that context, it seemed all the light in the world. 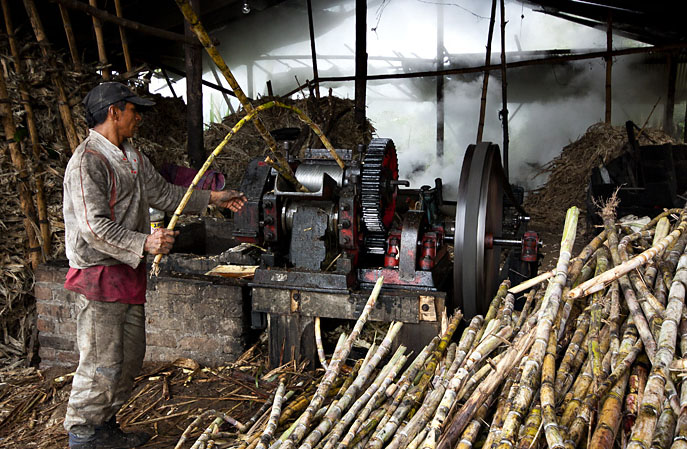 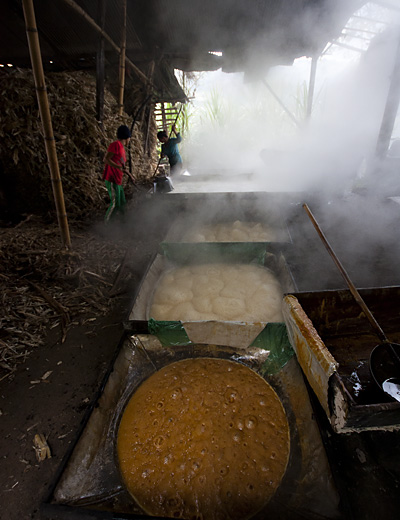 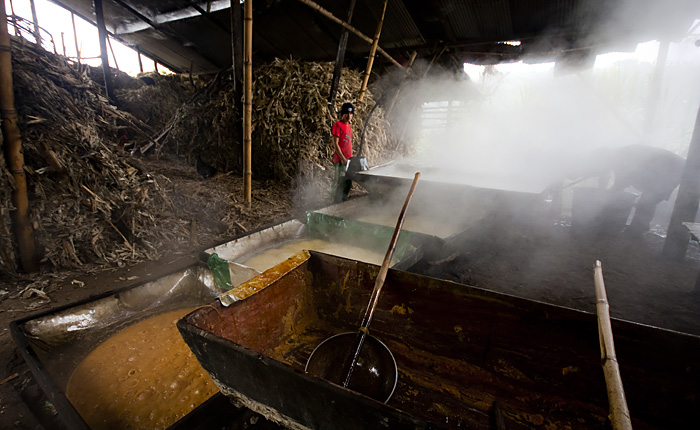 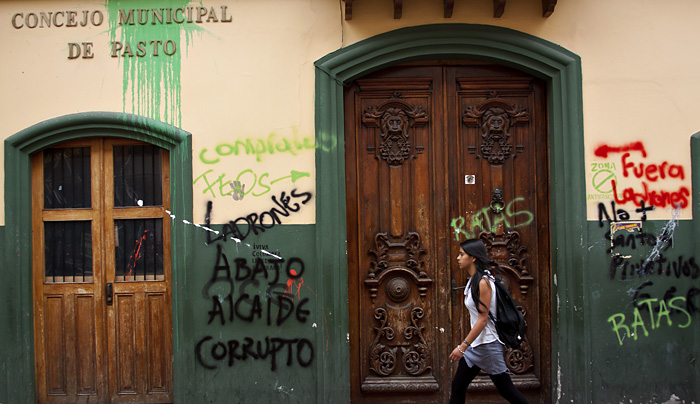 Writings on the City council wall against politicians in Pasto, Colombia. As almost everywhere in the world, they are not much loved by people. 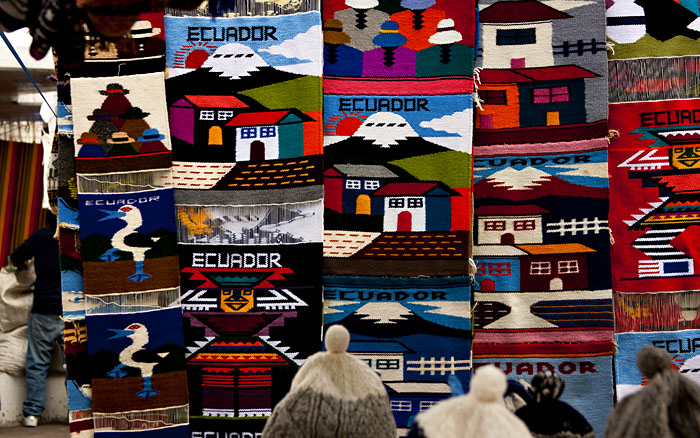 And finally in… Ecuador, in the famous Otavalo market. 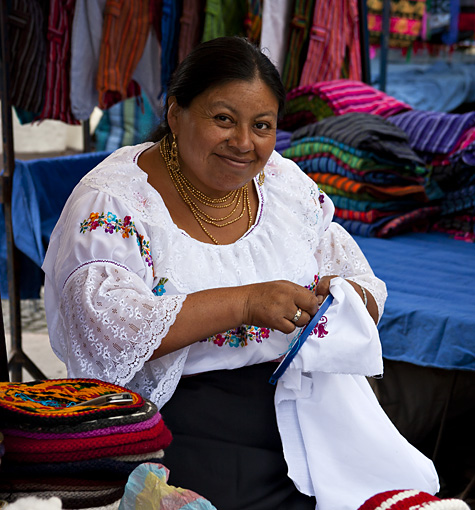 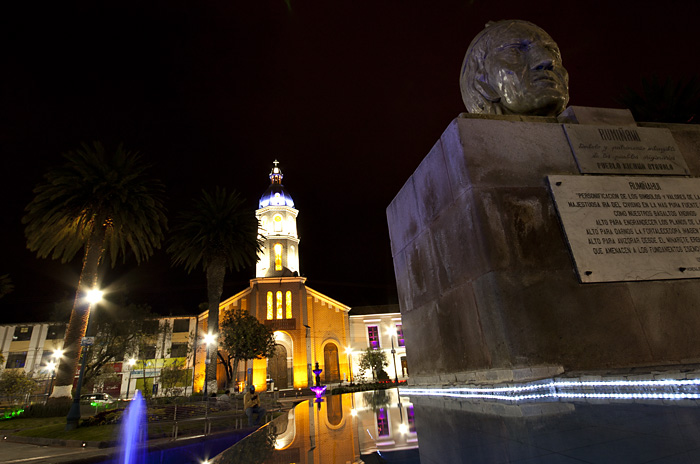 Otavalo is located at 2500 meters and is surrounded by three volcanoes, including the Cotacachi, 5000 meters high. Still today, it is inhabited mainly by indigenous peoples, who came here in ancient times and formed a sort of confederation with other advanced communities around. They were subdued, already before the arrival of the Spaniards, by the Incas, after decades of war that led to the massacre of most of the population. 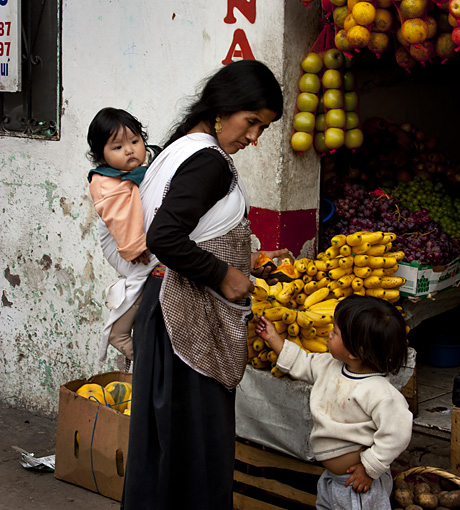 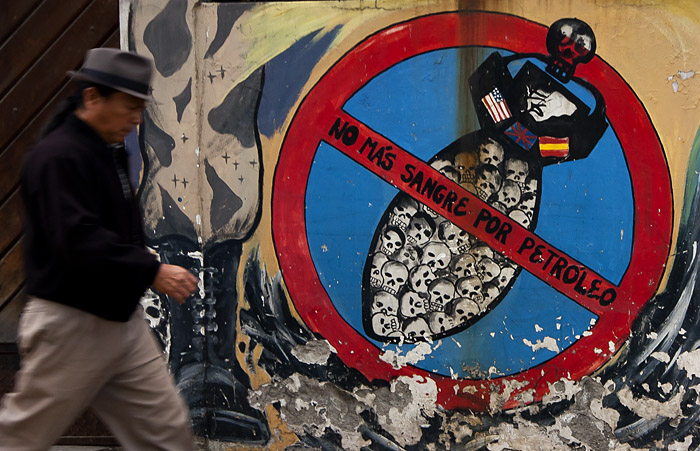 No more blood for oil. 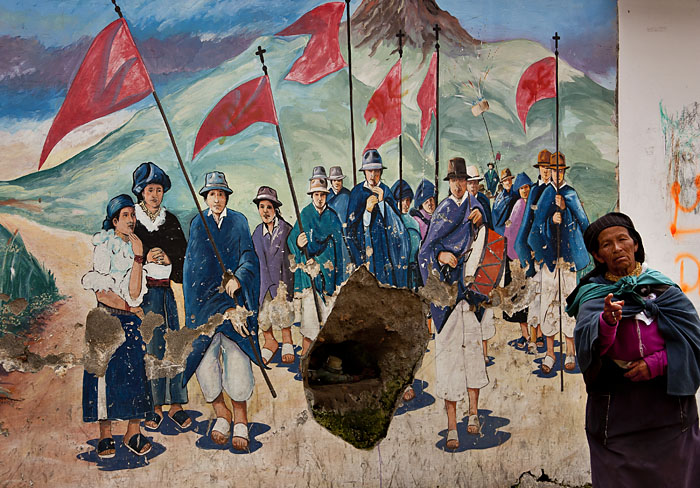 I want you… for the revolution! 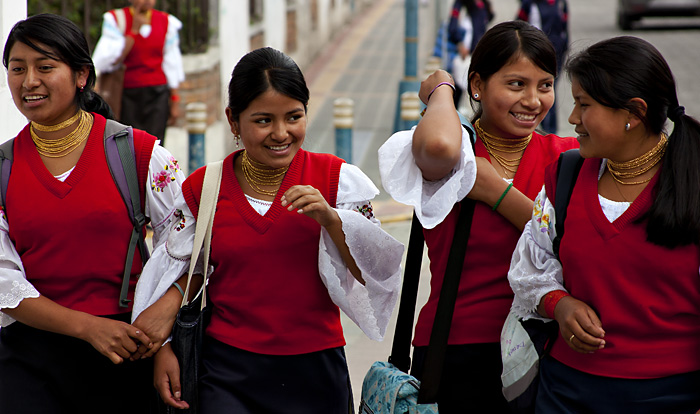 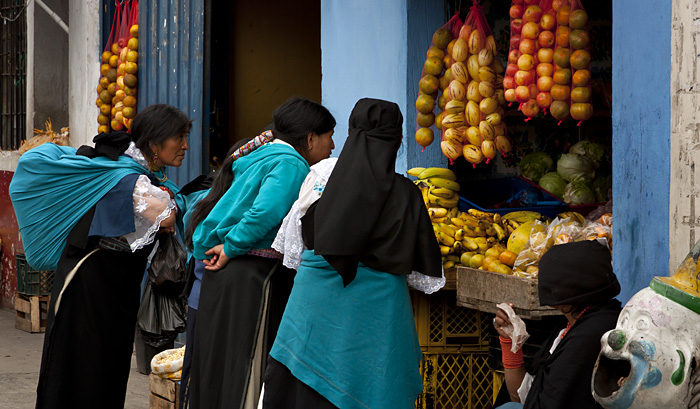 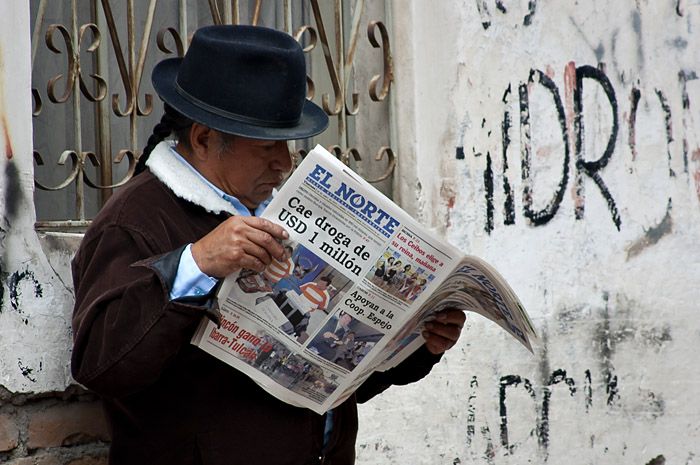 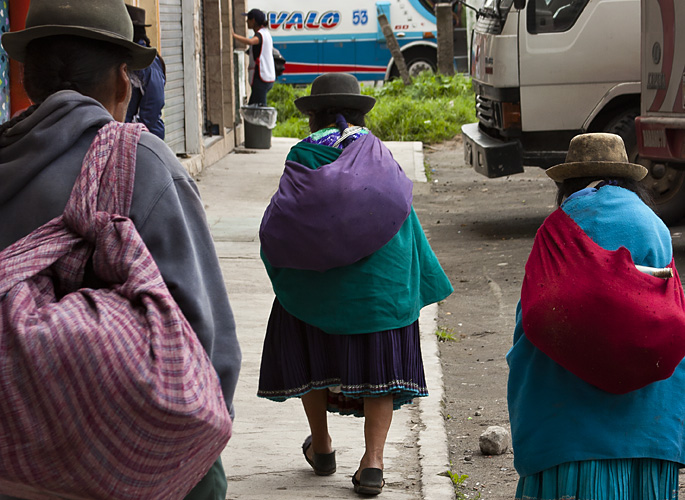 At the bus station. 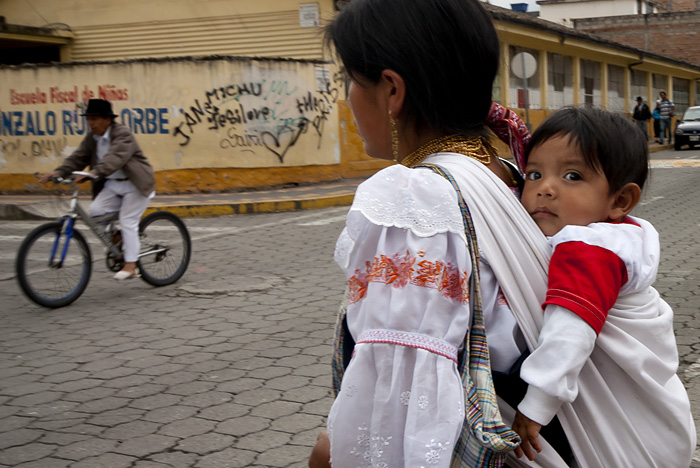 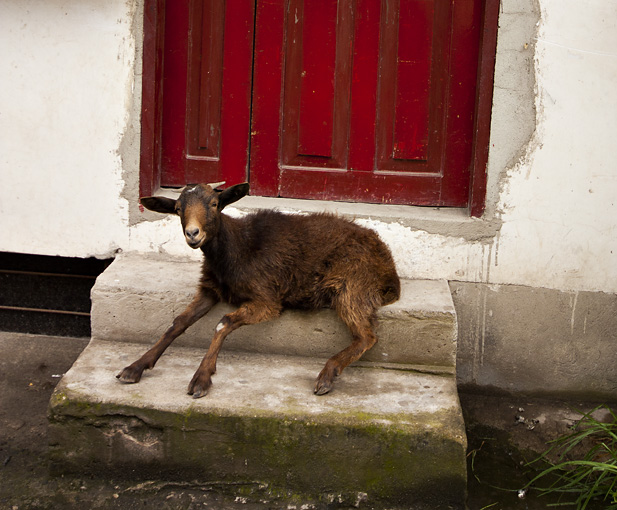 Abstract composition with goat in the middle. 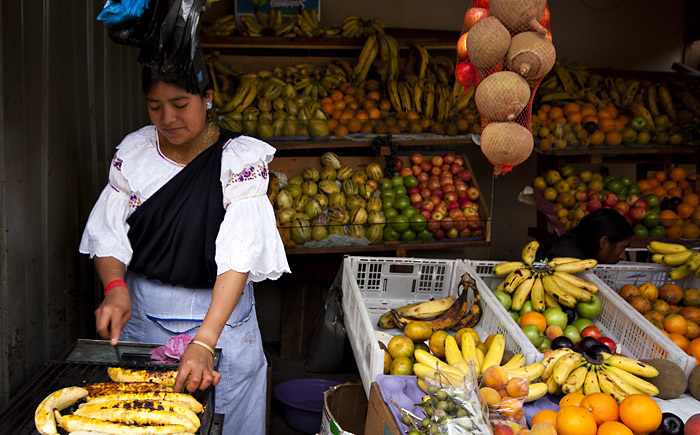 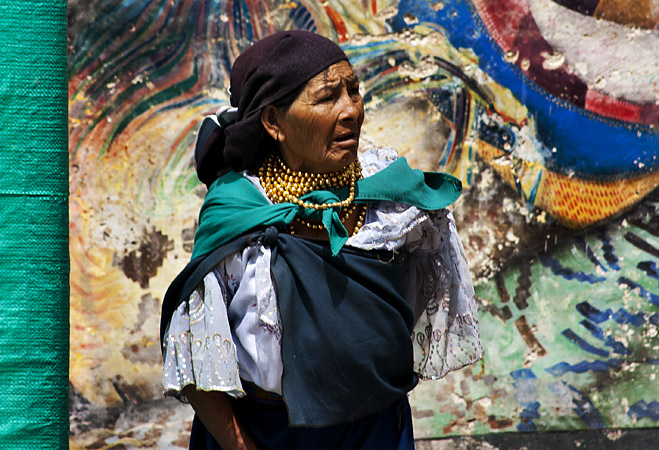 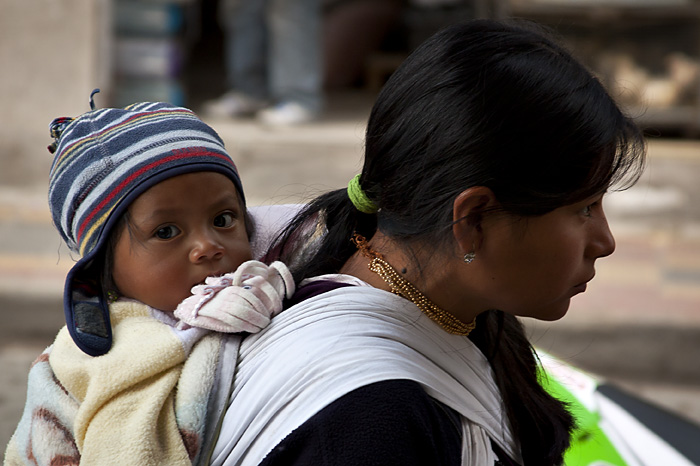 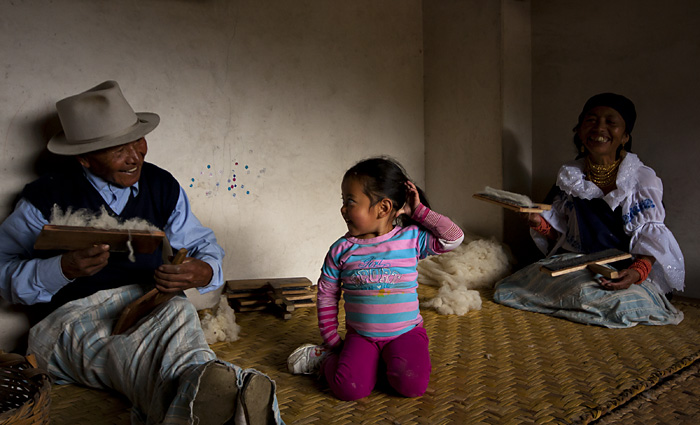 One of the few families in the world still working the wool by hand, without machinery. I bought a hat from them, $2.

I reply to the comment:
Hi Yannick! My plan is to go also in all the little Central America countries (Nicaragua, Costarica, Guatemala, etc…). Not sure if I can make it, because of the money, but I think I will.

54 thoughts on “Searches at the border and Otavalo in Ecuador”