Hello friends! This time I will tell you about Uzbekistan, the country in Central Asia where there are some of the most beautiful cities of the Silk Road: Samarkand, Bukhara and Khiva. 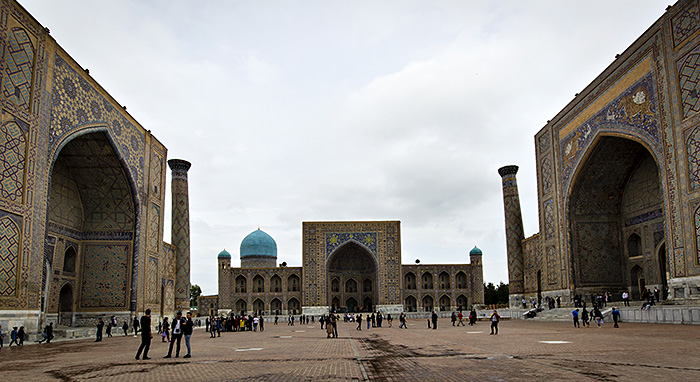 From Tajikistan I arrived in Uzbekistan in the mythical Samarkand, a magic name that perhaps most of all recalls the Silk Road. Dead and risen many times, already in 329 bC enchanted Alexander the Great who praised its incredible beauty. Destroyed almost completely by Genghis Khan in 1120, it rises again in full splendor a century and a half later under Timur as the capital of his empire. The last “resurrection” takes place under the Soviet Union with the restoration in great style (and perhaps a little arbitrary) of mosques and madrasas.

This is the center of Samarkand, called Registan. On the sides there are three medressas (Islamic schools). The one on the left is from the fifteenth century, the other two from the seventeenth century. 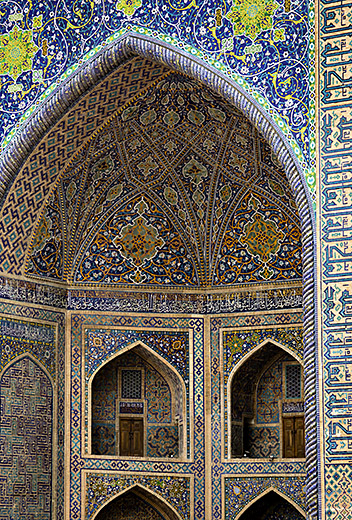 The splendid tile decorations of the central medressa, Tilla Kari. 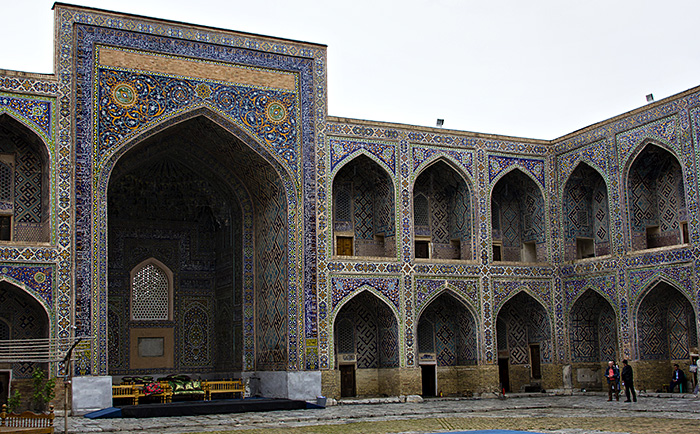 Interior of the Sher-Dor madrasa. Most of the former student rooms, here as in the other medressas, are now souvenir shops. 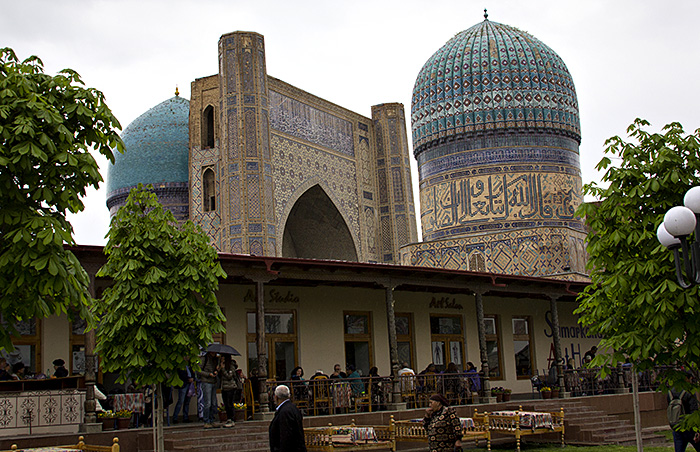 One of the new tourist streets with the Bibi-Khanym mosque in the background.
A legend tells that it was built by a wife of Timur as a surprise for her husband during a military campaign. But the architect fell in love with her and asked for a kiss in return. When Timur came back was delighted with the gift but noticed the kiss mark on the architect’s cheek and understood. He then executed him and imposed the veil on the women of his empire to avoid to tempt men anymore.

There are many ancient tales, especially Persian, which recall Samarkand. At the end of my previous post I mentioned one. It is about the first adviser of the caliph (there are various versions, in some is a soldier with his own general, in others a servant with his own merchant and in others the city is not Samarkand but Samarra, in Iraq) who returns from the market terrified saying that there was there Lady Death, dressed in a black cloak, who came for him. He then asks the caliph for the fastest horse to escape from her with the intention of arriving in the evening up to Samarkand. After the first adviser run away the caliph goes personally to the market and once there finds the lady with the black cloak. He confronts her saying how she dared to scare his first advisor. And Lady Death answers “I didn’t want to scare him. I looked at him with curiosity because I didn’t understand how he could be here since we have an appointment this evening in Samarkand”.

In my case, instead, as you can see I managed at lest for now to escape Her, and even in this Dekaro proved to be a bit special. 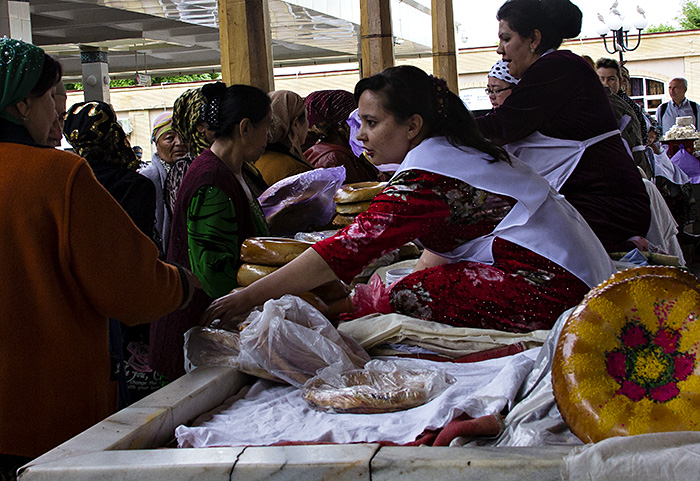 Ladies at the market. 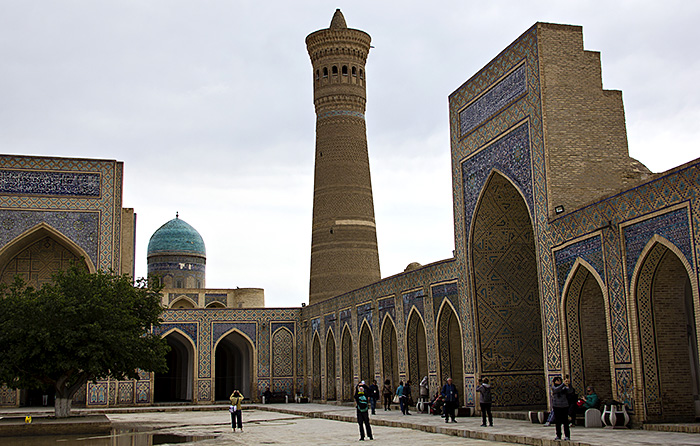 From Samarkand I came to another beautiful and ancient city: Bukhara (or Buxoro). In the IX and X centuries it became one of the greatest cultural centers of the known world, a “pillar of Islam” that rivaled Baghdad, Cairo and Cordoba. At its peak it counted as many as 113 medressas, in which some of the greatest philosophers, poets, intellectuals and doctors of the Islamic world were formed. 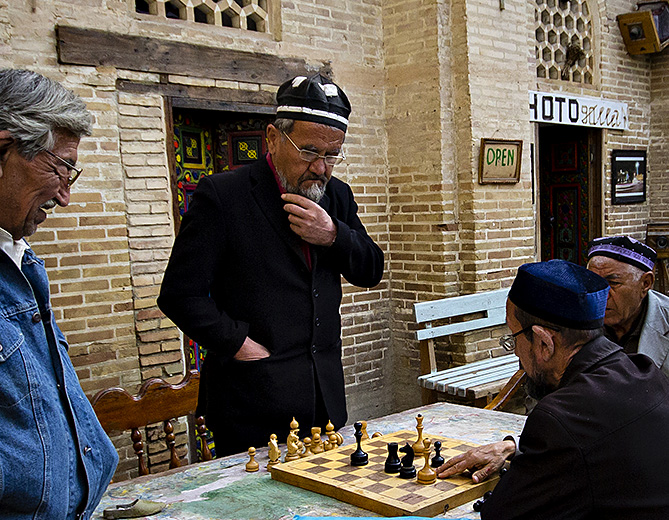 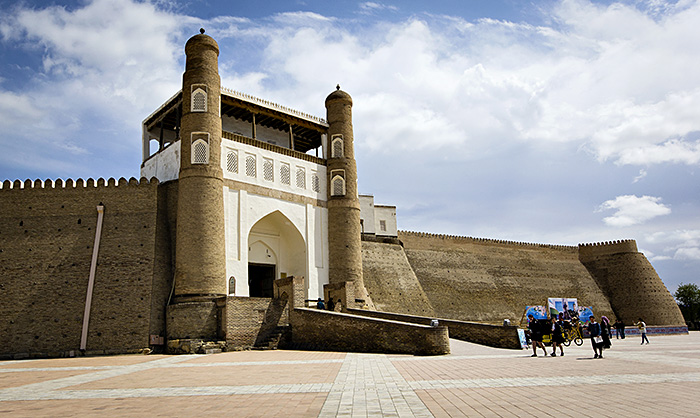 The Ark, a fortified town within the city. Built in the 5th century, it became the residence of the emirs until 1920 when it was bombed and conquered by the Red Army. 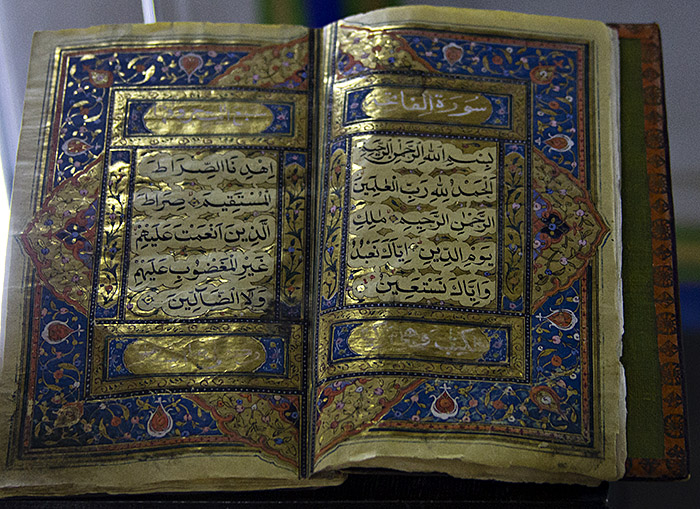 Inside the ark the rooms have been converted in museums. This is a manuscript of the Koran of the nineteenth century. 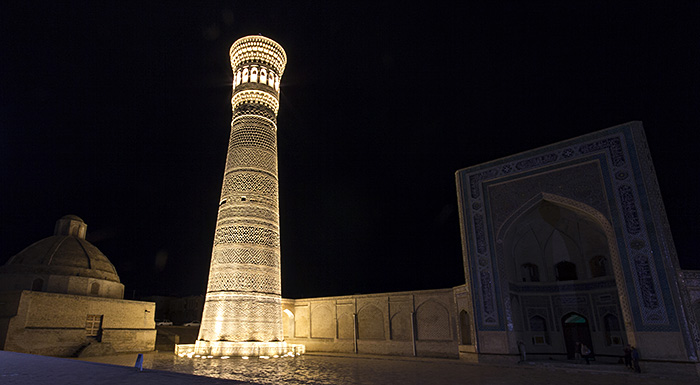 The Kalon minaret by night. It was built in 1127 and was probably the tallest building in Central Asia at that time. Even Genghis Khan that we saw was certainly not a great lover of the artistic heritage (at least until the next usual historical review that maybe will turn everything upside down and will show us a refined and art-loving Genghis Khan) was so impressed that ordered to spare it while his troops destroyed the rest of the city.

The third of the ancient and extraordinary cities on the Silk Road is Khiva (or Xiva). The fortified city inside the walls, called Ichon-Qala, is perfectly preserved.
Khiva was also famous for having an infamous large slave market until the end of the nineteenth century. The slaves were captured mainly among the nomadic tribes of the steppes around and among Russian soldiers. 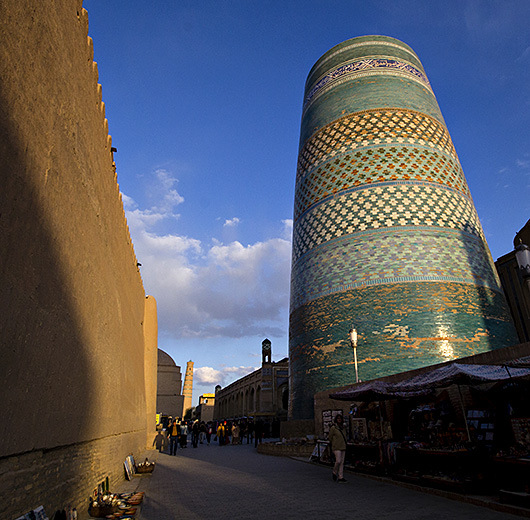 The Kalta Minor minaret, one of the symbols of the city. The reason it looks a bit chubby is due to the fact that it was designed to be much taller, perhaps the tallest in the world. Begun in 1852, the works were interrupted a few years later following the death of the khan. 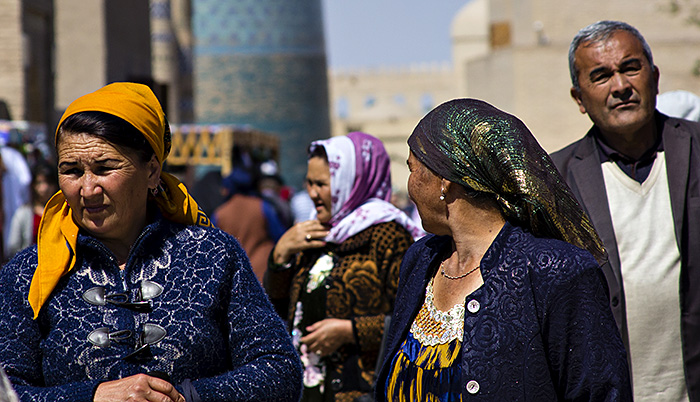 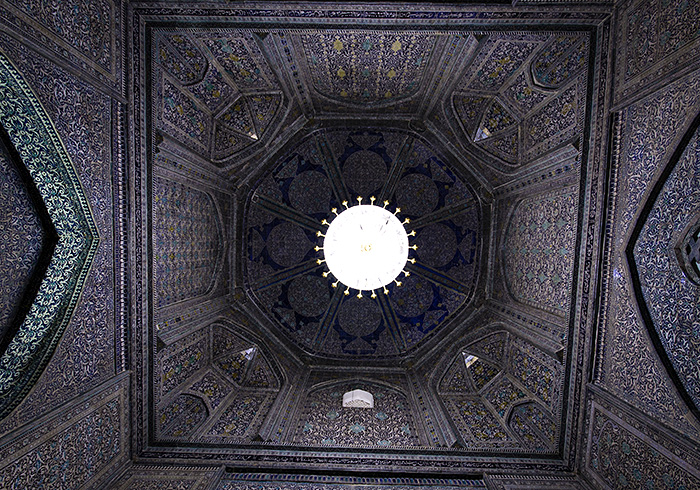 The extraordinary ceiling of the mausoleum of Pahlavon Mahmud, an unbeatable wrestler of the fourteenth century who was also a poet and philosopher and is considered the patron saint of the city. This is one of his poems:
It’s easy for me to smash 300 mountains “Kuhi Kof”
It’s easy for me to paint the sky with blood from my heart
It’s easy for me to be in prison 100 years
But it’s difficult for me to spend a moment with the stupid man!

In my case, however, all four are difficult. 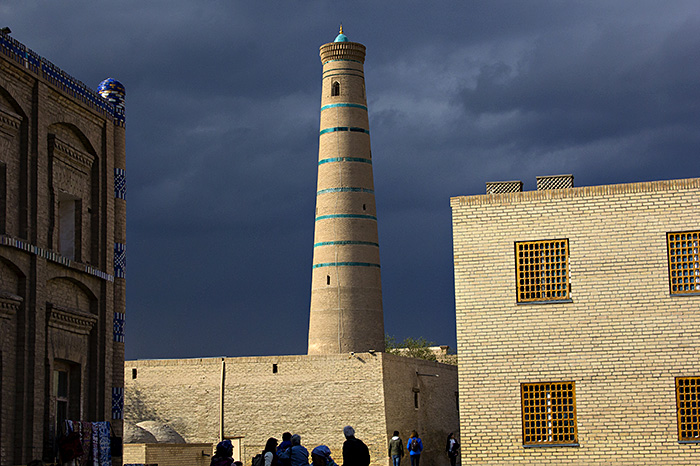 The minaret of the Juma mosque. 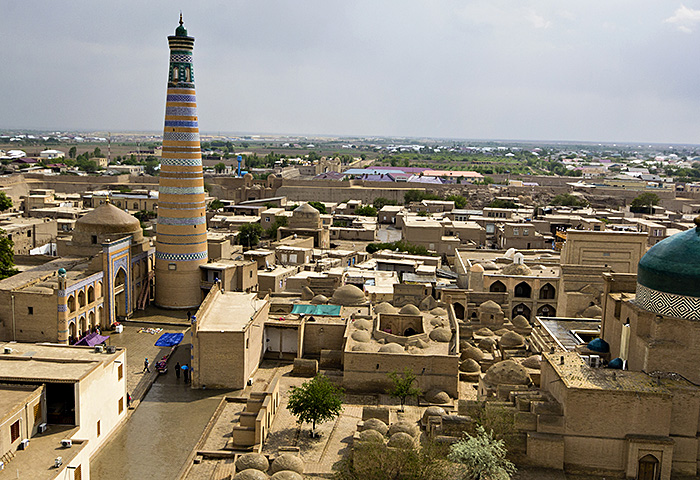 The northern area of the city. On the left is the Islom Hoja madrasa and its minaret. Built in 1910, they are among the most recent monuments. The dome that on the right is the mausoleum of Pahlavon Mahmud, with around many khan tombs in the shape of a small dome.
The photo was taken from above the minaret of the previous photo. 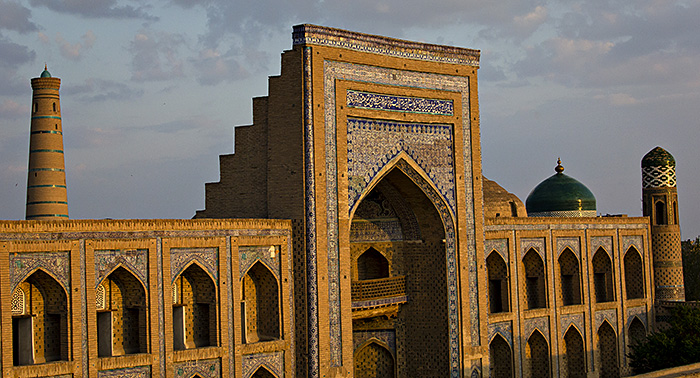 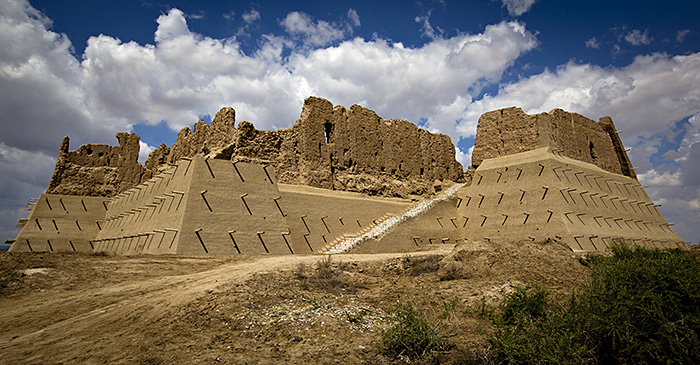 One of the fortresses of Elliq-Qala, a chain of fortified cities in the desert, some over 2000 years old. In this case, as you can see, the base has been rebuilt.
Elliq-Qala means “fifty fortresses”. At the moment there are about twenty of them, so it is possible that there are others still hidden in the desert sand.
These ruins are located in Karakalpakstan which is an autonomous republic within Uzbekistan. 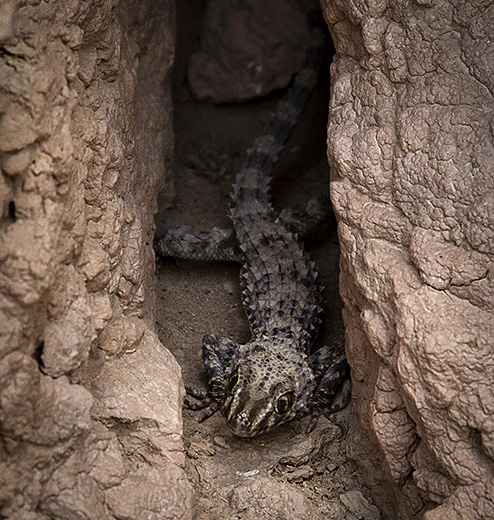 Wizard in the fortress. 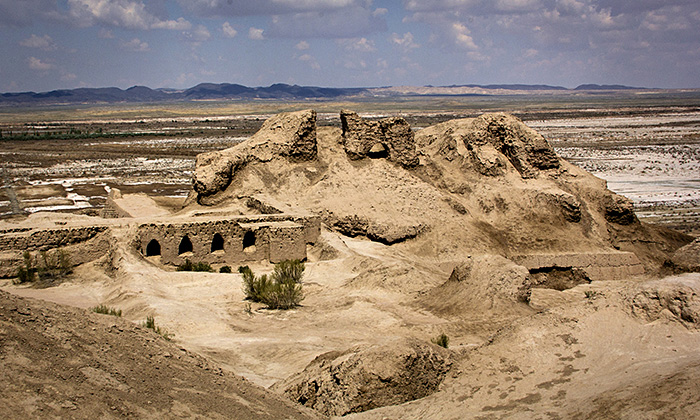 Another fortress, in this case the ruins of Toprak Qala, the main complex of ancient Khorezm during the 3rd and 4th centuries. It was abandoned in the sixth century.

The white on the desert behind the ruins is salt. The wind carries it from the bed of the Aral Sea, a salt lake which is located a few hundred kilometers to the north and was the fourth largest lake in the world. An absurd decision of the Soviet Union to divert the rivers that flowed into its waters to irrigate the desert has led to almost total drainage in a few decades, causing an environmental and also economic catastrophe. Cities by the sea that lived on fishing are now in the middle of the desert and have been almost all abandoned. 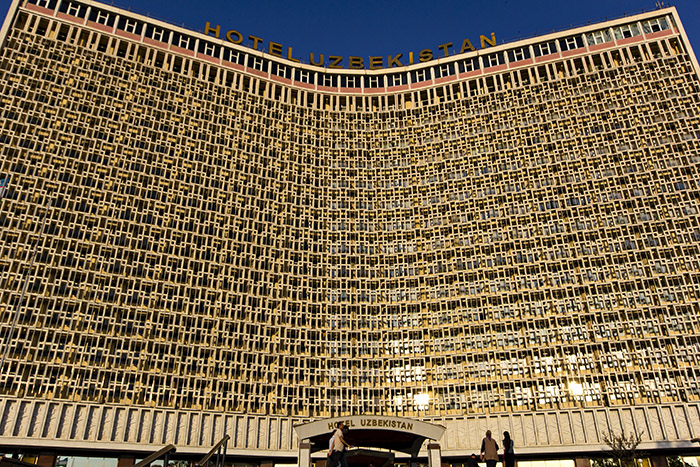 And finally Tashkent, the capital. Even Tashkent is an ancient city on the Silk Road, but the little that survived previous destructions was definitively destroyed by an earthquake in 1966.
It is however a very pleasant city. There are many parks, wide and clean streets with beautiful modern buildings and those that were once futuristic Soviet buildings like this, the famous Hotel Uzbekistan. 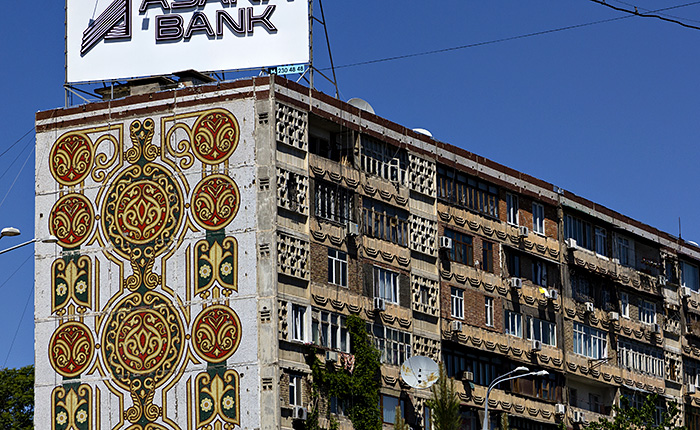 Some of the old buildings are decorated. 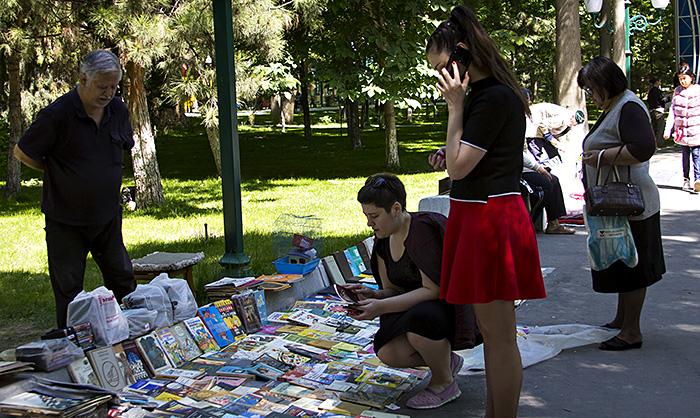 Books for sale in a park. 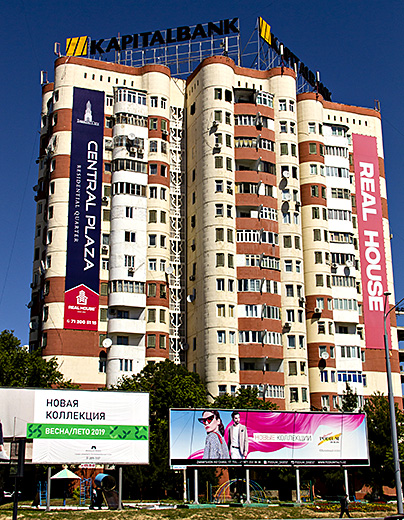 One of the many examples of a poor Soviet building stormed by capitalism. 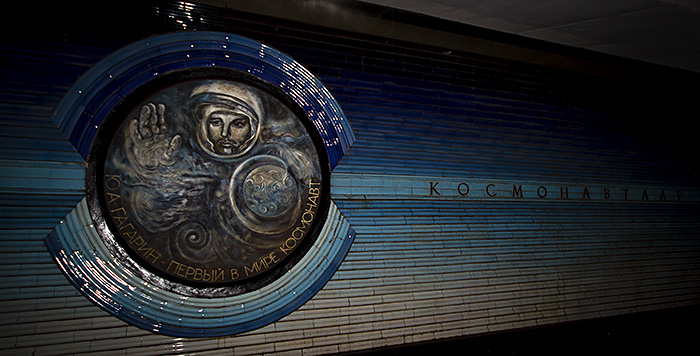 Many metro stations are richly decorated with thematic motifs. This is the Kosmonavtlar station, dedicated to cosmonauts and astronomers.

And together you with the cosmonaut I also greet you. See you in about three weeks for the last part of this journey.