Hello friends!! Here I’m again, for a very short trip to Cyprus, a week in which I managed to sneak between the Delta and Omicron… of this f*****g Covid.

The history of Cyprus is too long to be briefly summarized, having been conquered and influenced by all the great Mediterranean civilizations: Greeks, Assyrians, Egyptians, Persians, Romans, etc … but I want to briefly summarize the recent history that led to the division of the island in two parts.

After independence from the United Kingdom in 1960, strong tensions broke out between the Greeks and the Turkish minority (about 30%), mainly settled in the north. To limit the clashes, in 1964 the capital Nicosia was divided into two parts by a UN peacekeeping force, with a green pencil line (hence the name “Green line”) drawn on the map by an English general.
In the following years, however, a certain stabilization began to be reached, thanks to the presidency of Makarios who, although a Greek, was esteemed by the Turks, after an initial mistrust.
But in 1974 the colonels who came to power in Greece after a coup d’etat organized a coup also in Cyprus and removed Makarios (most likely instigated and financed by the United States which did not look favorably on him because of their usual paranoias… It seemed ugly not to meddle and mess up even in this small part of the globe!).
Since it was evident the intention of annexation with Greece shortly thereafter, and having been declared in the independence agreements that the annexation of Cyprus to Greece or Turkey was not allowed, Turkey felt entitled to intervene. After five days the Turkish army managed to land in the north and soon crushed the Greek army, advancing to the current borders.
The only good thing is that this humiliating military defeat against the Turks and the fear of a real war against Turkey had as consequence to bring down, after only a few days, the fascist regime of colonels that had been in power in Greece since 1967.
Once democracy was restored on the island, the Northern Turks never agreed to return to their previous status and proclaimed the Turkish Republic of Northern Cyprus, which is recognized only by Turkey.

At the moment a solution is not in sight, but year after year the tensions are gradually diminishing. Since 2003 it is possible to pass between the two parts of the island through checkpoints and generation after generation the old grudges are gradually forgotten. 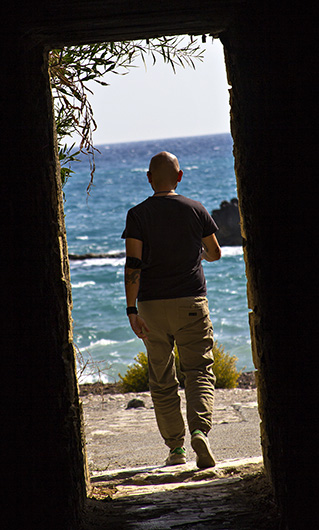 This time my travel companion is Alex, a dear friend in Malta, where we live. Like many Italian emigrants in Malta, we have both sold our souls to the devil, in fact, we work for online betting companies, but in my case I still have a clean conscience, being in the department that protects customers… but this is an argument that would go too far and anyway out of the topics of this blog.

At Paphos airport, we rented a Japanese automatic car with abstruse gear controls (prone to suck swearwords even to a quiet person like me) and we went to Nicosia, along the road that runs by the south sea. On the way, we stopped a few minutes on the “Aphrodite’s Rock” beach. 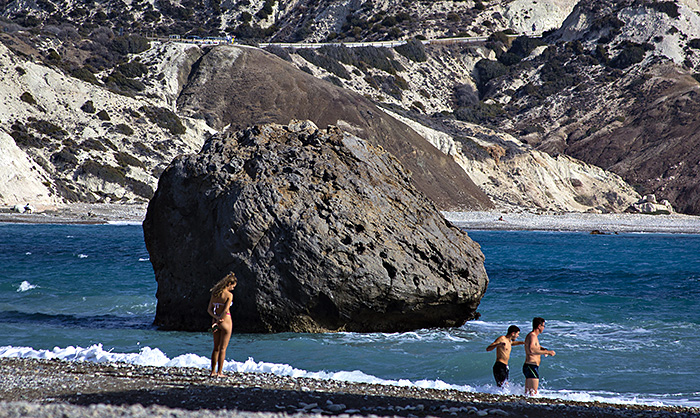 According to the legend recognized also outside Cyprus, it is here that, emerging from the foam of the waters, was born Aphrodite, the goddess of Love and Beauty. 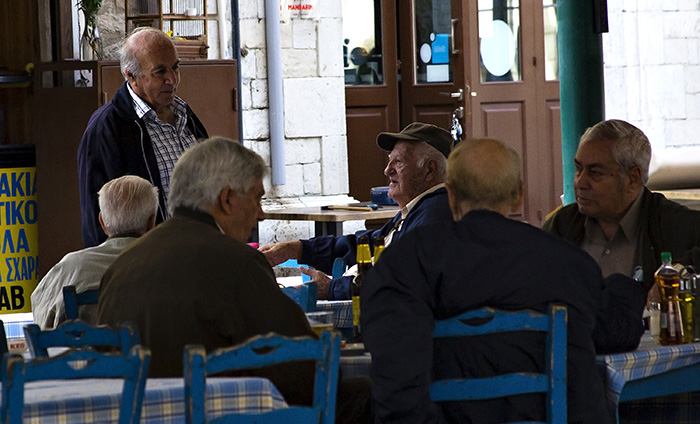 Elderly people in Nicosia, on the Greek side. 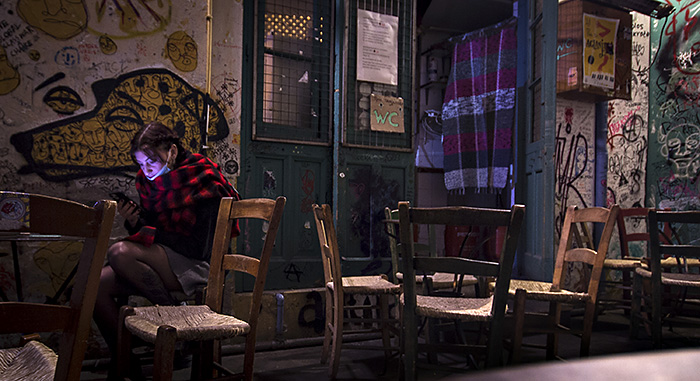 Cyprus is full of clubs of all kinds. However, many were closed or completely empty due to the mix of Covid and low season. Here we are in a pub in the Greek part of Nicosia. It was very punk aesthetically… a pity that the prices were like Grand Hotel. 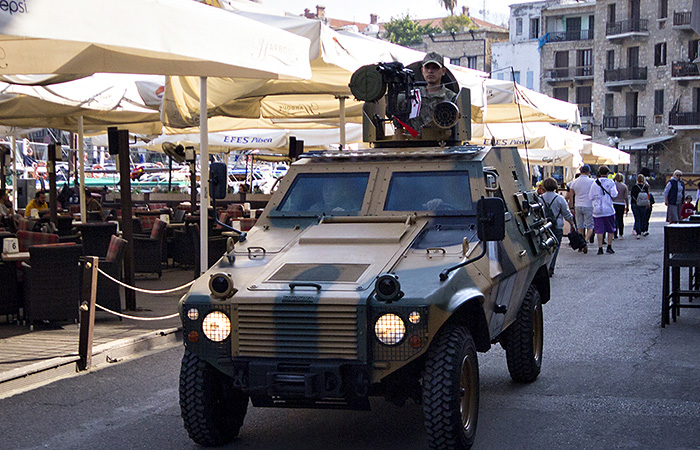 A military vehicle in Kyrenia, in the Northern Cyprus.
This photo, however, is misleading because in reality also the north is very quiet, it was perhaps a military parade. In fact, just before it, four F-16s had passed about 50 meters above our heads, with a frightening roar! Soon later we saw that it was an exhibition.
Kyrenia doesn’t differ much from cities in the south, apart from many flags of Turkey and the Turkish Republic of Northern Cyprus all around, and much lower prices. Unfortunately, little of the historical part remains, everything replaced by modern clubs, discos, casinos, and commercial chains. 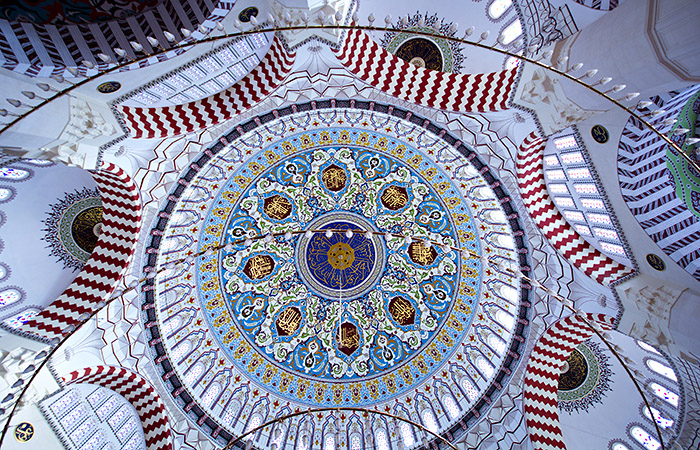 The ceiling of the recent great Hala Sultan mosque in Haspolat, built with generous Turkish funds. 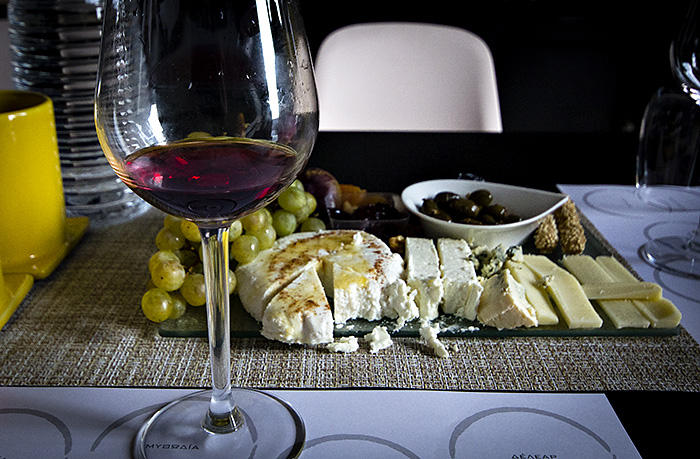 Back in the Greek part, in the mountains of Troodos, for one of the most pleasant experiences of the trip: the wine ​tasting in the cellars. The production of wine in Cyprus dates back to about 6000 years ago and according to some historians, it was the first place in the world to produce it.
During the tasting we were offered various types of wine, gradually increasing in gradation. Some were really good.
If the police had stopped us for the alcohol test, our driving license would have been suspended until 3485. 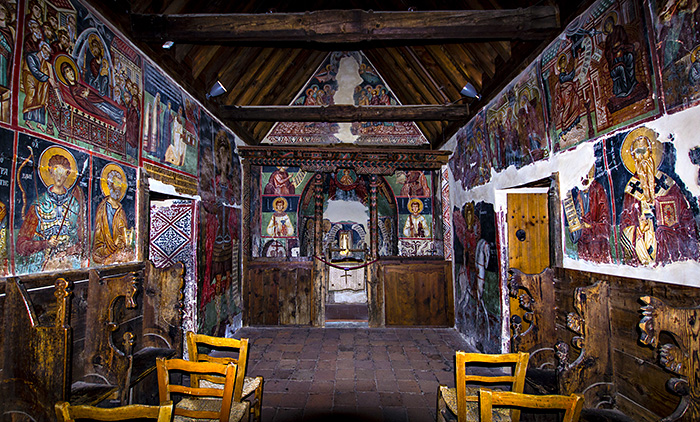 Hidden into the Troodos mountains there are Orthodox churches that are very humble on the outside but which hide splendid frescoes inside. In this case, it is the church of the Archangel Michael, in the village of Pedoulas. It was built and painted in 1474. 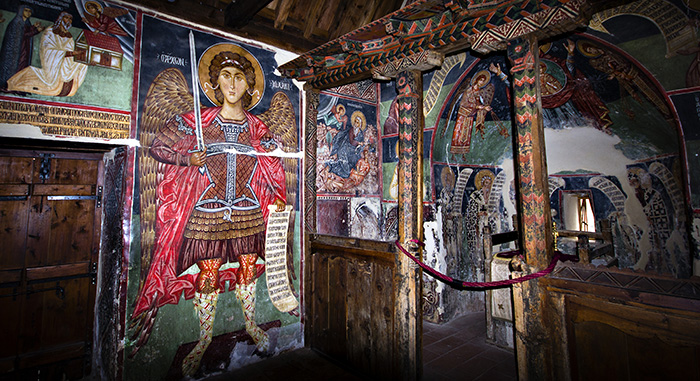 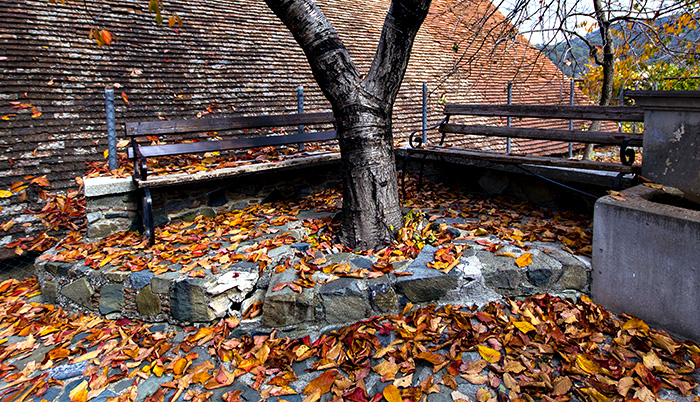 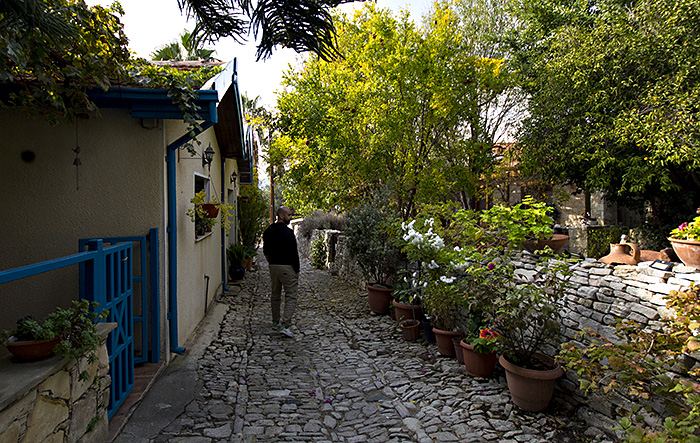 A cobbled street with plants and flowers in Laneia, a scenic little town in the Troodos’ mountains.
Yes, once again Alex can be just glimpsed from behind, but don’t worry, you won’t miss anything extraordinary, I mean, he is not a George Clooney, to use a euphemism. 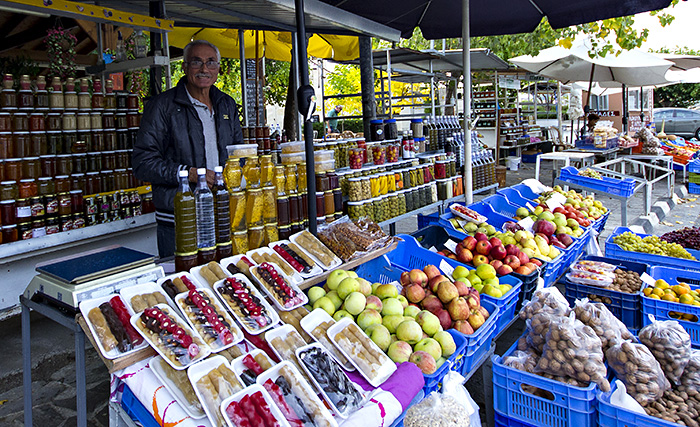 Food stall by the road. 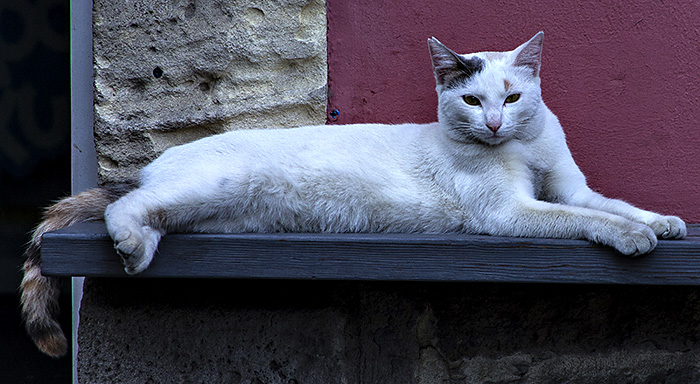 Cyprus is full of cats. A joy for all lovers of this cute feline. At the moment, the first proved friendship in the world between man and cat was discovered here, in a tomb dating 9500 years ago in which a cat was found buried next to the deceased.
Later there were also specific reasons that brought the cats to the island. For example, the story of the “Holy Monastery of St. Nicholas of the Cats” tells of how, during its construction in the thirteenth century, ships full of cats were brought from Egypt and Palestine to fight the poisonous snakes in the area.
Now the snakes have been defeated and the cats have successfully completed their task. They can therefore stay all the time lazing around and eating food kindly offered by Cypriots and tourists 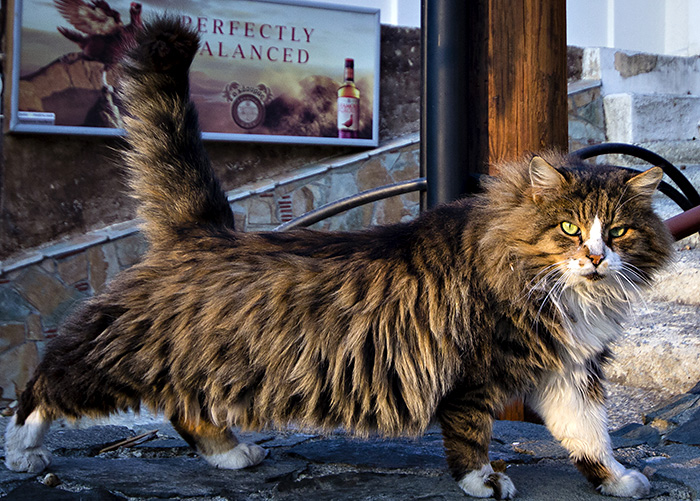 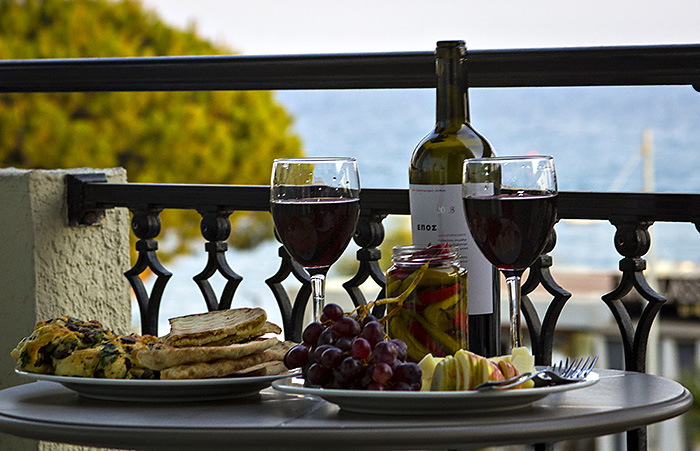 We keep drinking excellent Cypriot wine. Here we are in Limassol, a big and ancient city on the south coast. Here too, however, as in all the Cypriot cities I have visited, very little remains of the past. 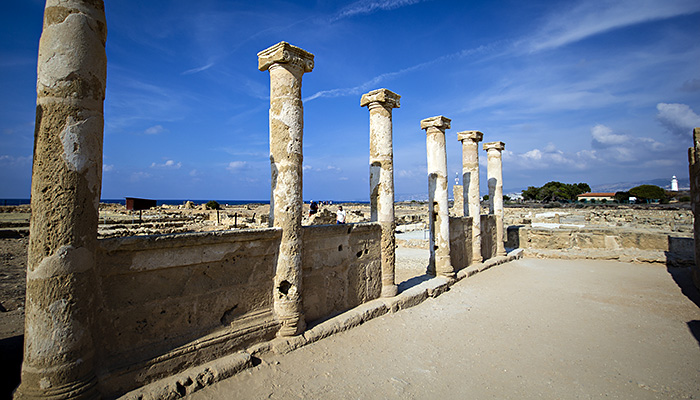 After the fourth day Alex returned to Malta (there was a compromise with his girlfriend, Ciapparina, who at first did not want to send him, but in the end allowed a maximum of 4 days) and in the remaining three days I visited some suggestive archaeological sites.
These are the ruins of the archaeological area of Neo-Paphos, founded in the 4th century BC. At the time it was the “new” city in the area. In fact, the city-state of Paphos is so ancient that is even mentioned in the Odyssey. 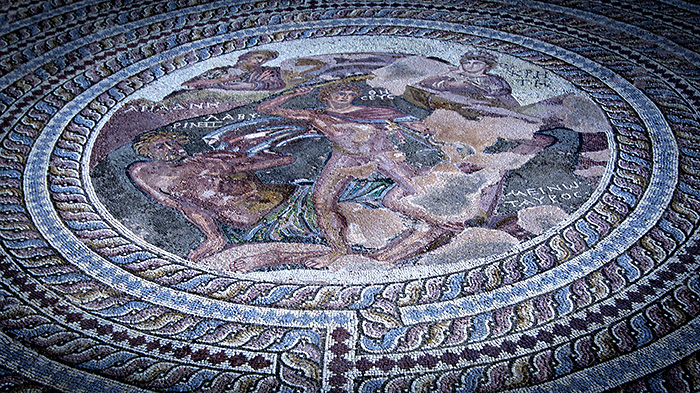 The site is also famous for the extraordinary mosaics on the floors of some Roman villas from the early centuries AD. Unfortunately though, perhaps because it was low season, they were covered to be preserved, except this one and another which depicted the birth of Achilles.
This mosaic depicts the mythical fight between Theseus and the Minotaur within the labyrinth of Crete. In the upper left there is Ariadne, in the upper right an impersonated Crete and in the lower left the labyrinth itself impersonated. 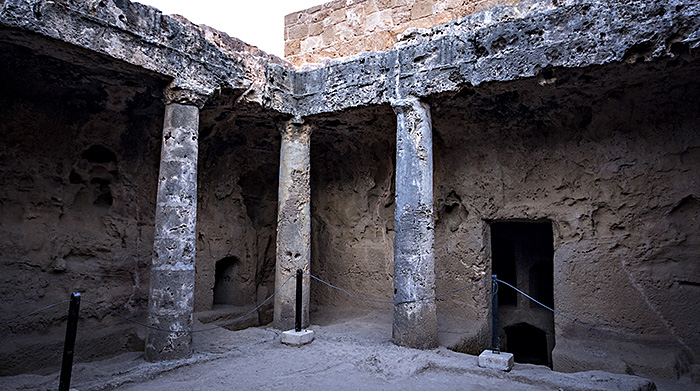 A little north of the archaeological area of Paphos there is a necropolis called “Tombs of the Kings”, dating back to the 4th century BC. There are no kings buried, it was actually used by the local aristocracy.
This tomb has a colonnaded atrium with niches around. 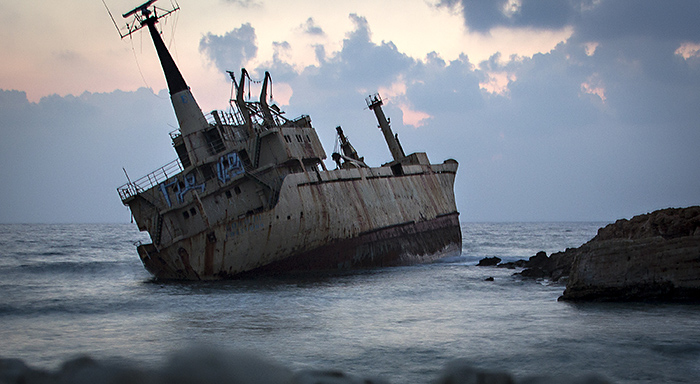 A cargo vessel that ran aground in 2011 in Peyia, 10k north of Paphos. 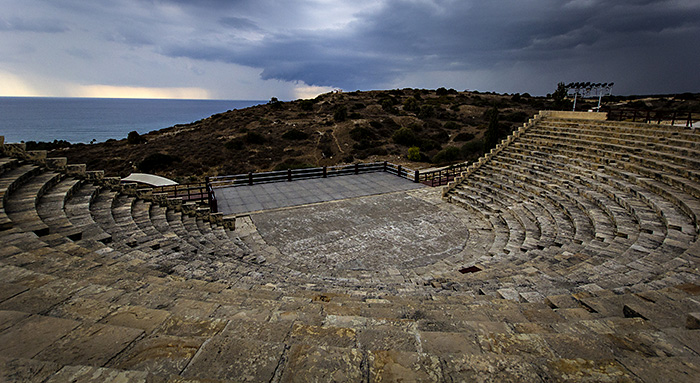 Another very ancient city is Kourion, near Limassol. This theater was actually almost completely rebuilt on the site of the original one. Kourion was an important city-state of Mycenaean colonizers who settled here in the 13th century BC. 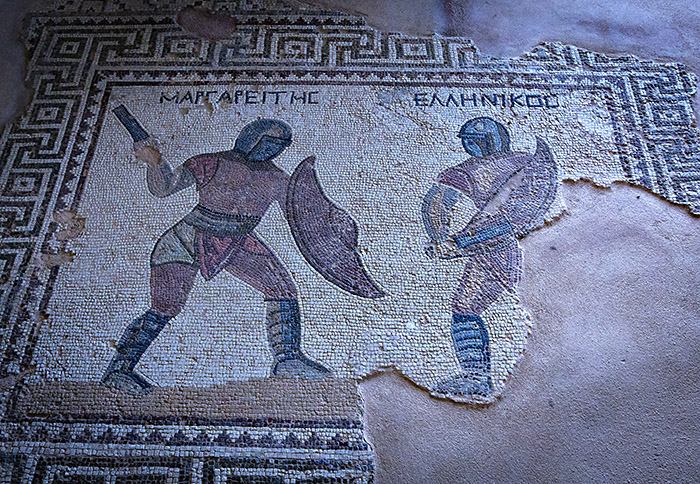 Also in Kourion there are mosaics on the floors of the villas from the Roman period. This is inside the so-called “House of the gladiators” due to two mosaics depicting gladiators. It was probably a gymnasium. 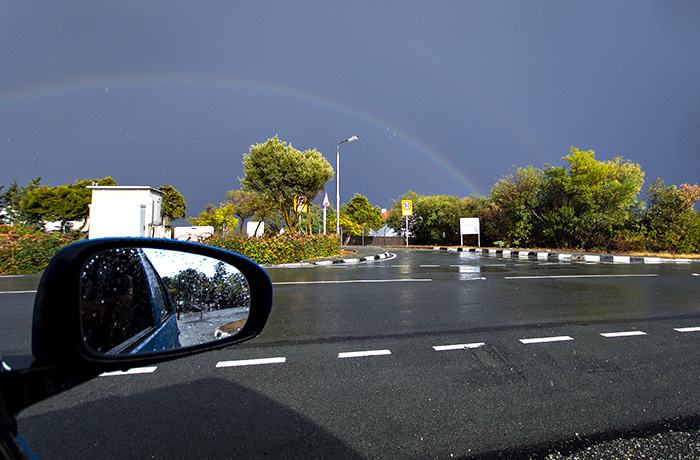 And once again the rainbow comes out on the road to greet me… a positive way to see the fact that it’s always raining!

Well, I was already planning another trip but the whole world is turning Covid-red again. Ok, patience. As someone wrote on Facebook: “Live each variant of your life as if it were last”