Hello friends! This time I tell you about Varanasi, the most sacred city of Hindus. It is also known as Kashi or Benares and is one of the oldest cities in the world.
Although it has been destroyed several times and almost all the visible buildings are no more than a few centuries old, millenary rites has survived, passed down until today. And indeed the magic of the city lies in this and it is certainly among the places that remain most impressed in the memory, even if at times you may find ourselves in situations a little disturbing, as for example when you walk by funeral pyres. It is also hard for a claustrophobic traffic with a perpetual horn sound.
The city overlooks the west bank of the Ganges through the so-called “ghats”, the steps that lead to the river. There are a total of 88 ghats and each has its own characteristic that makes it different from the others. 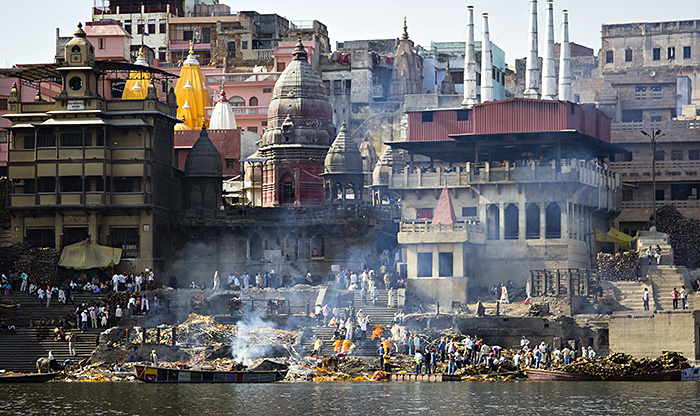 Let’s start with the more “disturbing” ghat , the one were there are the cremation pyres burning 24 hours a day.
For Hindus it is propitious to be cremated in Varanasi and for this reason many dead are brought here. Furthermore, it is believed that who dies in Varanasi obtains the “moksha”, the escape from cycle of rebirth, and for this reason many elderly people from all over India move to Varanasi waiting for death. 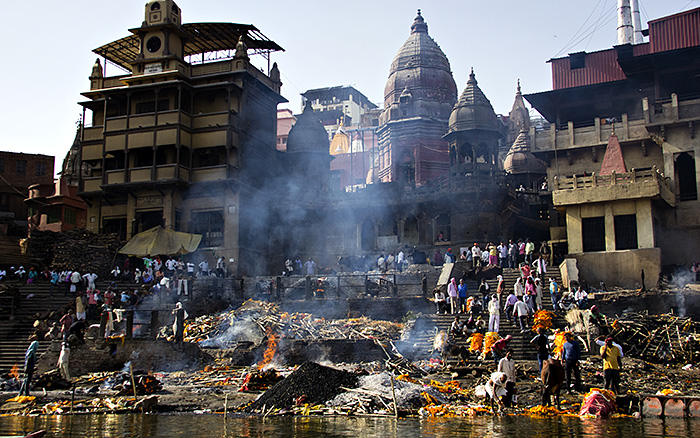 The Ghat is called Manikarnika and was among the first I visited, unintentionally. So I suddenly found myself between the pyres for cremation. From near you can clearly see the bodies so it was a little shocking. Other bodies waiting to be cremated are on the staircase, covered with garlands of orange flowers.
I couldn’t take pictures (unless I was giving a really high donation), but anyway I didn’t feel comfortable doing them. I did the photos later from a boat. 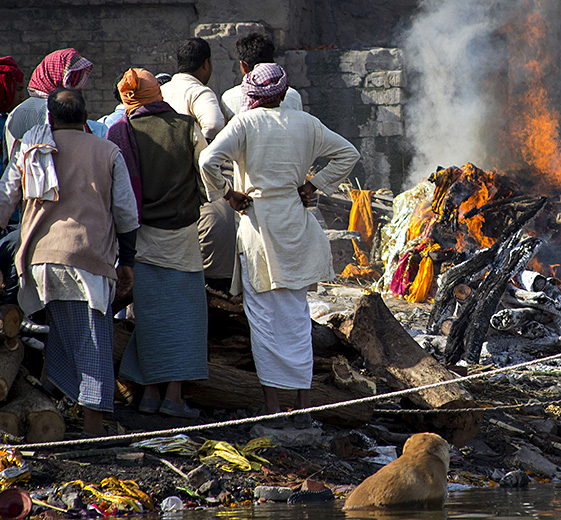 A pyre. I cut the right side of the picture because there was a part of the body and it was therefore a bit disturbing, other than perhaps disrespectful. 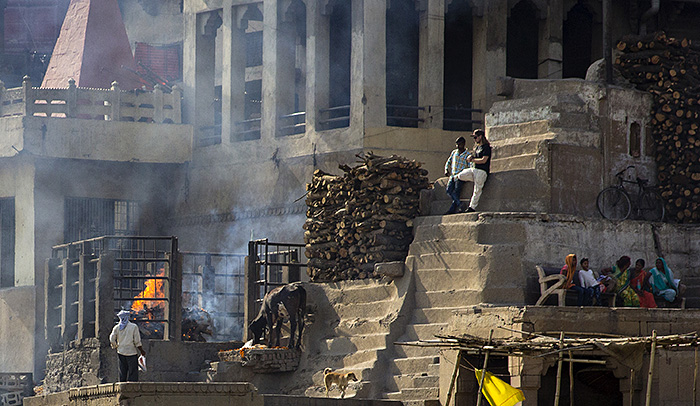 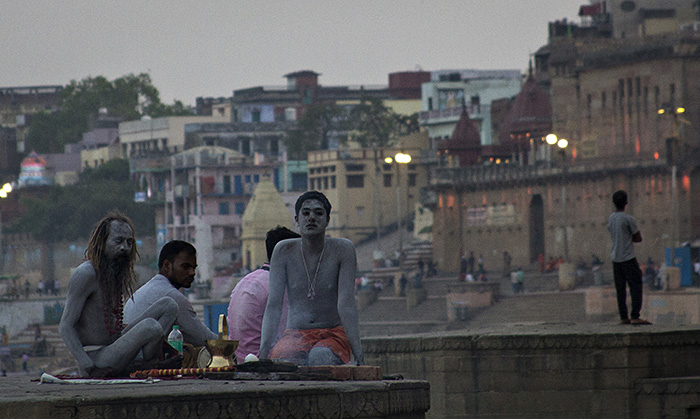 Varanasi is the city of Shiva, probably the oldest and most popular Hindu god. The members of some Shaivism sects go around naked or half-naked, covered only with a gray-blue ash. 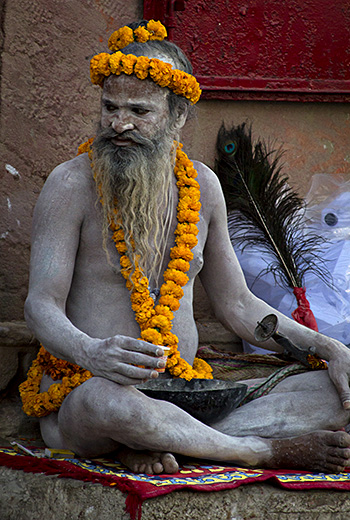 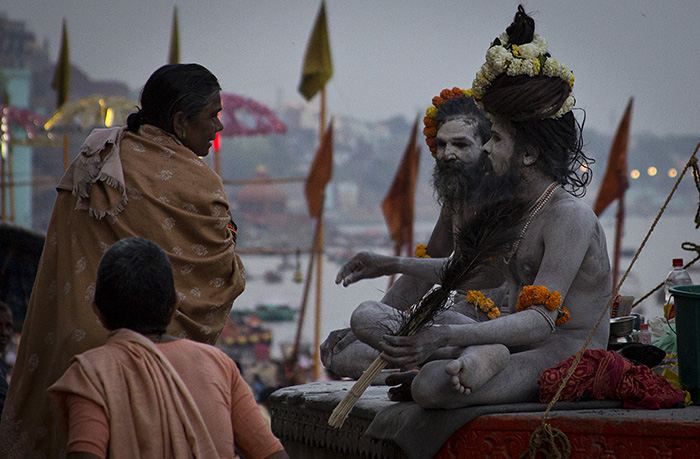 Sometimes they are completely naked. 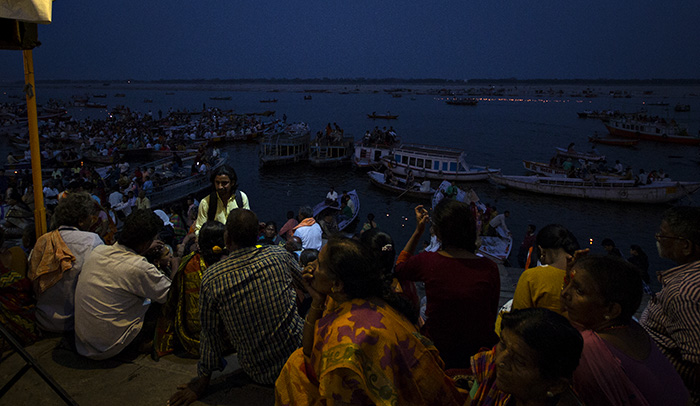 If in the rest of India sacredness can be felt everywhere and often you find ourselves in the middle of ceremonies or celebrations, in Varanasi it is practically daily life. The city has over 700 temples, but the most revered place is the river Ganges. Since the rising of the sun the believers go to the shore to pray and bathe in its waters, considered sacred. Every evening, after sunset, there are two ceremonies with fire, called Aarti, in honor of the river. And every time there is a big audience, also because Varanasi is a pilgrimage destination for Hindus, who feel the duty to visit it at least once in their life. 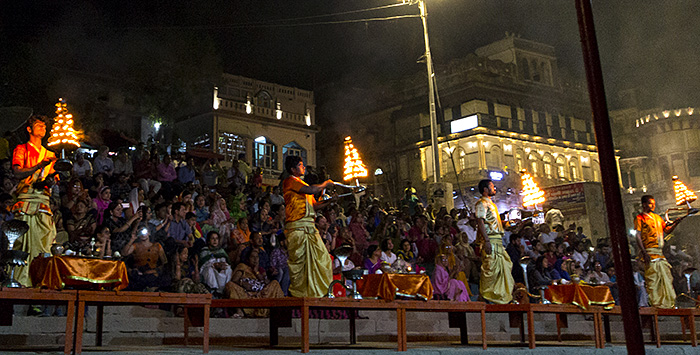 This is the aarti ceremony at the Assi Ghat, the last Ghat to the south.
After the ceremony we all went to greet “Mother Ganga”, some drinking its water, some (like also me) offering a little flame that floated away among other flames in the night. 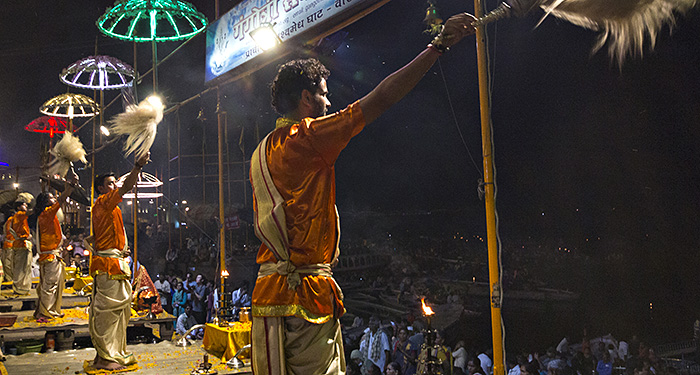 This is instead the cermony at Dashashwamedh Ghat, where there was a bigger audience, most of them on the boats in front of the ghat. 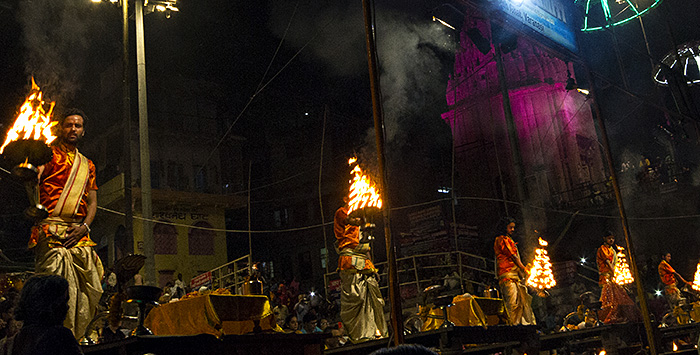 I loaded a short video on Youtube of this ceremony: Video of Aarti ceremony 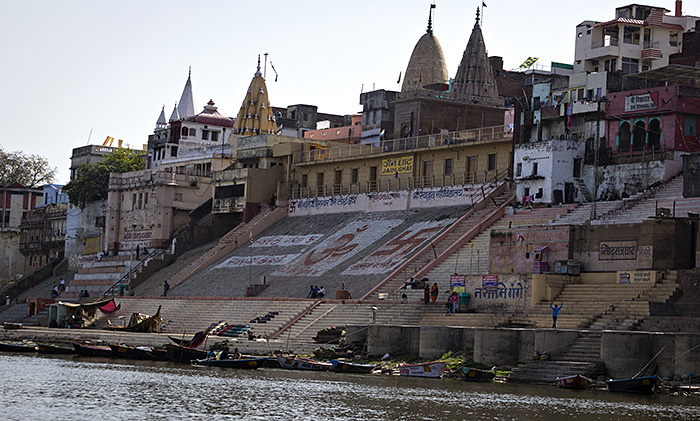 The Jain ghat, with the Jain symbol of the swastika. Varanasi is also one of the most sacred cities for Jainism. 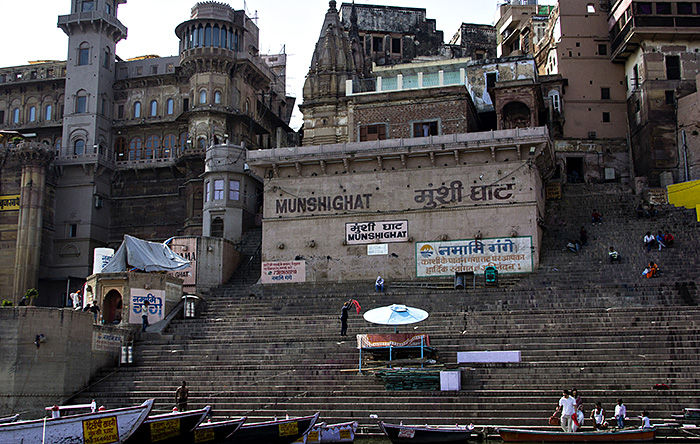 The Munshighat, where since few years that building on the left has been converted into a luxury hotel. 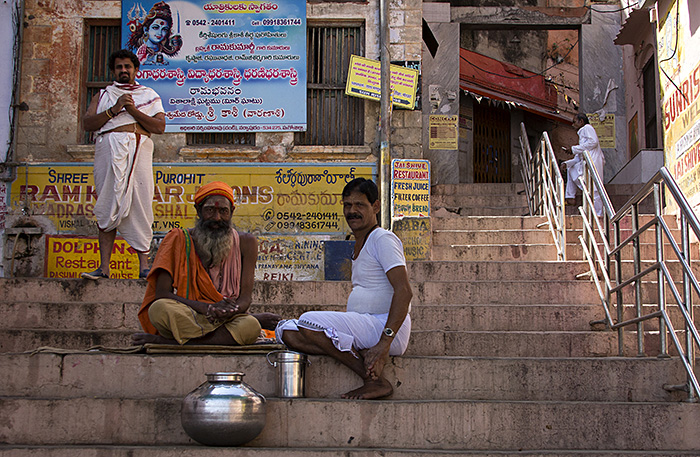 People on a ghat. 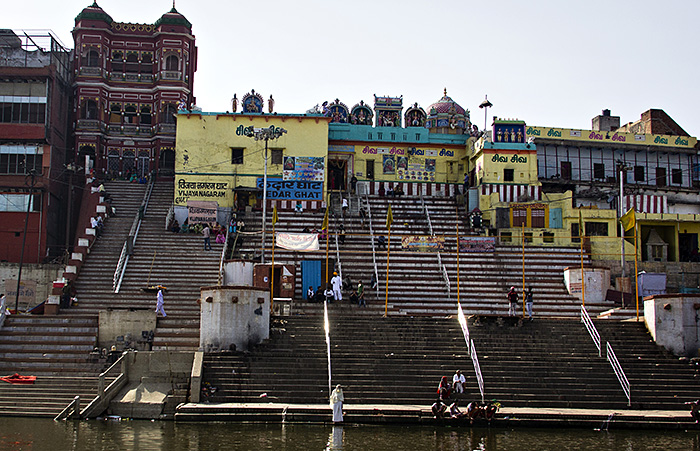 The Kedar ghat, on top of which is a Hindu temple. 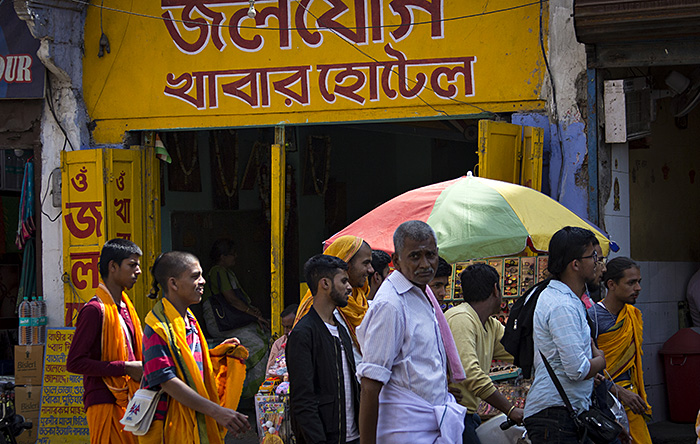 People walking. It is not easy to move around the city because there is always a lot of traffic and often even when walking you need to be in trafficated street. I uploaded another short video on Youtube that shows the traffic: Video Varanasi traffic. 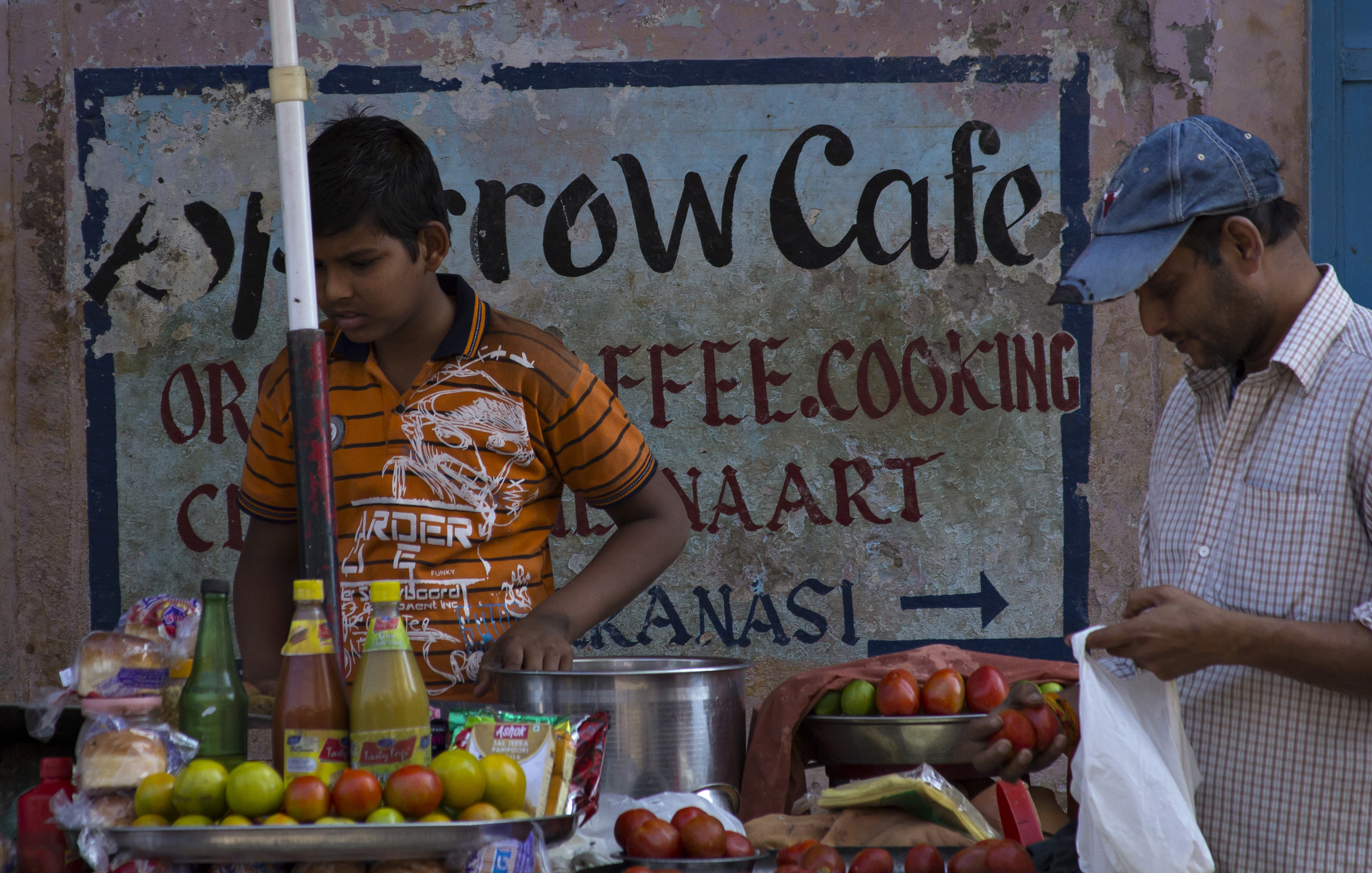 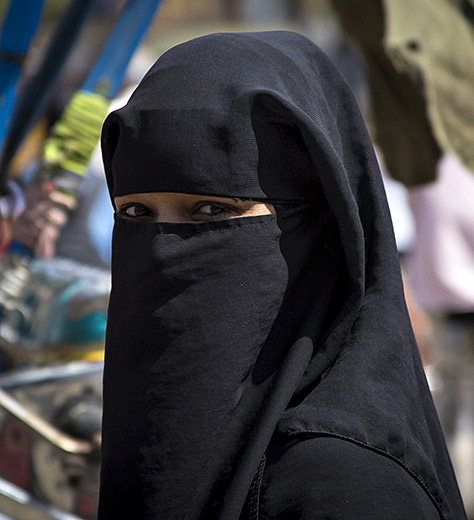 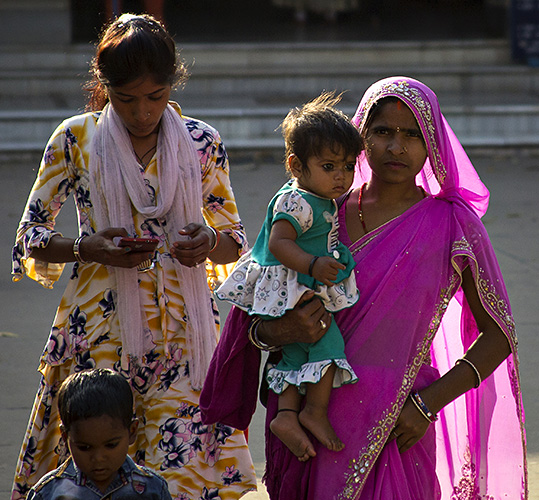 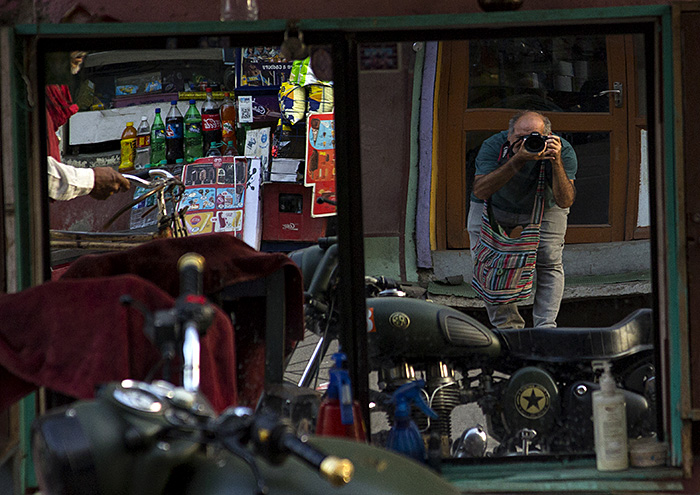 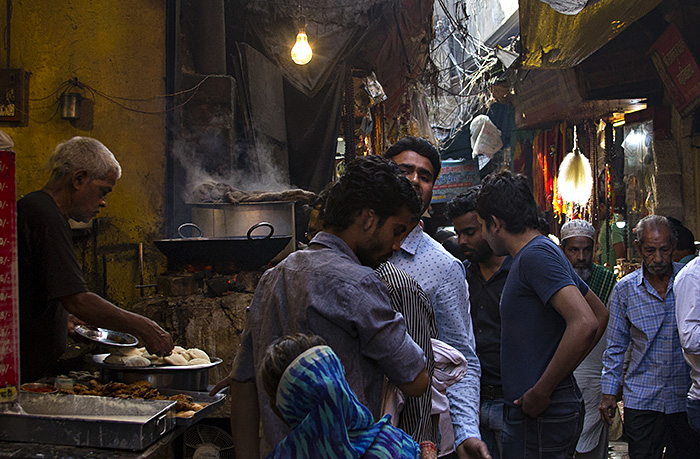 In the narrow streets of the old city. 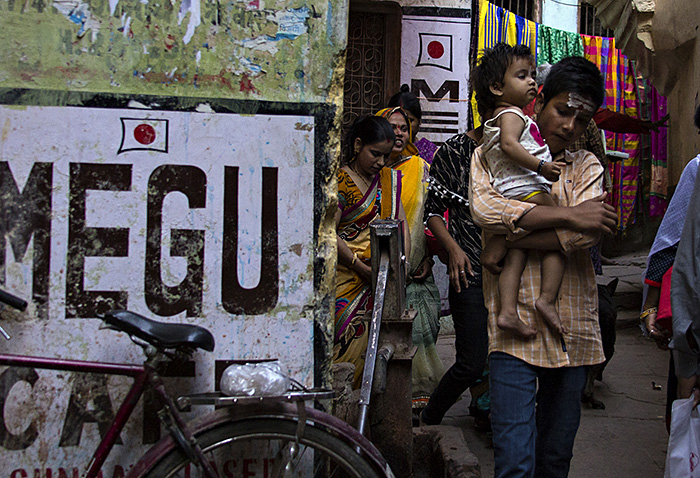 People in the old city. 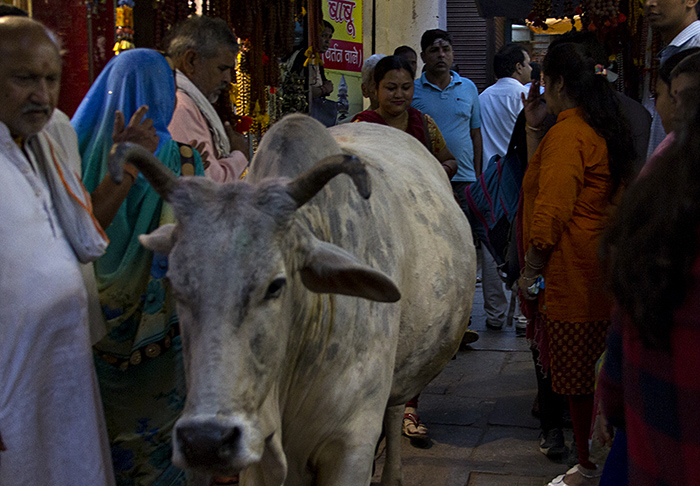 The typical cow that walks through Indian streets, in this case also narrow. 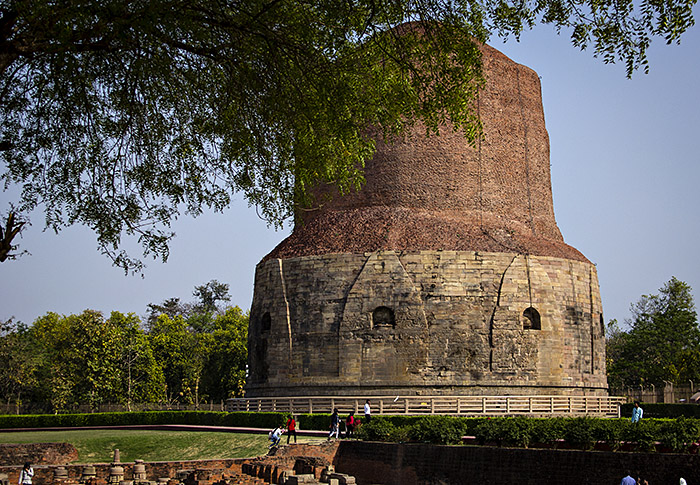 About ten kilometers from Varanasi, that is one of the most sacred places for Hindus and Jains, there is also one of the most sacred places for Buddhists: Sarnath . It is at the Sarnath deer park, where there is now that big stupa, that Buddha gave in 527 BC his first sermon to his five friends and followers, shortly after he reached enlightenment. That sutra is the basis of all Buddhist philosophy and explains the four noble truths, namely that there is pain, there is a reason why there is pain (that is the desire and attachment), it is possible to overcome pain eliminating desire and attachment and finally how to do it (with the noble eightfold path).
Already a few centuries after the death of Buddha this place became very important, with several Buddhist monasteries and temples of which only ruins remain today. It is here that was found the capital with the four lions that became the symbol of India. 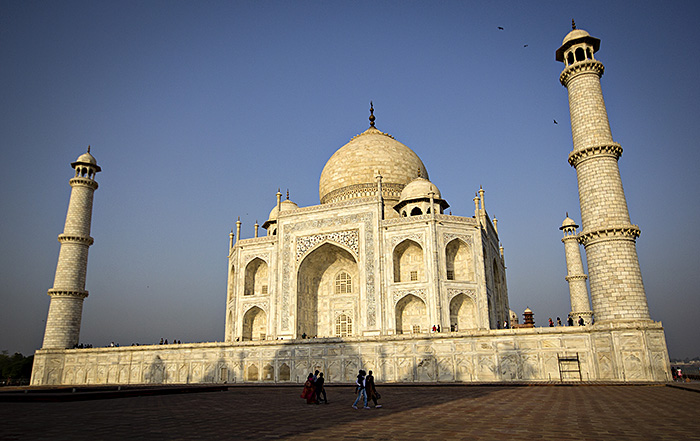 And finally, you have recognized it, the Taj Mahal in Agra. I had already visited it twenty-three years ago… ehhh time passes!
One of the greatest architectural masterpieces in the world, it is a marble mausoleum built between 1632 and 1653 at the request of the Mughal Shah Jahan for his beloved Persian wife Mumtaz Mahal, who died in childbirth. About 20,000 people worked on its construction. 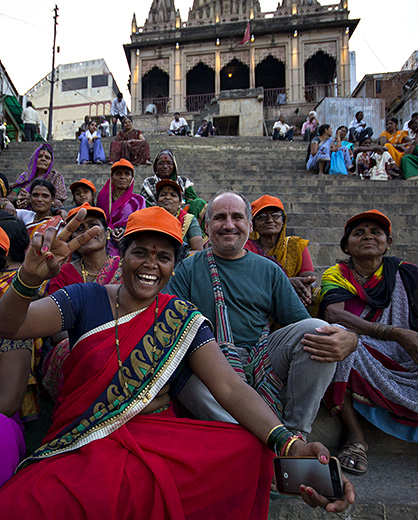 There are other photos of the Taj Mahal and of Delhi, where I am now, but I stop here. Cheers from the Indian subcontinent and see you in two or three weeks for something completely different…