Dear friends, be happy: here is a new episode of Dekaro Diary! This time I’ll talk about Mompos, Medellin, and Pablo Escobar, one of the most famous drug dealers of all time, head of the Medellin cartel. I also personally met his nephew, Nicolas. 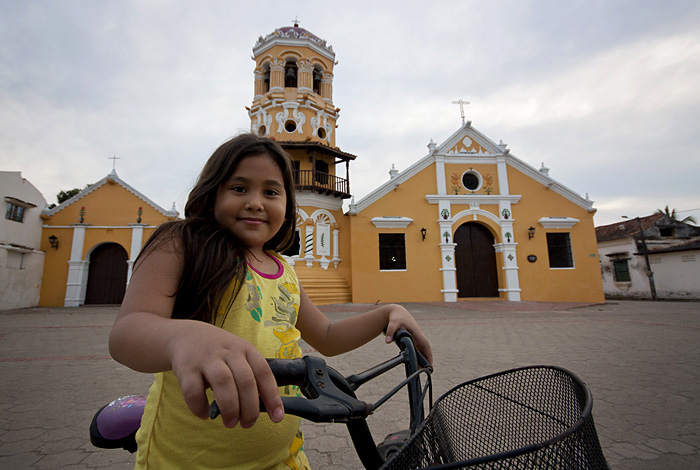 More or less halfway between Cartagena and Medellin, there is Mompos , a city that, like Villa de Leyva, seems to have stopped in time. This is probably because it was always a bit isolated. In fact, it is difficult to reach, and, at some point, there is also a stretch of river to travel by speedboat. 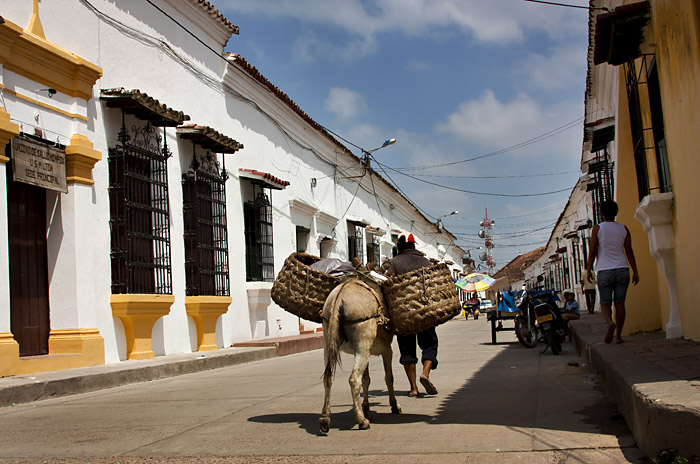 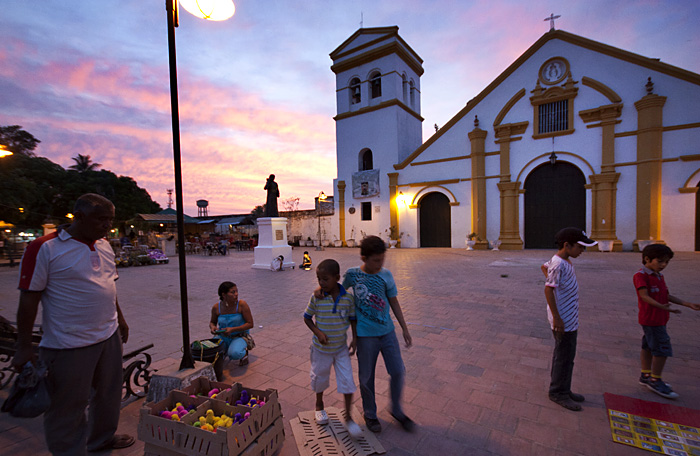 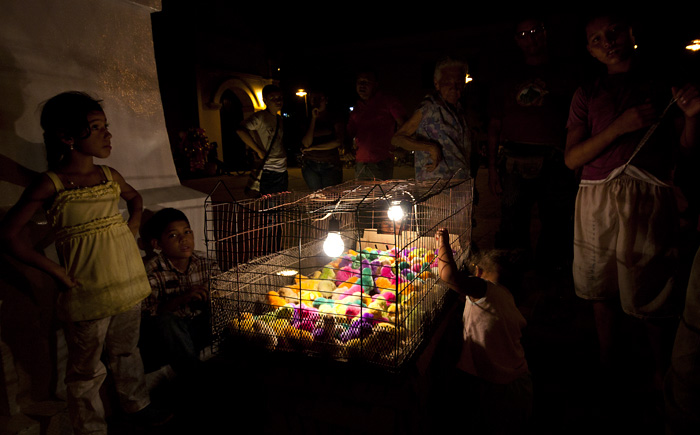 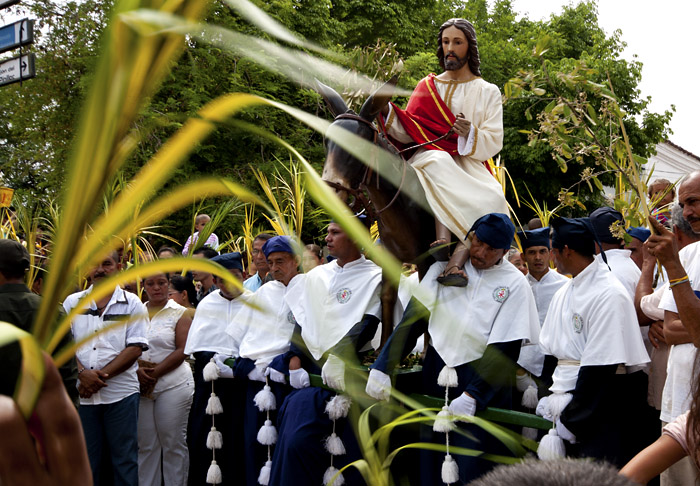 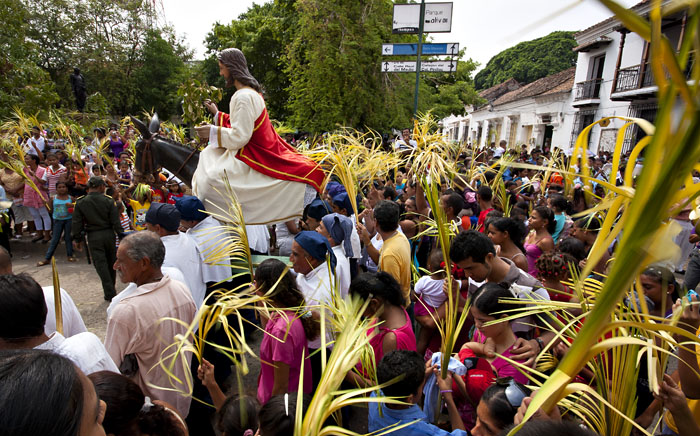 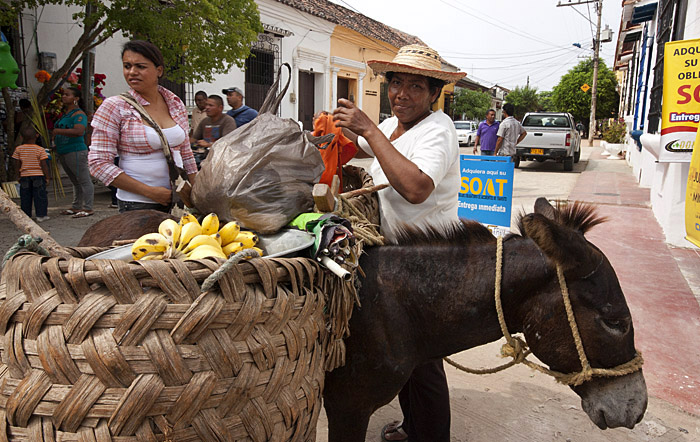 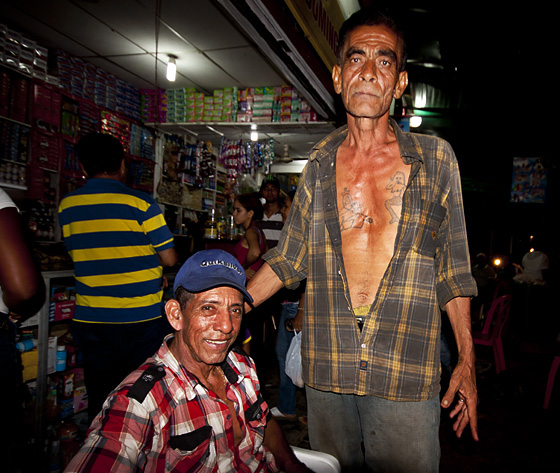 One night, in bars around a square, I met Javier, left, with whom I had a few beers. Then I met this gentleman on the right, a bit weird. 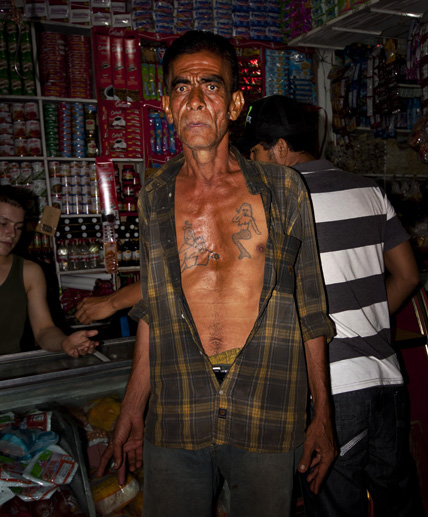 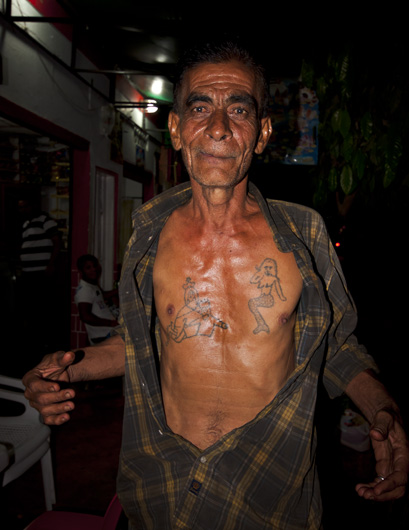 But basically graceful, here is even trying to smile! 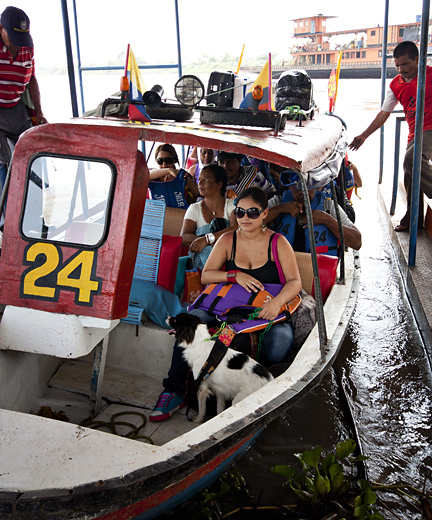 The speedboat to cover the stretch of river from Magangué in Bodega. 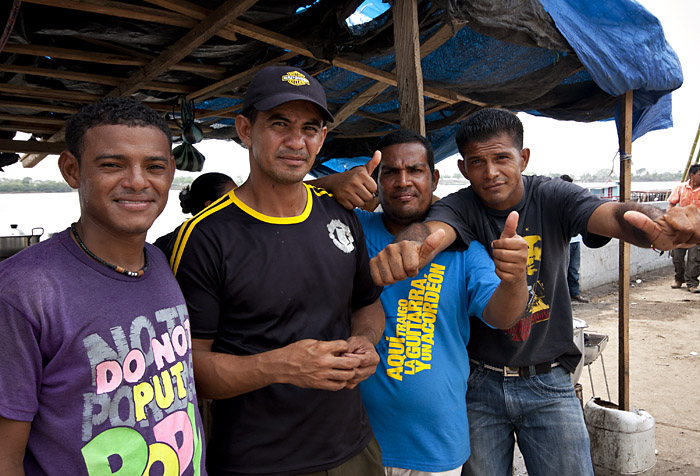 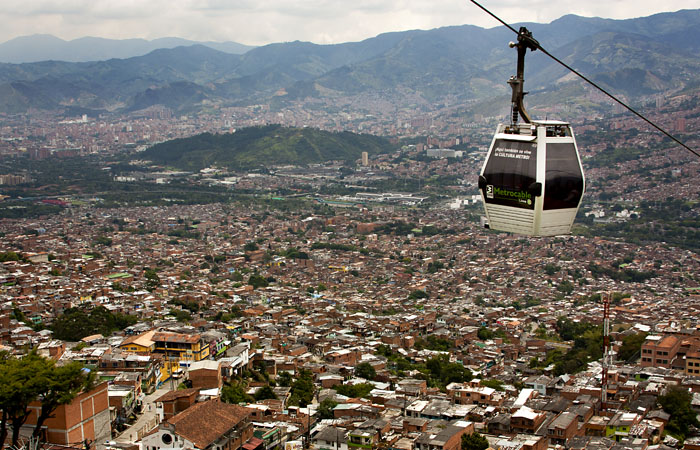 Medellin is located in a valley surrounded by hills full of houses. Arriving at night, it feels like being wrapped in hundreds of thousands of tiny lights.
From a metro station, there is a cableway that goes up one of these hills. 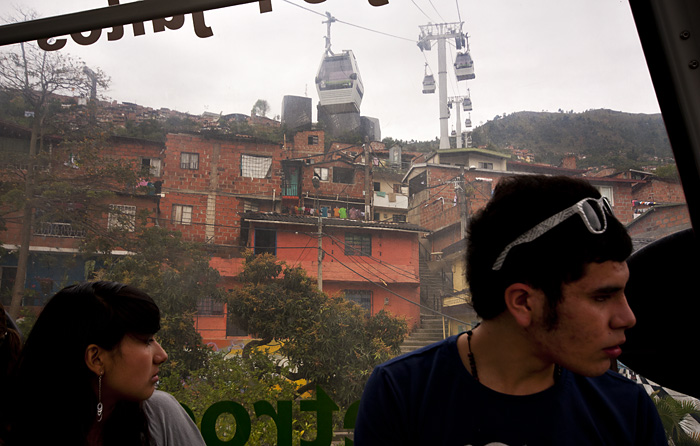 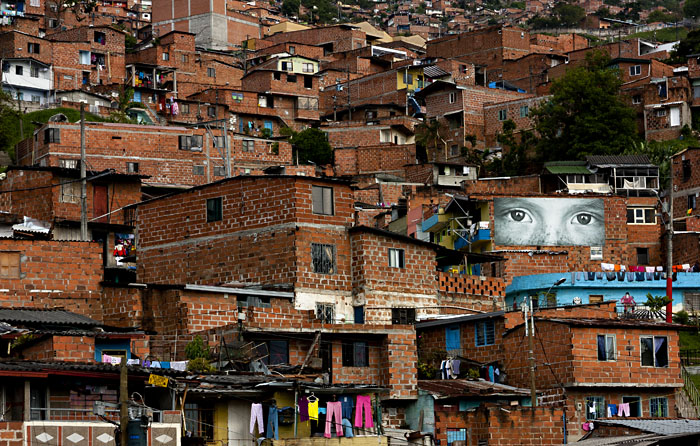 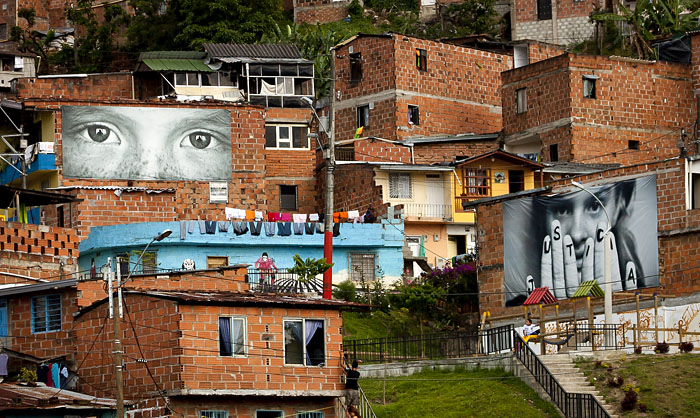 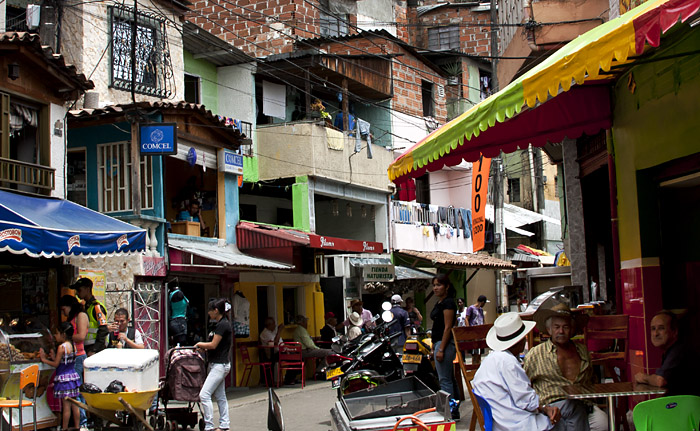 In the little streets. 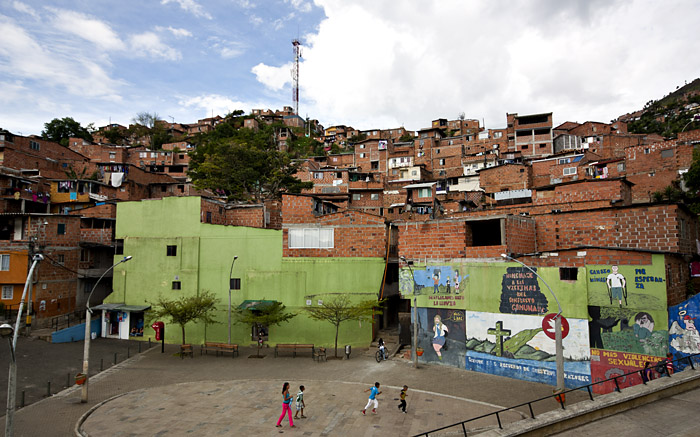 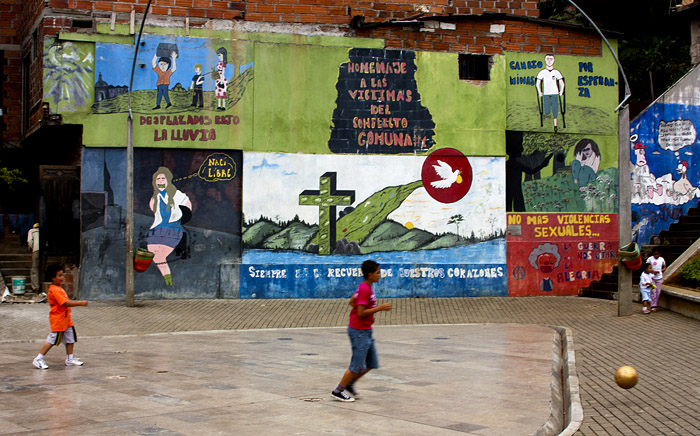 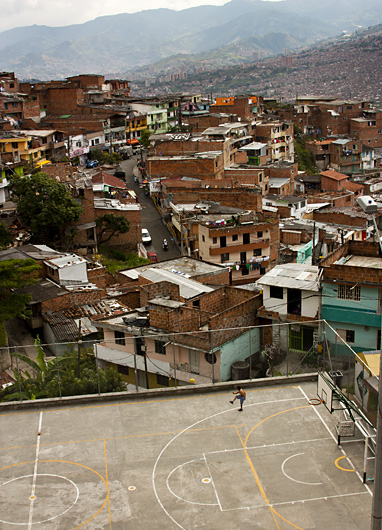 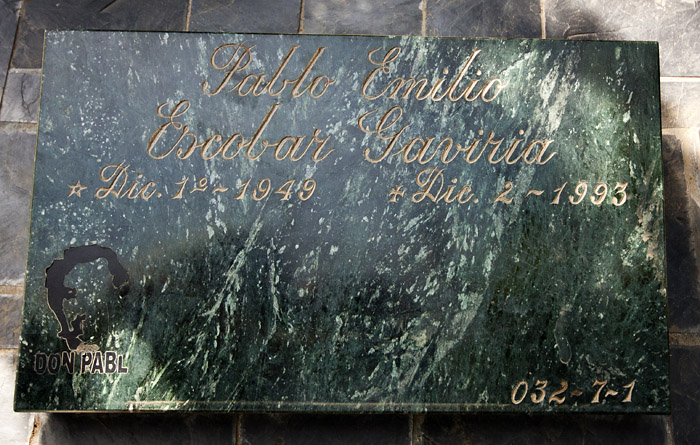 In Medellin, to my astonishment, I found the existence of the “Pablo Escobar Tour”, a tour of the sites linked to the history of Escobar. It concludes at his house, where it’s possible to meet his brother or his nephew.
We visited various places, including his tomb.

I give you a very quick summary of his tragic life because, in addition to fascinating, it’s an integral part of Colombian history.
When he was still a small drug dealer in South America, he was the first to export cocaine to the U.S. in the 70s, when this drug, although already classified as illegal, was virtually ignored by the police and the security of airports.
In a few years, he becomes the 7th richest man in the world, giving, in the meanwhile, a good chunk of his earnings to the poor, especially in Medellin, building hospitals, schools, and entire districts where homeless families went to live.
For this reason, becomes loved by the poorer classes , namely the vast majority of Colombians, and decides to enter politics, even to gain parliamentary privileges.
He is then elected in Colombian Congress, but soon after expelled under pressure from the Minister of Justice. From this moment, the war between him and the state gets rough. He kills the minister of justice and gives a bounty of $ 1000 for every policeman killed. The policemen, of course, leave Medellin that becomes the most dangerous city in the world. In the meantime, it also started the war with the Cali cartel. The dead, including many innocent victims, are thousands.
Increasingly cornered, Escobar accepts to get arrested, but on the condition that the constitution is changed to prevent the extradition of Colombians because he does not want to end up in the U.S. When he gets it, he goes to a prison built by himself: the Catedral, one of the most luxurious places on Earth.
But when the government, perhaps under pressure from the U.S., decides to transfer him to another prison, Escobar escapes.
On December 2, 1993, the day after his forty-fourth birthday, he is found and killed on a rooftop in Medellin. 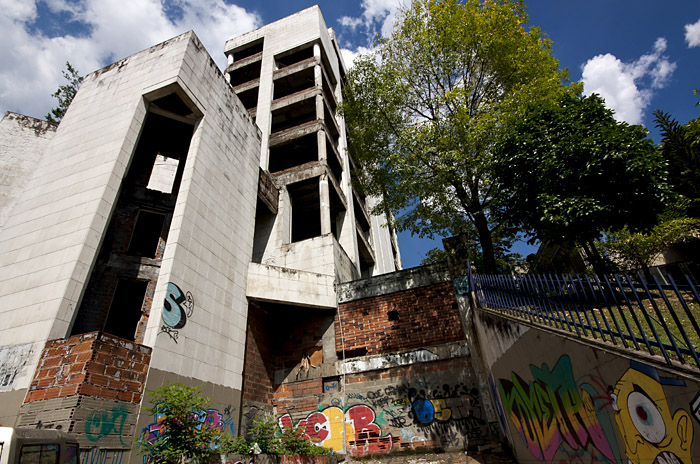 The headquarters of the Medellin cartel. After been confiscated, it was blown up by the rival Cali cartel, known as “Los Pepes”. 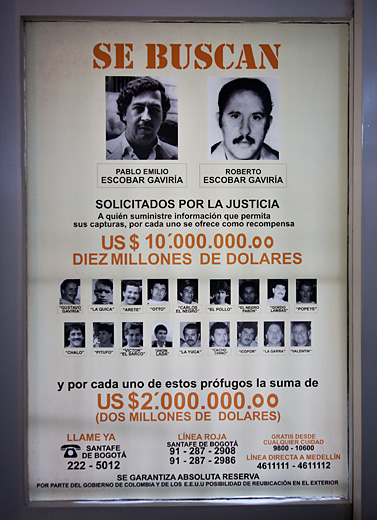 “Wanted” manifest with his brother Roberto. It is inside the house where he lived in the early ’80s, before moving to a country estate about 4 hours from Medellin, called “Napoles”.
It is now the house of Robert and his son Nicolas, nephew of Pablo, and is a sort of museum. 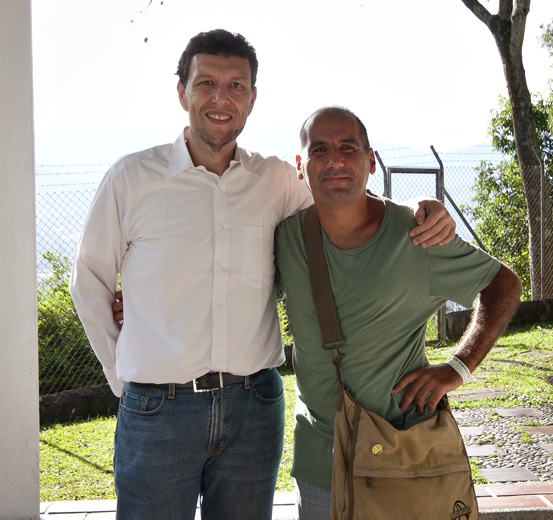 The tour itself was not exceptional, but it was fascinating to meet Nicolas, an educated and intelligent person.

He said that 90% of the things we are told about Pablo Escobar are false.

He said that regarding the death of his uncle, no one knows the truth apart from him, his father, and a third person. As soon as this third person dies (and Nicolas hopes soon), he will tell about it. He apologized for not saying more about it, but apart from this, he responded fully to all questions, always with great sincerity and dignity, using “we” even for the bloodiest actions of the Medellin cartel, such as the murder of the minister of justice.

He noted that the war waged by politicians against his uncle never had anything to do with moral issues because the Colombian politicians have never thought in those terms. The problem was political: Escobar was the first person coming from a poor family to challenge the power hold since ever by just five Colombian families. Also, instead of just promising, as all politicians do, he was really helping people, which is a fact.

About the United States, he said that the real problem for them is not so much the harmfulness of cocaine, but the flow of money going from there to Colombia to be stopped. It reminded me of Chomsky when he said that many more Colombians die every year because of U.S. tobacco than Americans because of Colombian cocaine.

Looking back at his past, he still feels a great love for his uncle, described as a brilliant person, always ready to help the poor. However, he realizes that despite all the money he had at those times, it was not a good life. He could hardly move around, and when he did, he had to be escorted and armed to the teeth. Now he finds himself with 75% of his family and 99% of his friends killed. Even the three years in a hotel in Switzerland for $ 55,000 a day, in the early 80s, are reminded more like a senseless folly than something pleasant.

He told many interesting stories of life with his uncle:
Pablo one day decided to learn French for business reasons, and after only 3 months he was able to speak fluently in French to Nicolas that, after years in Switzerland with the best professors, still couldn’t!
The surreal luxury of the Catedral, the prison that Pablo self-built for himself, where almost every night there were parties, and sometimes even football matches with entire professional teams inside.
The increasingly complex ways and means to bring the drugs in the U.S. At the beginning with small planes, after with ships, and now the Cali cartel mainly using submarines.
The many international airports that made them pass through without controls in exchange for 25% of the value of the carried drugs… and so on.

Nicolas was arrested only once with a friend, immediately torn to pieces with a chainsaw by Colombian police in front of his eyes. Fortunately for him, in the meantime, uncle Pablo knew of the arrest and personally called the president of Colombia, saying that this was a war between them and if they began to put in relatives, then he would start to kill the sons and the nephews of all highest military and political men. Twenty-five minutes after the call, Nicolas was free again.

After the death of Pablo, the family decided to stop. Now the drug trade is controlled mainly by the Cali cartel, their eternal rival.

One last curiosity. The war between the Medellin Cartel and the Cali also moved on the football field, with Independiente Medellin against America of Cali. And when the Cali drew a game thanks to a somewhat suspicious refereeing, Escobar killed the referee! The hidden dream of every football supporter!

A big hug to the many new friends of the Facebook page of Dekaro Diary!