Hello Friends! I’m back. This time I will write of a 3-week journey in the “Windward Islands” of the Lesser Antilles. Namely: Barbados, Saint Vincent & the Grenadines, Saint Lucia, Martinique and Dominica.

I divide it in two different posts, this time you will see Barbados and St. Vincent & the Grenadines and in a few days the other three islands. I put the Map of the Caribbean Sea (from www.arcgis.com/), so you can see where exactly are the islands: 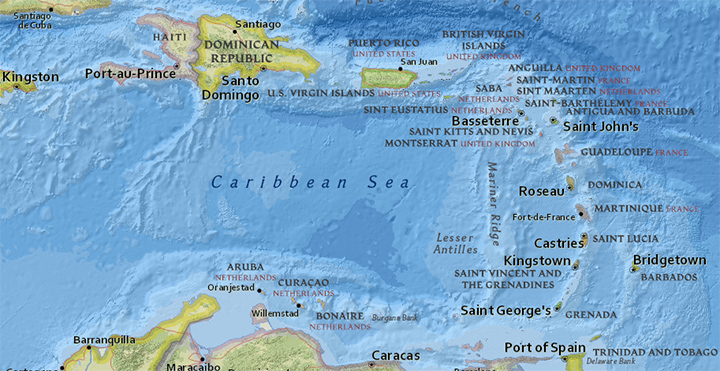 So, the Lesser Antilles are those forming as an arc to the east, toward the Atlantic. The first island I visited was Barbados, the easternmost. From there I went to the archipelago of St. Vincent and the Grenadines and up to Dominica (not Dominican Republic) passing by Saint Lucia and Martinique.

Despite the proximity, each island-nation has its own story, and also from the naturalistic point of view are quite different.

Originally these islands were inhabited by the Arawak. At the turn of the first and second millennium the Caribs replaced them almost completely, making them flee towards north-west. The indigenous were later decimated or completely annihilated by the barbarian European invaders, which anyway for about a century after their arrival did not take in great consideration these islands, being more interested in places with precious metals.

In the 1600s it was instead realized their potential as ideal locations for plantations, especially sugar. They went then under the domination of the European powers, especially Britain and France, with islands bouncing several times under the control of one or the other as a result of battles on site or wars and treaties in the Old Continent. As workforce were brought slaves from Africa. 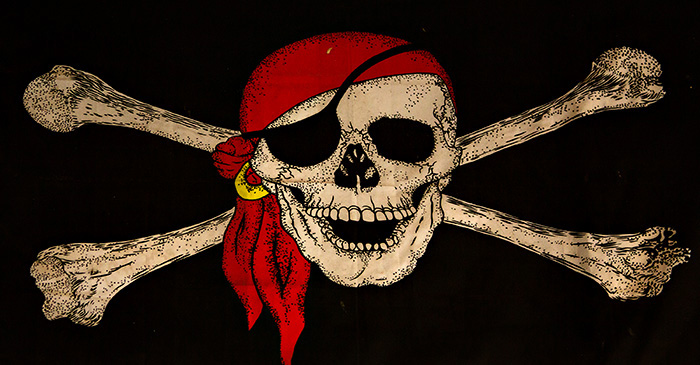 The history of these islands is also linked to the Piracy in the Caribbean , which developed during the 1600s, when the Spanish had a monopoly on trade with their own colonies in the New World. Being on the route of the Spanish ships returning to Spain from Panama, and being full of bays and coves to hide and escape, were the perfect place for pirates.

The pirates were mostly former British, French and Dutch sailors who escaped in this tropical paradise by the terrible living conditions on their ships and the economic hardship on earth.
Since in the Old Continent their nations were often at war with the Spaniards, they were at beginning tolerated or appreciated at homeland, if not authorized, as the corsairs, that had a “lettre de course” to loot legally. But when even British, French and Dutch developed business interests in these areas, the pirates had no longer any support. So, they became pirates in the real sense, against the whole world.
They began to expand in West Africa, in Madagascar, in the Indian Ocean. In 1700, off of Cape Verde, in Africa, is reported for the first time a pirate flag, the Jolly Roger, which will become a symbol of identity for this sort of trans-national libertarian community.

In 1720, in the heyday, there are about 2,000 pirates who roam the seas of the world, but soon they could not compete with the chilling monotone efficiency of the rising State-nations. In 1723 the pirates are already reduced to a thousand. A few years later are less than two hundred and almost all of the famous pirate captains have been killed in battle or hanged.
A fate well known to the pirates, who were aware were channeled into a dead end. And in fact, more than battles and loots, the undeniable charm of the pirates, then as now, comes from this extreme quest for freedom, from the extraordinary courage of the choice to escape from narrow economic and moral impositions toward the drift of a rebellious and self-destructive existence that mocked all authority, all conventions, and even death. 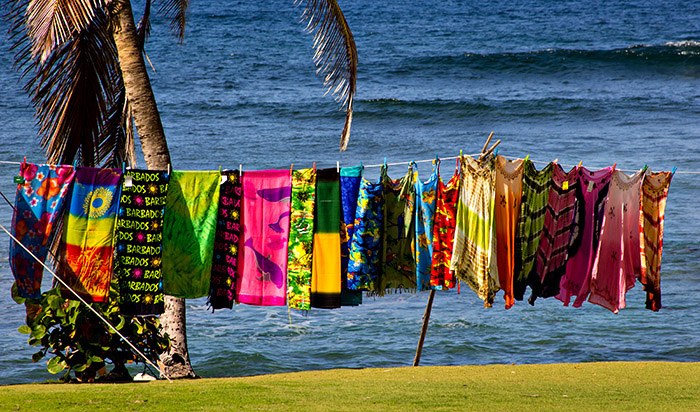 First stop: Barbados, the easternmost island, and for this reason more isolated respect to the others. It is almost 35 km in length and 23 km in width. All around the island runs almost uninterrupted a belt of amazing beaches. The beaches on the east side, toward the Atlantic, are wildest, with a dark blue sea and big waves, popular with surfers. On the south-western side, by the Caribbean Sea, the beaches are white and idyllic, with the classic turquoise Caribbean sea.

It was occupied by the British in 1625, and at time, unlike the neighbor islands, there were already not residual populations of indigenous Amerindian people, the few survivors of the incredible ferocity of Europeans had probably escaped elsewhere.
In a few decades the forest that covered the entire island was destroyed to make way for plantations, especially sugar. In recent decades however, as global demand for sugar has declined, the forest is reforming again in the inland areas.
The plantation workers were slaves from West Africa. The integration between the white and black population came fairly quickly, even before the abolition of slavery, thanks especially to several parish schools that from the 1780′s on were accepting the children of the slaves. Already in the first decade of 1800s there were mixed schools, unlike for example the United States, where racial segregation in schools was outlawed only in 1954 (but, you know, that is the country of freedom).
It became independent from the United Kingdom in 1966. 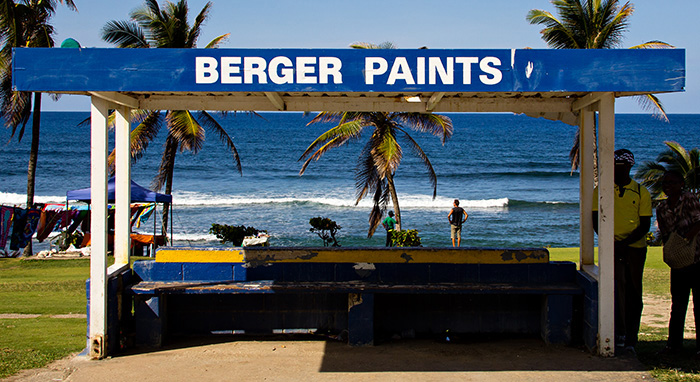 As you can see, the bus stops don’t need panels with pictures of palm trees and the sea, such as the ones used to relieve depression in our gray metropolis. They can just leave empty. 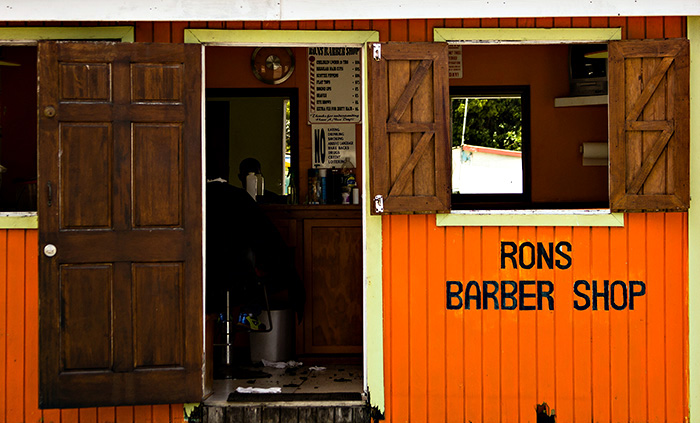 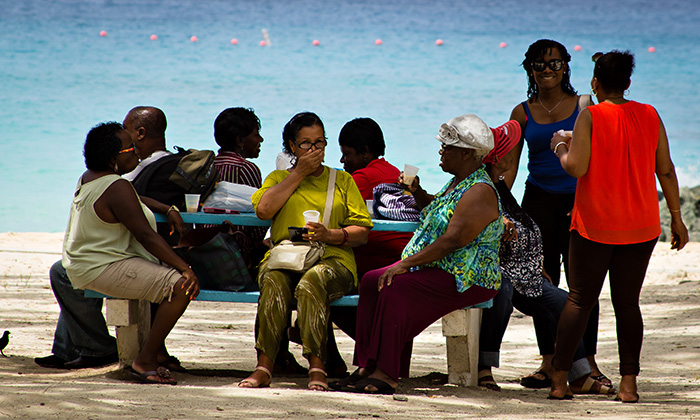 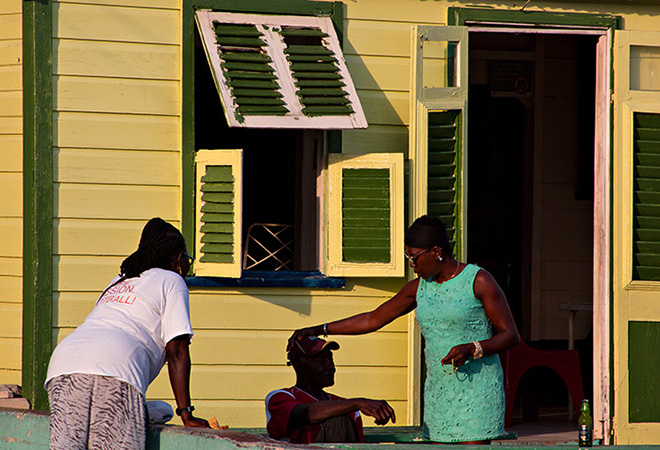 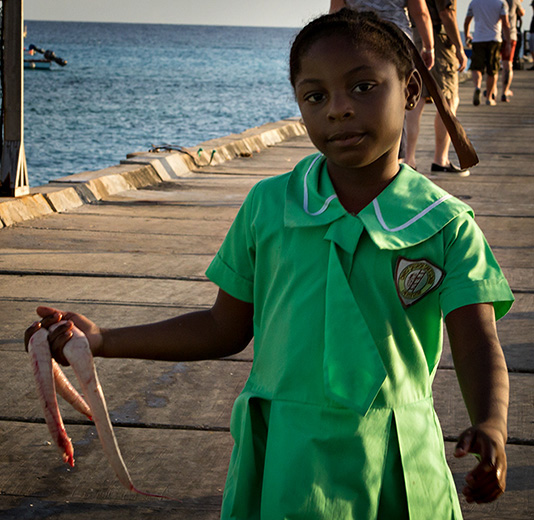 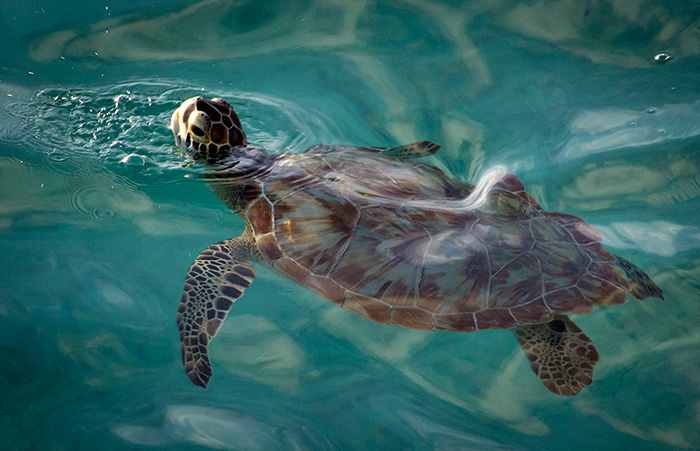 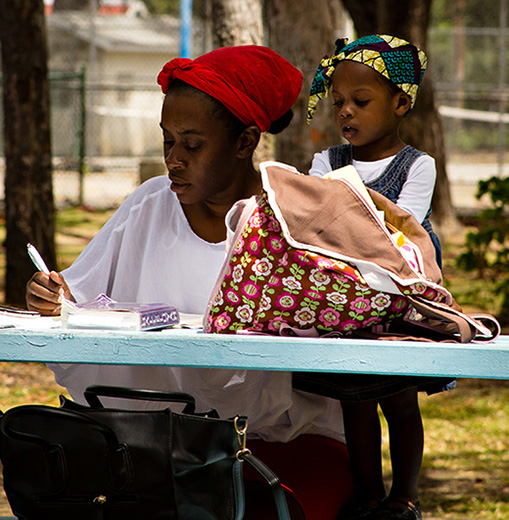 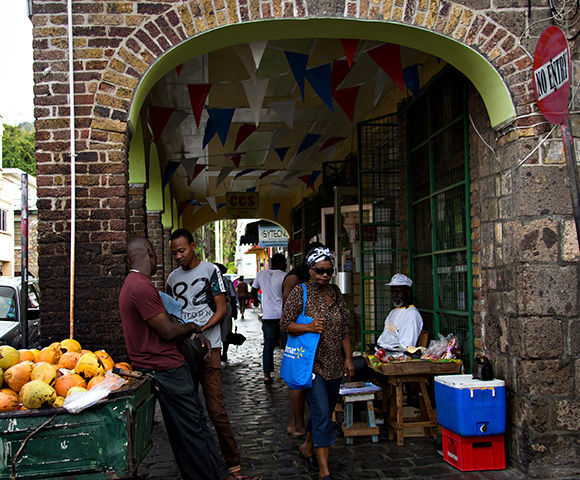 The European powers did not immediately conquered the archipelago, both for a certain lack of interest and for the high hostility of the Caribs.
In 1675 a ship of African slaves shipwrecked near Bequia. The survivors intermarried with the local populations of Arawaks and Caribs, creating a new mixed race, the Black Carib, also called ‘Garifuna’. These islands will be also the preferred choice of runaway slaves from neighboring islands.
In 1719 the French were able to settle, and in 1763 came under British rule. In addition to the wars with the French, who managed for some years to regain power, the British had to fight several battles with the indomitable local population that was however defeated definitively in the late 1700s. Most of them were deported as slaves on Roatan, an island off Honduras.
It became independent from the United Kingdom in 1979. 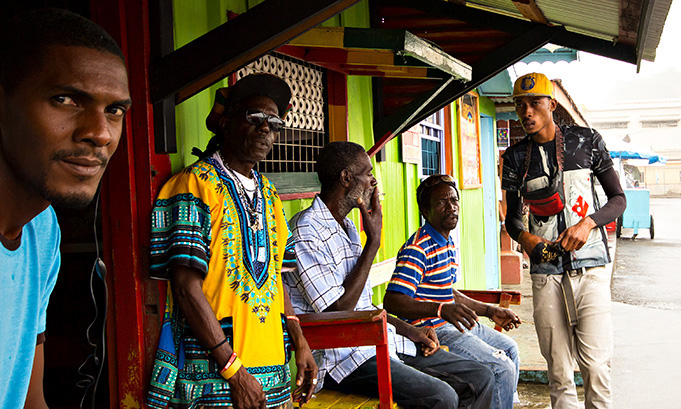 People in St.Vincent. As in Jamaica, the Rasta culture is very strong. The official language is English, but the spoken language is a sort of English dialect with Spanish, French, Portuguese, Indigenous and African influences. 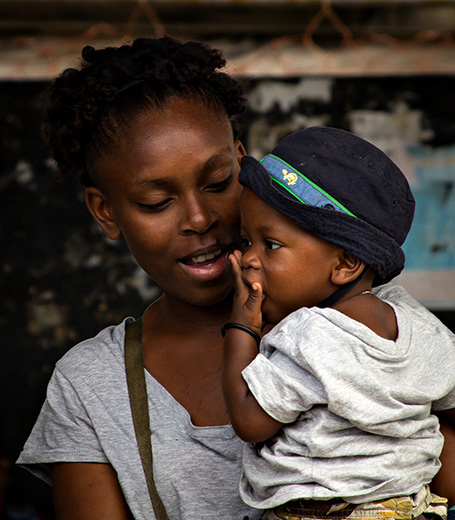 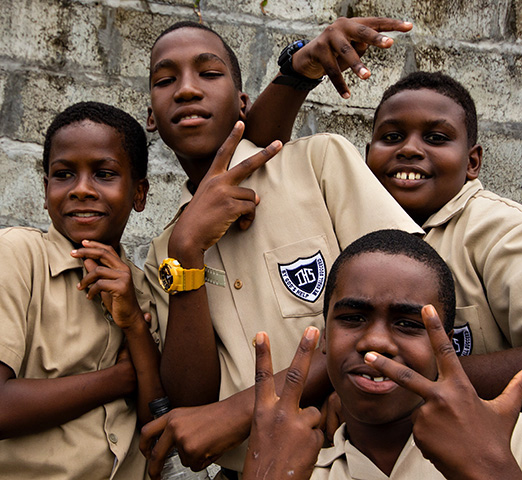 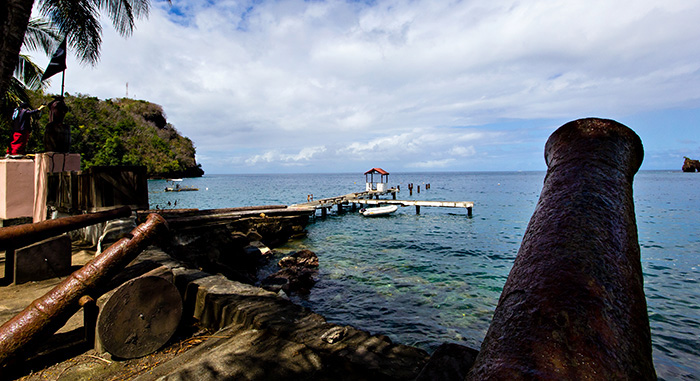 Several scenes of the film “Pirates of the Caribbean” were filmed at Wallylabu bay of Saint Vincent, as for example the first appearance of Johnny Depp, sinking directly on the pier. 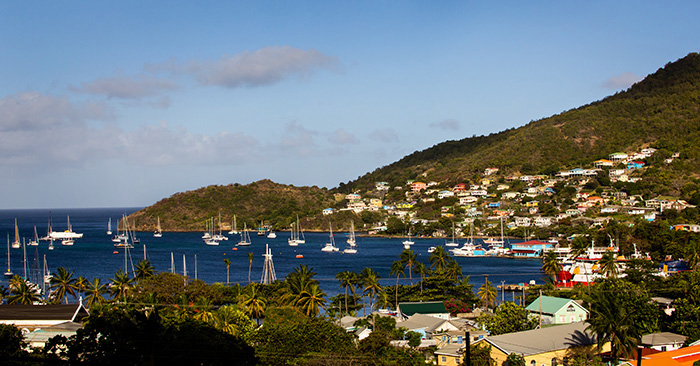 The main port of Bequia, the largest island of the archipelago after St. Vincent. 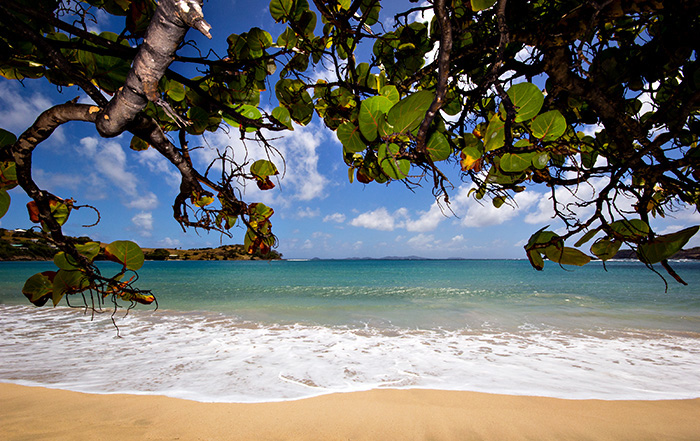 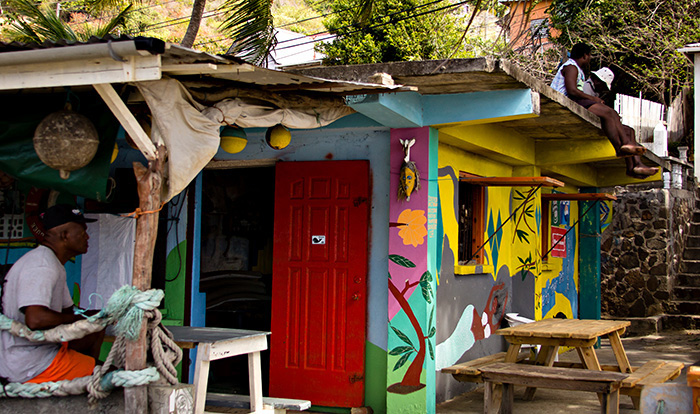 This bar is the meeting place of the last whalers in the world. In fact, the community of Bequia is one of the 4 communities in the world still allowed to catch whales by the International Whaling Commission. The other three are around the Arctic Circle. It is instead completely illegal the one carried out on a large scale by Japan, with hyper-technological tools and weapons.
It is likely that next year the permit will be revoked forever, since the community does not really need it anymore, being now able to survive by other means, for example tourism. In this moment the hunting is permitted from 1 February to 1 April. They can not catch more than 3 whales for year and can not use technological tools. 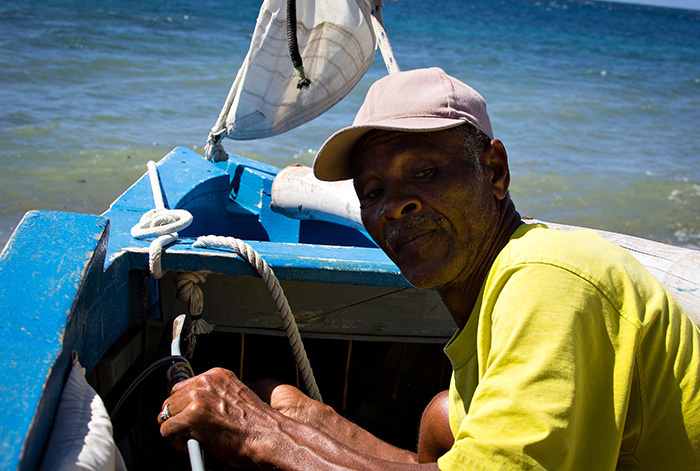 This fisherman caught the last whale, two years ago. 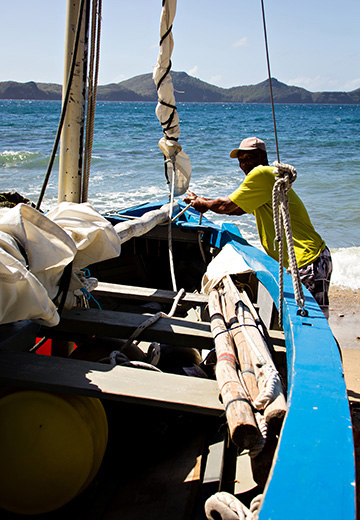 The boat used for hunting is not very big. The crew consists of 7 fishermen. Wen they spot a whale from a hill top, they run to the boat and try to reach it using the sail. To catch the whale, they use an harpoon attached to a long rope that is after twisted around a pylon in the rear of the boat. After an exhausting struggle, they approach the animal and and kill it using another harpoon. 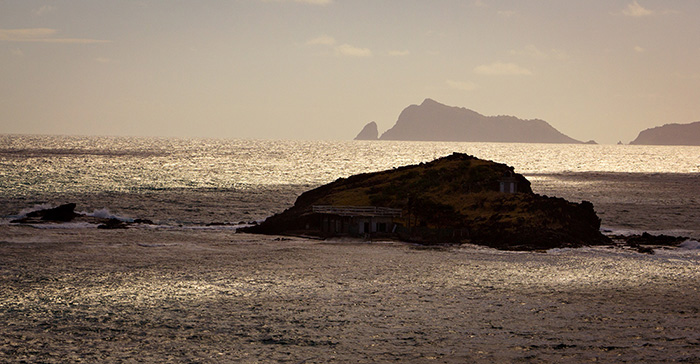 Once killed, the whale is brought on that little island and is torn to pieces. 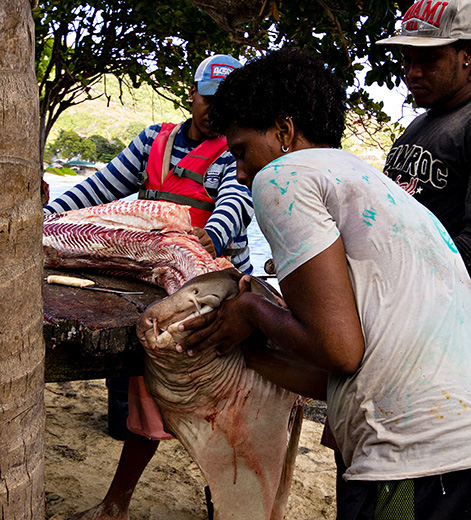 These fishermen have caught a shark instead. 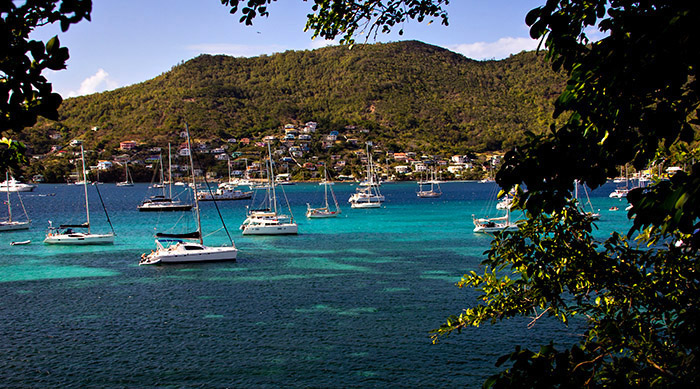 Ok, end of the first part. In one or two weeks I will write about Saint Lucia, Martinique and Dominica. See you soon!